Broil This Easy Blueberry "Pie" in Your Cast Iron Skillet

This easy blueberry "pie" is assembled in a cast iron skillet and run under the broiler just long enough to burst the berries and set the crust.

I was once told that Maine’s wild blueberries are grown by barons. For years, I pictured a high-ranking noble in extravagantly decorated, militaristic garb, walking among these perennial plants and commanding a field of workers: “Pick! Pick! Pick!”

Clearly, I’d misheard. Finally, someone spelled it out for me: Blueberries are grown in barrens. "Barrens," meanwhile, refers to something quite different from "barren"—they’re densely covered glacial plains that are ideal for growing tiny lowbush blueberries.

Sometimes called “the caviar of blueberries,” these berries are smaller, firmer, sweeter, and more tart than more conventional varieties, and they're very different from the cultivated, highbush variety found in most grocery stores, which tend to be watery, pillowy, and quite inconsistent in flavor. But it’s no matter to me; I’ll happily spend a quiet afternoon staining my fingertips purple while polishing off a pint of any type, raised by a baron or not.

There’s one surefire way to eat like nobility in the summer even if you aren't a baron, and that’s by broiling those berries with a good dose of brown sugar, as I do here in this very simple, one-skillet pie. Broiling can transform a so-so berry into something spectacular, in the same way a grapefruit half benefits from a brulée of sugar on the top.

Blueberries can sometimes be a bit mealy, but when you cook such berries down, their pulp turns into a saucier purée. You still want a slight snap from the skin, which means they shouldn't cook for too long, and you'll want a smack of piquancy to balance the sweetness, which can be ensured by adding some lime juice.

Lime zest, meanwhile, brings out the brighter side of the blueberries, perfuming the berries so much that it’d be downright boorish to leave the finished product to cool on a windowsill for too long before eating. I employ a bartender’s trick here, using sugar to extract the lime oil from the zest (see also: oleo-saccharum). I do this simply by macerating the blueberries, the lime zest, and some of the lime juice with sugar for several minutes while I prepare the graham cracker crust.

To turn these jammy broiled blueberries into a more complete dessert, I set out to make a super-quick version of blueberry pie. At first, I tried setting the berries directly on top of a graham cracker crust. But alas, whether that crust was blind-baked (blind-broiled?) or not, all the berry juices seeped into the bottom of the pan, turning this dessert into a blueberry beach of wet sand.

I knew that if I added cornstarch or tapioca starch to the blueberries as a thickener, the fruit topping would flow less, and the crust wouldn't get drenched. But I avoid such starches in blueberry pies; whether I'm just imagining the difference or not, I’ve always preferred the taste of straight-up fruit.

What I needed instead was a buffer—something in the vein of sunscreen, a creamy, water-repellant slick that would protect the crust below...except it had to taste delicious, not like SPF 50.

I eventually landed on adding a layer of regular old cream cheese, which comes prepackaged with gums and/or stabilizers to keep it from breaking even when hot, all of which works to this “pie’s” benefit.

With the wet-crust problem solved, I had arrived at my vision: blueberries augmented by a quick trip under blistering heat. Though admittedly bleeding blue blood, they retained a degree of structure, class, and royal-purple hue that any baron would be proud of. 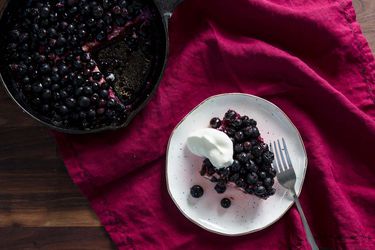