Yesterday we made breakfast tacos with soft scrambled eggs, bacon, and spinach. Today, we're going to tackle another form that I've often exchanged sharp words with: the potato breakfast taco.

What's the problem here? Well, there's the obvious starch-on-starch issue, but that's not so much a concern as it is a cause for celebration. The problem for me is textural. Soft tortillas wrapped around soft potatoes does not make for a satisfying bite; In order for potato tacos to be successful, there needs to be some sort of crispy element to them.

To achieve that goal, I took a lesson out of my french fry technique, in which I boil the potatoes first in acidulated water to soften them. You see, pectin, the cellular glue that holds vegetables together, doesn't break down very well in acidic liquids. So the idea is that by cooking in acid, you can fully cook the potato to its core without letting it fall apart around the edges, leading to shapelier fried potatoes with fluffier, more fully-cooked interiors.

While my potatoes simmer, I fried off some chorizo in a skillet, figuring that the spicy chorizo fat would make a good medium for crisping up the potatoes.

Once the potatoes are crisp, I adde some sliced scallion bottoms and a sliced serrano pepper—the only seasoning they needed aside from the chorizo fat.

While scrambled eggs are the traditional method for breakfast tacos—presumably to make them neater to eat while walking, standing, or driving—neatness is not what we're after here—pure deliciousness is the only thing on the menu. So rather than scrambled eggs, I decided to go with a sunny-side up fried egg, figuring the liquid yolk would make the perfect sauce for the crisp potato chunks.

With a bit of salsa, some Mexican crema, and some chopped fresh cliantro and scallions, it call comes together beautifully on the plate. Texture, flavor, and moistness, this is the stuff breakfast taco dreams are made of. 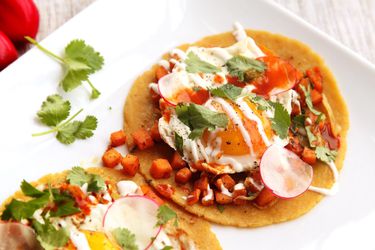 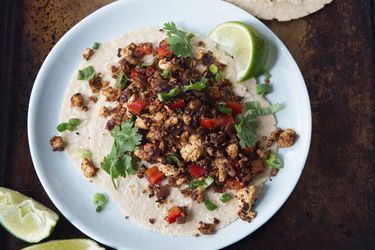