"Babcia" means grandmother in Polish, and this is a bread that my husband's grandmother would make for family gatherings. It was one item that Grandma made that my husband particularly liked when he was growing up, but until recently we thought the recipe was lost forever.

"I knew I got it right when I got an enthusiastic 'Oh, yeah' from my from my husband. This is the bread the way he remembered it, and this is what I'm declaring the final version."

What we didn't know was that many years back, when Grandma had visited her son (my husband's uncle), he translated and transcribed some of her recipes. Uncle belonged to a Polish social club that was putting together a club cookbook, and he submitted Grandma's recipes to the project.

When Uncle found out that I liked to cook, he sent us a copy of the cookbook. Much to my surprise, I found a recipe called "Polish Sweet Bread" with Grandma's name on it. I decided to give it a try, and immediately hit a few snags.

It's one thing to be able to cook something from memory when you've done it a million times. It's another thing to tell someone the recipe when you're not standing at the stove. Add to that the onset of Alzheimer's and the inevitable translation errors, and what I had in my hands was an incomplete and confusing recipe.

I forged on. First, I cut the recipe down to a manageable size. Then I matched the ingredients with the instructions. Then I baked. One of my changes to the original was to update the methods. For example, Grandma's instructions said, "knead about 20 minutes," and she wasn't talking about using a stand mixer.

My husband recognized the bread immediately, but I thought it wasn't quite right. Since Grandma wasn't working from a written recipe, her versions varied from batch to batch. My taste testers agreed that this could have been one of her versions, but I wasn't done with tweaking it.

That first updated version appeared in the November 2008 edition of the Left Hand Valley Courier, a newspaper that I write for. While I knew that recipe was a good bread, it wasn't Babcia Bread, so I've been working on the recipe on and off ever since. Recently, I came up with a recipe that was very close in flavor, but the color was off. So I went back into the kitchen and came out with this version. I knew I got it right when I got an enthusiastic "Oh, yeah" from my from my husband. This is the bread the way he remembered it, and this is what I'm declaring the final version.

As far as what this bread is, I don't know what it's supposed to be or where the recipe came from. It might have been born as a baba or a paska or any other number of holiday breads. But this is what it became in my husband's family, where everyone simply called it "Babcia Bread" because there was no one else who made it.

The bread is slightly sweet and a little bit eggy, but it's not dessert on its own and not for sandwiches, either. It's perfect for breakfast with a bit of butter and maybe a sprinkling of cinnamon, or toasted and topped with fruit and ice cream. 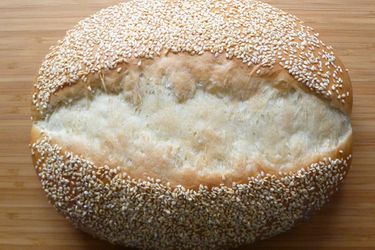