Stella Parks
Editor Emeritus
Stella Parks is a CIA-trained baking nerd and pastry wizard, dubbed one of America's Best New Pastry Chefs by Food & Wine. She was the pastry editor at Serious Eats from 2016 to 2019.
Learn about Serious Eats' Editorial Process
(13)
0

The portioned dough can be refrigerated in a heavy-duty zipper-lock bag up to 1 week, or frozen 6 months. Stand at room temperature until quite soft, about 70°F or 21°C, and proceed as directed. Though these chocolate chip cookies are best enjoyed warm, they can be kept for up to two days in an airtight container at room temperature.

With kitchen temperatures above 74°F (23°C), start by refrigerating the mixing bowl and dry ingredients until cooled to 70°F (21°C). At elevated temperatures, these ingredients and equipment can act as a heat source to the butter, warming the dough and causing excessive spread in the oven. 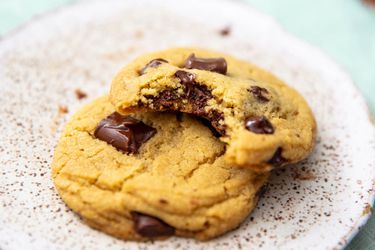