This rich Mediterranean spread is known as brandade in France, baccalà mantecato in Italy, and brandada in Spain.

You walk into a fish store. Your eyes scan the fillets, steaks, and whole fish on ice. You spot clams, shrimp in different sizes, scallops, cleaned tubes of squid, and mesh bags of inky black mussels. Your gaze drifts down and focuses on a wooden box filled with desiccated strips of yellowish cod, all crusted in salt. You realize that it's the source of that strong fishy odor snaking its way up your nose. A half-thought flashes through your mind—something vague about Portuguese stews made with salt cod, and a recollection that it's actually something you like. A few neurons fire, feebly suggesting to the decision-making part of your brain that you should consider buying it. Then you look up at the fishmonger.

"I'll have two of those salmon steaks, please."

Let's rewind the tape. Those neurons fire once again, broadcasting their tepid proposal. Instead of overriding them, other parts of your brain hear the call, and echo it. The demand grows. Suddenly you're reaching down, grabbing some tongs, and picking up a thick piece. It smells like fish that's been sitting in the sun for far too long, and it's not entirely pleasant, but your arm follows through anyway and drops the fish in a plastic bag. With a self-satisfied smile, you hand it to the fishmonger for weighing. That's right, you think. I'm gettin' me some salt cod.

Well, congratulations, especially if this is your first time. You could have taken the easy way out, but you didn't. You bought the stinkiest fish in the store, and now you're going to cook it. You will not regret this. I promise.

So, what to make? One of those fish stews wouldn't be a bad choice at all, but I want to suggest something else for this go-round. I want to suggest whipping it into a lusty spread, thick with good olive oil and garlic, that you'll slather on toasts, like the Iberian version of a bagel loaded with whitefish salad.

If you've never heard of it before, it's called brandade de morue in France, where it's particularly popular in Provence. Or, if you're in a part of Italy like Liguria or around Venice, they'll tell you it's baccalà mantecato. From the mouths of most Spanish speakers, you'll hear brandada de bacalao...unless you're in Castilla, in which case you may notice people adding nuts to it and calling it atascaburras.

There are small variations from one place to the next, but they're all essentially the same dish. In fact, in my own review of recipes from around the world, I've seen more variation within each country than I have between them. In France, for instance, some people mix mashed potatoes into their brandade. And some don't. Compare that to Italy, where some people add mashed potatoes...and some don't. Likewise with milk or cream: Some French folks include it, others don't. Ditto for Italy.

Salt cod is, as you might imagine, incredibly salty. The first step is to soak it long enough to leach out salt and return the fish to edibility. This is perhaps the one great inconvenience of salt cod, because it really does need a long soak and therefore requires a little pre-planning. I've done it in as little as eight hours with several changes of water, but it's a roll of the dice as to whether it will still be too salty or not after that. A much more reliable plan is to soak it for a full 24 hours, changing the water multiple times. Some people soak it in milk, but I tested it out and didn't find any major difference between that and water; water, meanwhile, is free, and milk is not.

Once your salt cod is done soaking, it's time to cook it. Fill a saucepan with enough water to cover the salt cod, add some aromatics like thyme, garlic, and a bay leaf, and simmer it for about 10 minutes. Then remove it from the heat and let it stand.

After it's cooled, drain the salt cod, reserve the cooked garlic (more on that below), then flake the cod into small pieces. Remove any bones you come across, and pluck away and discard the silvery membranes.

Brandade is often whipped with mashed potato, and it's entirely up to you whether to use it in your version or not. I like it both ways, but here's what to consider when deciding whether to add potato:

Some recipes call for a 1:1 ratio of salt cod to potato by weight, but I'd recommend only adding half as much potato, unless you want the mildest possible fish flavor.

If you do use potatoes, you can either bake or boil them, then mash them with a ricer, food mill, or potato masher. If you boil them, though, you should break normal potato-boiling rules by not salting the cooking water. It can be hard to know just how salty the cod will be even after it's been soaked, so it's better not to risk overly salty brandade by adding well-seasoned potato. You can always add salt later if it needs it.

Back in the old days, before electric kitchen appliances, brandade was made by beating the salt cod with a mortar and pestle while slowly adding the olive oil and other ingredients. That's pretty exhausting work, so, understandably, modern recipes call for tools like food processors to make brandade much easier to whip together. A food processor, though, creates a very different texture from the original by-hand method, since the blades chop the fish into teensy-tiny bits.

A better appliance for the job: a stand mixer fitted with the paddle attachment. As the paddle spins, it beats the salt cod almost just like a mortar and pestle would, except much, much faster. The fish breaks down into a spread while retaining texture, since the individual fibers remain more intact.

The real thing to remember is that brandade is not just a salt cod salad. It's not salt cod dressed in olive oil. It's a whipped emulsion, more like baba ganoush or hummus, or even pesto. That's why you can add over a cup of olive oil to the mixture without the risk of it turning greasy.

Start by putting the flaked salt cod in the mixer bowl, along with garlic, which can be either the cooked garlic from the fish-poaching step or raw minced garlic if you want a punchier flavor. With the paddle spinning, drizzle in the olive oil. It's impressive how much the fish can absorb without becoming too oily.

Next, beat in the dairy. As I mentioned, not all brandade recipes call for it, but I find that it helps to create a creamier, more emulsified texture than olive oil alone. You can use whole milk or heavy cream, though I like half-and-half, since it strikes a balance of being rich without being heavy.

If you're using potato, add it toward the end so it doesn't get whipped as much. Over-working the potatoes can release starch and make them gummy.

The final step is to adjust the seasoning and add optional flavorings, like minced parsley and lemon zest.

The whipped brandade is ready to be served straight from the mixer bowl, but I like it best when it's hot and browned on top.

To heat it up, spread the brandade into an oven-safe baking or gratin dish, then put it in a hot oven until heated through. A few minutes under the broiler will get the top browned and crisp.

Then serve it while it's still warm with some crackers or baguette toasts. Or, do as the Italians do and serve it on top of grilled or seared polenta.

I'd be willing to bet that anyone you serve this to will seriously consider buying their own salt cod the next time they're at the fish counter.

Potato is a common, but optional, ingredient in this spread. Using it creates brandade with a milder flavor and softer, creamier texture; it also yields a greater quantity of brandade by acting as a filler. If you decide to omit it in favor of a brandade with a more assertive salt-cod flavor and toothsome bite, cut the olive oil down to 3/4 cup and the half-and-half to 1/4 cup. The cooked garlic adds a mellow flavor to the brandade, but you can punch it up by adding 2 minced raw cloves during the whipping step. 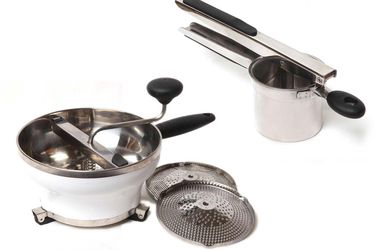 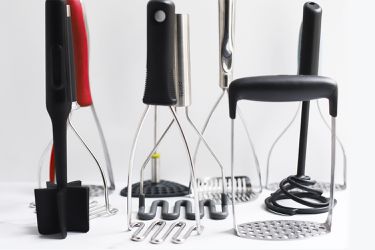 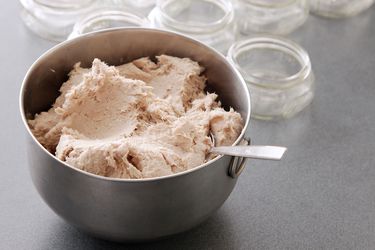