Rien Fertel is a writer, teacher, and the author of three books, including The One True Barbecue and Drive-By Truckers' Southern Rock Opera.

On the radio dial that is the human ear, Bourbon Street has a sound all its own. It's a sound you can sense from just about anywhere in the French Quarter. Even if you're blocks away, the air seems to vibrate with its low, steady hum of neon lights. Step closer, and the great din begins to take shape. It sounds like a prison riot: an ocean of voices punctuated by screams of pleasure and hints of pain.

Round the corner and take a step onto the street itself. The bars and nightclubs of Bourbon—their doors always open to invite easy access—pulsate with the rhythms of every page in the vast American songbook: from jazz and country to rock and soul, though these days it's most often pop and hip-hop. The street fills with a fantastic collage of noise—a sidewalk busker tap-dancing to a steel drummer; Beyoncé getting down with Jimmy Buffett—to create a symphonic cacophony. It's the greatest mashup you've ever heard.

New Orleanians love to disparage our city's most famous stretch of pavement. We see one of the world's most notorious tourist traps, filled with lascivious sights, noxious smells, and odious food and drink. But Bourbon's appeal is as diverse and inclusive as its soundscape.

I first caught an earful of the street during my early childhood, from behind the tinted windows of my grandmother's big black Mercedes. We'd drive through the French Quarter on our way to my favorite restaurants: the Hard Rock Cafe, Planet Hollywood, and the short-lived but never-forgotten Fashion Cafe. As we cut across Bourbon, I slunk low into those plush leather seats, all the while offering thanks and praise for those tinted windows. Outside, danger lurked. Dangerous sights and sounds. Dangerous thoughts.

Years later, while attending college across town, I embraced that danger. My friends and I would sardine into the largest vehicle available; six to ten underage kids with a yen to lose ourselves on Bourbon Street, where we knew we could always score drinks. The ones we craved were high in alcohol content and sweeteners, all of them served in garish plastic containers: Pat O'Brien's Hurricanes came in vessels shaped like the Venus of Willendorf, Hand Grenades in foot-long neon-green bongs, "Big Ass" beers in those glorious oversize cups. We'd gobble down Lucky Dogs, sold from hot dog–shaped carts on most every corner; we'd devour slices of heat-lamped pizza. I'd come home smelling like last week, regretting each and every next morning, but I'd happily pile back into the car when the next time came.

Today I am a teacher. And when I hesitantly set foot on Bourbon Street, it isn't uncommon for me to spy my high school students trying to score the same drinks I once did. It's harder now; there's more stringent policing. So, more often than not, they settle for the same greasy eats we once did. The music has changed, too—more Lil Wayne and less Creed, thankfully—but the soundtrack has stayed the same.

Recently that soundtrack has come under threat. French Quarter residents have sued individual bars for noise pollution—one homeowner going so far as to seek $20 million in damages. Earlier this year, the city council resurrected a noise ordinance that would limit the bass-heavy thump issuing from Bourbon. The current law, written before the ground-shaking invention of modern subwoofers, limits the street's noise levels to just 10 decibels above that of ambient sound, a level that, according to one university study, is equivalent to the din of conversation emanating from a restaurant, or the hum of an air conditioning unit 100 feet away. Then again, these sorts of debates are nearly as old as the street itself. An 1830s ordinance forbade "cries, songs, noise or otherwise" from disturbing "the peace and tranquility of the neighborhood." Rap might have replaced ragtime, but the auditory ambitions of Bourbon Street have not changed. God willing, they never will.

Today, same as yesterday, scrums of bachelor and bachelorette parties struggle for sweaty elbow room alongside packs of conventioneers and football freaks, suburbanites, and, why yes, locals. Locals who promise—this is the one and only time, I swear—to never be seen on Bourbon Street again. People fill the shops that peddle Mardi Gras beads and preserved alligator heads, howling and hooting at the countless bottles of hot sauce that guarantee to "light your ass on fire" and the morally, not to mention sartorially, questionable T-shirts ("I Got Bourbon Faced on Shit Street" or "This Looks Like a Job for Vodka!"). They stumble into bars and stumble back out double-fisting those portable plastic geegaws, the result of a late-1960s push to purposefully blur the line between the private space of businesses and the public arena of the street. Past midnight, their refuse accumulates, often ankle-deep, forcing late-night partygoers to march with a scrunch, scrunch, scrunch back to their hotels.

On almost every block, legitimate hustlers and small-time tricksters vie to extract greenbacks from the pockets and purses of the inebriated. Old men claim an uncanny ability to divine where "you got your shoes" (the trick, for potential rubes: You did not get your footwear at the outlet mall outside Bethesda, you got them—at this very moment!—on Bourbon Street). Strip-club doormen promise a paradise of the flesh, while tuxedo-clad waiters push menus in your face as they carnival-bark about the street's carte of culinary offerings: Seafood Gumbo! Jam-BO-la-ya!! Hot Boiled Crawfiiiish!!!

And yet, despite its garishness, its surrender to popular music and plastic cups and the latest manifestations of American debauchery, Bourbon Street still offers glimpses of New Orleans' genteel past. Wade through the sea of shorts- and sweatpant-clad tourists to Galatoire's, and you will find men in matching seersucker suits—jackets are still required here—feasting on turtle soup and eggs Sardou that they wash down with an unfathomable number of Martinis and Sazeracs. Day or night, the dining room always includes at least one table of genteel ladies sporting ludicrous headwear—time travelers from another place and another era, feeling right at home in this 110-year-old restaurant. Their voices rise with each cocktail, reverberating off the tiled and mirrored walls.

This is all to say that, at nearly 300 years old, Bourbon Street's history covers much more than "widespread ambulatory inebriation," in the words of its leading scholar, Richard Campanella, author of Bourbon Street: A History. The story of Bourbon Street contains multitudes.

If we could spatially layer time upon itself, making it possible to walk down the Bourbon Street of today while simultaneously promenading down the same street of the 1970s, the 1930s, and so on into the past, we might find its dissonance quite deafening. Diners could order enchiladas at the long-shuttered Mexican restaurant La Lune, followed by a visit to Chinatown, once spanning the 500 block of Bourbon, and noodles from Dan's International, which helped introduce Chinese and Japanese food to the city. Lucky Dog vendors would shout for customers outside the bustling oyster saloons that once crowded the corridor. William Faulkner, who lived blocks off of Bourbon for a brief stint during the bohemian 1920s, could trade stories with Elvis, who filmed King Creole on and around the street decades later. Burlesque drumbeats would meld with arias issuing from the French Opera House, one of the nation's first great theaters, which operated on the corner of Bourbon and Toulouse until a fire destroyed the building in 1919. The hush of the city's first public library would compete with the Desire line streetcar, which clanged down Bourbon before winding its way into Tennessee Williams's imagination. Reverent voices from the Protestant Christ Church, Touro Synagogue, and the Convent of the Holy Family, all former Bourbon Street–area houses of worship, would lift heavenward as one.

On a recent Thursday afternoon I strolled down the length of Bourbon Street, walking past dozens of empty bars, all of them open, all of them blaring their deafeningly loud music. I passed what New Orleanians call the Lavender Line, a.k.a. St. Ann Street, which has separated the frat-fueled Bourbon from the gay-friendly Bourbon since the 1930s. In the 900 block, where the street suddenly shifts to a residential neighborhood, I came across a sound I'd never heard in all my years of traipsing this street. "Spare a minute for Planned Parenthood?" a young woman asked in a mousy voice, clipboard in hand.

"Bourbon Street might just be one of our nation's great democratic spaces."

This, I thought to myself, is why Bourbon Street matters. It is a space in constant flux. Today, a woman can fight for women's reproductive rights. Tonight, as on many nights, a group of protesters can preach the word, while holding placards reading "Turn to Jesus or Burn in Hell" and "Are You God's Barf? Repent Sinner." Bourbon Street, narrow and just 13 blocks long, contains enough room for both voices, and every cry, song, and noise in between. Despite the street's thick veneer of sleaze, despite its tawdry and tacky atmosphere, Bourbon Street might just be one of our nation's great democratic spaces.

I signed my name on the woman's clipboard, pledging my allegiance to Planned Parenthood, and gave a small donation, but not before checking that I had enough money to spare for a pint. Just steps away stood one of my favorite drinking holes, Lafitte's Blacksmith Shop—built circa 1722, it's deemed "the oldest structure used as a bar in the United States." People spilled into the street, screaming, laughing, and dancing to the music. I jumped inside for a beer. And as I sat at a sturdy wooden table by the bar's big stone fireplace, the cacophony of the Bourbon Street began to fade. By the time I was halfway through my pint, it all but disappeared. 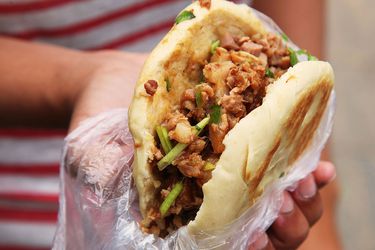