To anyone familiar with Boston's restaurant scene, reading an article that gushes about Barbara Lynch's food is about as informative as being told that the Sox made an odds-defying comeback in the 2004 ACLS, or that farm-to-table dining is in. Yes, her food is stunning. Yes, she's one of the most ass-kicking, critic-humbling, and well-respected chefs in the country. But it's old news.

That said, there's no way to write a column about iconic Boston dishes without including her (this is likely the first of several Lynch dishes I'll cover), so what I hope I can bring to the table are a few tidbits of info about this particular dish—her famous Bolognese sauce—that maybe haven't been quite so well documented.

Let's start with a story, as recounted to me by one of the chefs at Sportello, Lynch's modish Italian "diner" in South Boston's Fort Point Channel area where the dish is a mainstay. (Think bar stools along a zigzag counter, boutique provisions, a few meticulously chosen wine options, and a small fleet of chefs manning the open kitchen, all clad in classic Lynchian black striped aprons.)

Several years ago, Lynch was catering a friend's wedding, and the guest list grew considerably at the last minute. She and her team needed to plan for more food, and the bride had a specific crowd-feeding dish in mind: an Italian family friend made a Bolognese sauce that she (the bride) was particularly fond of; she hoped that Lynch could spend a day learning to make the ragu with the friend, and then replicate that recipe for the big day.

It must have turned out well, because the sauce makes regular appearances on the menu at No. 9 Park (her flagship fine-dining room in Beacon Hill) and The Butcher Shop (her carnivore-tempting bottega in the South End), and (with very slight modifications) is the signature dish at Sportello. It's a recipe she feeds to the well-heeled pupils who crowd her South End teaching kitchen/bookshop, Stir, for cooking classes, and second only to her prune-stuffed gnocchi (likely topic for a future post) and tomato tarte tatin, I'll bet it was one of the most anticipated recipes to be published in her gorgeous cookbook (also Stir) last year. (See the cover photo--and page 121.)

"it's not your average bowl of spaghetti and meat sauce."

Needless to say, it's not your average bowl of spaghetti and meat sauce. For one thing, the tagliatelle (which, I was once told by Lynch's local contemporary, chef Dante de Magistris, who makes my other favorite bowl of Bolognese, is the traditional noodle on which this sauce is served in Bologna) is perfect: springy, eggy, and light, with just enough chew. It's my go-to pasta recipe. (Sorry, Marcella.) Meanwhile, the sauce is unctuous and complex, yet straightforward and clean-tasting.

The highlights: Three meats: veal, pork, and lamb, the latter of which, Lynch writes in the recipe headnote, "gives it character." Dry red wine and chicken stock. A little heavy cream at the end. And the most intriguing element: chicken livers, sautéed early on with the mirepoix. Along with the lamb, they're responsible for sauce's the faint gaminess (more character development, in my book), not to mention its rich, silky—dare I say slightly creamy—consistency that helps it cling so nicely to the pasta. Or (if you make it at home; the recipe is very approachable) just a spoon. 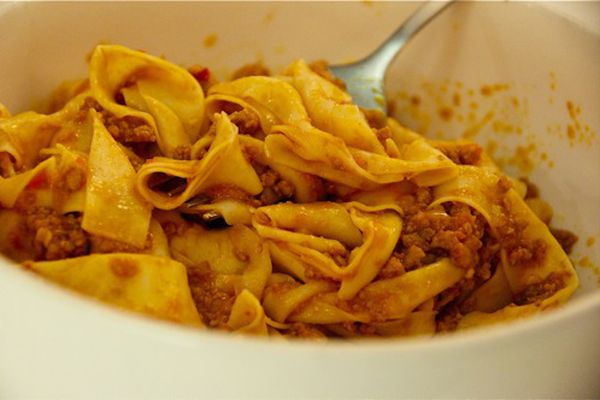 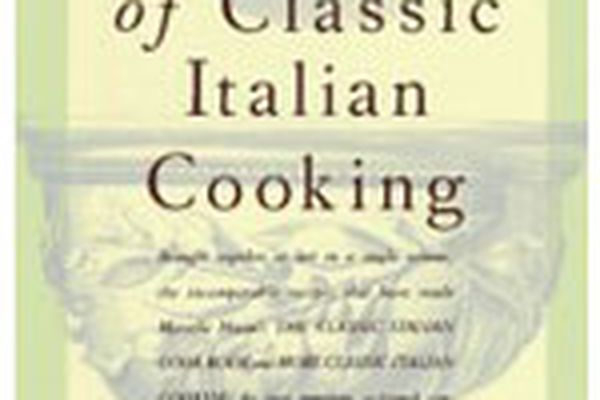