The recipe and introductory material are by Korean chef Seoyoung Jung, as told to her collaborator, writer Sonja Swanson.

Bossam—thin slices of velvety boiled pork belly wrapped in cabbage with fresh, crunchy kimchi and seasonings—can be eaten any time you're craving a flavorful, meaty feast. But in Korea, there’s one time of year when we always, always eat bossam: at the beginning of winter, right after finishing our annual kimchi-making process. We call this tradition gimjang, and it’s a long, labor-intensive process.

Just to give you an idea of how much work it entails, my mother-in-law used to do gimjang with anywhere from 200 to 300 heads of cabbage. One head of cabbage easily weighs anywhere from three to four kilograms (six and a half to nine pounds). Imagine cutting, brining, and rinsing hundreds of them. And that’s just day one. On day two, you have to shred dozens of mu radishes (Korean radishes that are, again, easily three kilos each) and mix gallons of chile powder, fish sauce, garlic, and more before slathering this "stuffing," called sok, onto every single leaf.

That's why gimjang is typically a community event. You have to help each other—there’s simply no way one person could do all that work alone. During gimjang, on the day after all the cabbages were brined, my aunties and grandmother would gather at our house. We’d sit together, mixing and spreading the sok onto the cabbage leaves. (Though technically I didn’t do very much work; I’d mainly run around to different aunties, getting bites of fresh kimchi from each of them.)

Meanwhile, my grandfather would be busy at the firepit in our courtyard. There, he'd light a fire under a large cauldron and begin preparing bossam for everyone. Once the last of the kimchi was packed away in clay pots buried in the yard, it was time to eat. Back when meat was more precious, sharing such a feast was a way to celebrate gimjang and show gratitude to all the people who'd come to help out.

Well-prepared bossam features pork that's tender but still holds together, and it’s best when layered with a variety of seasonings in a vegetable wrap. Bossam platters can get really fancy (some even include raw oysters or fermented skate), but my perfect bite of bossam is a bit simpler.

I start by tearing off one leaf of Napa cabbage that's been brined in salted water long enough to season it nicely and give it a tender texture. Then I take a piece of pork and lightly dunk it into a dip made from equal parts saewoo jeot (salted shrimp) and soju, plus a few extra seasonings. I place the pork on the cabbage leaf, followed by one sliver of raw garlic and a touch of ssamjang (a savory dipping sauce made with fermented chile and soy). After that, I pile on three pieces of mu malaengi muchim (rehydrated dried radish strips seasoned with chile, garlic, and something sweet); alternatively, you can use fresh sok if you've just done gimjang. If you’re a huge fan of heat, you can add one slice of a spicy green chile into your ssam, or wrap, as well. Finally, I wrap the cabbage leaf around it all and eat it in one big, delicious bite. (For a visual step-by-step guide to assembling a bite, see the recipe directions below.)

As you prepare your bossam, keep in mind that in Korea, not all meaty flavors are considered good. Most traditional recipes attempt to remove certain funky flavors and aromas from the meat during the cooking process. To do so in my recipe, I first rinse the raw pork belly and then briefly blanch it in boiling water. You can blanch it in plain water, or you can use the starchy water collected from rinsing rice, which is prized in Korea for the subtle starchy flavor it adds to foods.

Next, I simmer the pork in a poaching liquid that I've already infused with bay leaf, cinnamon, ginger, doenjang (Korean fermented soybean paste), and alliums like scallion, garlic, and onion. Some people even add instant coffee to the water to further cover up and strip away any strong porky notes. (Many, if not all, of these poaching ingredients are ones that you’ll already have on-hand if you’re doing gimjang; since you’re already doing a ton of work for the kimchi, you might as well keep your bossam easy.)

Color is also pretty important to us: If you want your meat to look a little darker, you can add more doenjang to the pot, and leave your onion skins on. That instant coffee I mentioned before also helps add color to the pork.

Once the meat is fork-tender, I take it out and shock it quickly under cold running water. You don’t want it to get cold, but the idea here is to tighten up the surface of the meat just enough that it'll hold together when you slice it thinly.

On your bossam platter, you’ll want to have either the sok from your gimjang, if it’s that time of year, or mu malaengi muchim (seasoned, rehydrated radish) for a spicy, crunchy kick. There's no need to make your own mu malaengi muchim—you can find it at any Korean grocery store—but sok is the kind of thing you'll need to prepare at home.

In the rare event that you actually have any bossam left over, you can vacuum seal it or wrap it tightly in plastic wrap and keep it in the fridge for about three days. For longer storage, you can also freeze the meat, microwaving or steaming it to reheat (the latter will help it retain moisture).

Ssal-ddeumul (쌀뜨물, or rice-rinsing water) is a useful ingredient in Korean cooking, both for its nutrients and the mild, starchy flavors it adds to food. Use the cloudy water that runs off from the second or third time you wash your uncooked rice (not the first, which might have dust and other impurities). Rice-rinsing water is optional for this recipe, but I find it helps get rid of the pork's funky, meaty smell, which is not typically considered desirable in Korean cuisine.

The cabbage leaves can be brined, drained, and then wrapped in plastic and refrigerated up to one day in advance. 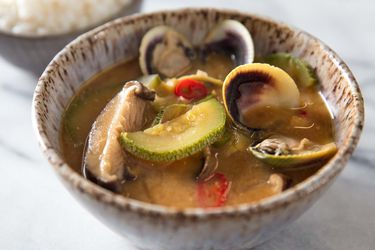