This easy black-eyed pea stew with spicy andouille and hearty kale is a flavor-packed one-pot meal.

This isn't the first kale, black-eyed pea, and sausage soup I've made, and it probably won't be the last. The ingredients are custom-made for each other, both from a flavor and a nutritional standpoint. This one, made with smoky andouille sausage and pork belly with tender beans and braised kale in a spicy broth is the kind of dish that can get you through a winter without ever having to eat anything else. Not that you'd want to, but you could.

I think I've mentioned this in the past: I'm a pretty lazy guy. Not in the "I think I'll sit on my butt all day and veg out in front of the TV" kind of way, but in the "given option A and option B end up at similar end results, and option A is way easier than option B, I'll choose option A" kind of way. Faster, easier routes to delicious food are always something I'm on the lookout for. As much as I like getting heavily invested in an all-day cooking project, I absolutely love simple recipes like this one that maximize the deliciousness-to-work-required ratio.

This particular version takes a bit of a Cajun approach, starting with sliced smoked andouille sausage. Cajun-style andouille (not to be confused with French andouille) is a "double-smoked" sausage: It starts with a cold-smoked Boston pork butt that is ground coarsely, seasoned heavily with garlic and other spices, and stuffed into casing. It then gets hot smoked to cook it and impart a second layer of smoky flavor.

What does this mean for us? It means an instant flavor boost in our stew with very minimal work.

I sauté sliced andouille along with chunks of salt pork in my Dutch oven until well browned before adding my vegetables. Taking another cue from Cajun cuisine, I use onions, green bell peppers, and celery, A.K.A. the Holy Trinity of Cajun cooking. To that base, I also add some leeks and garlic, along with a pinch of red pepper flakes and finely diced jalapeño pepper for some extra heat. As the vegetables release liquid, you should be able to use that liquid to scrape up the browned bits from the bottom of the pan.

After the vegetables have softened, I start adding in my kale. Like most greens, kale will lose a ton of volume as it cooks. I like to add a few handfuls, give it a quick stir, cover, and cook gently until it wilts before adding in more.

In the past, I was the kind of guy who would add my broth and greens at nearly the same time, thinking that the greens would just cook down in the broth. But last year, Chef Marco Canora of Hearth restaurant showed me a different technique. By sautéing greens in your pot and cooking them down before adding your cooking liquid, you develop a much more layered, clean flavor in the finished dish.

Once the kale is in, I add black-eyed peas (which, I've discovered, are better when un-soaked just like black beans), some chicken stock (either homemade or store-bought low-sodium chicken stock is fine), and a couple bay leaves before letting it simmer.

A shot of cider vinegar stirred in at the very end adds some brightness to balance out the richness of the pork.

The best thing about this kind of soup is that it only gets better when you make it ahead. I made a few huge batches of it last week and packed it into cryovack bags for a camping trip.* I can tell you that there was nothing I wanted more after a long day of hiking than a big pot of this stew.

Pro-tip: pack soup or stew into cryovack bags, freeze flat, and use in place of ice or ice packs in your cooler for your next camping trip. Keeps your food cold, minimizes weight, and gives you an extra meal too!

*Ok, fine. It was a small day of taking leisurely walks through the woods with the dogs followed by lots of cooking on a campfire. But still. You know what I mean. 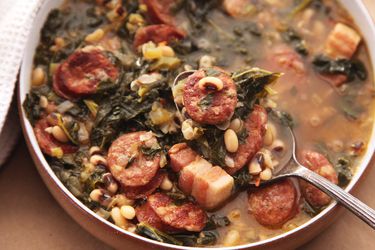