Between the Sheets Recipe

Like a Sidecar amped up with white rum; fresh, bright, and boozy.

The name may come across as downright demure in the modern era, but the Between the Sheets bordered on the eye-winkingly naughty when it debuted in the early 1930s.

Simply a variation on the Sidecar, the Between the Sheets takes the classic trio of cognac, lemon, and orange liqueur and tinkers with the flavor by swapping out part of the base spirit for the brighter character of light rum. The taste is still Sidecar-ish, but there's a little rummy extra in the mix.

This recipe is an adaptation of an adaptation; early versions called for just a dab of lemon, which makes way too sweet and strong of a drink, and should you find this version still on the sweet side, just squeeze in a little more lemon juice.

For best results, use a more full-flavored light rum such as that from Flor de Cana or Banks 5 Island, or vary from the recipe by going for a darker aged rum. (Should you be looking for a way to use that bottle of Ron de Jeremy you bought for the novelty of it, it's probably not only keeping in character but also flavorfully appropriate to toss a little of that into the Between the Sheets.) I also suggest using Cointreau in lieu of another triple sec; it's more expensive, yes, but that's for a very good reason—plus, with nouveau-burlesque star Dita von Teese as its spokesmodel, it's also in keeping with the drink's wink-wink nudge-nudge theme. 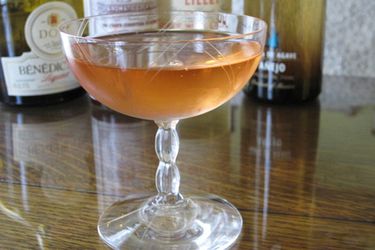