As a Serious Eater who has dipped my toes into veganism, it's time to start down the road of coming up with fully satisfying, 100% plant-based versions of some of my favorite holiday dishes. And what better place to start than the king of Thanksgiving? No, I'm not talking about the turkey. I'm talking stuffing. It's by far my favorite part of the meal, and something that I look forward to every November.

As someone who's spent an inordinate amount of time coming up with dishes like Vegan Cheesy Baked Potatoes, Fully Loaded Vegan Nachos, Vegan Chili, and even Vegan Burgers That Don't Suck, I only have one requirement for my vegan recipes (beyond the whole plant-based thing, that is): They must be good enough that even an avowed meathead would gladly down them.

I've been making my Classic Sage and Sausage Stuffing for years, and to me, it's the quintessential Thanksgiving stuffing. So that seemed a good place to start my vegetarian version. I sliced up enough loaves of bread to make a half dozen batches of stuffing (the minimum number I figured I'd need to nail this recipe), tossed them in a low-temperature oven to dehydrate,* then got to work on the rest of my ingredients.

*As I've discovered, the key to great texture in stuffing is dry bread, not necessarily stale bread. The two are not the same thing! Bread dried in an oven becomes crisp and dry, while stale bread is leathery and chewy.

Obviously, the sage sausage that the meaty recipe calls for was out of the question, so what to use instead? This isn't my first vegan rodeo, and I know what kinds of things I like in my foods. The first thing to get out of the way: This is a vegetable-based stuffing, not a faux-meat stuffing. You want textured vegetable protein or seitan in your mix? Look elsewhere.

From working on a recipe for vegan mapo tofu and a vegan Bolognese sauce in the past, I knew if treated right, mushrooms make an excellent stand-in for the tender-chewy texture and rich umami flavor of ground meat.

To get mushrooms the right texture, either pinch the caps between your fingers to break them up into rough, uneven chunks, or give them a rough chop and then pulse a few times in a food processor.

This is one of those times when the fancy restaurant knife skills are  worse for the finished product than the rough chop from a food processor. Those unevenly shaped nubs give the finished dish plenty of texture.

Cooking mushrooms is often a waiting game. They are so porous and spongy it takes a looooooong time before they've expelled all of their moisture.

The aromatics I use for this version of stuffing are no different from those in my classic stuffing. An onion (along with a leek, if you'd like), celery, garlic, and chopped sage are where it's at.

Alliums like onions, leeks, and garlic contain more natural sugars than mushrooms. As these complex sugars begin to caramelize, they break down into smaller, sweeter simple sugars. This is what creates the intense sweetness of caramelized onions or slow-roasted garlic. It's good in some situations, but sweetness is not on the menu for this stuffing (we get enough of that with our extra-sweet roasted sweet potatoes). And since there's no browning without caramelization in a high-sugar situation, we don't want to take the vegetables anywhere beyond simply softened.

The next item in the great stuffing equation? The stock. In a traditional stuffing, that would be a rich poultry stock. For our vegan version, I wanted a stock every bit as richly flavored. Before we go any further, take this word of warning: Don't even think about using store-bought vegetable stock. It's rarely good, with overly sweet flavors and no richness or depth.

In fact, leading up to this recipe, I even toyed with the idea of doing a full-on store-bought vegetable stock. Not a single brand would have made it past the initial qualifying rounds. You want a good vegetable stock? You must make it yourself.

To bulk up the flavor even further, I give the stock (which I keep a supply of in my freezer) a quick simmer with the scraps from my mushrooms and vegetables. If you're making the stock from scratch just for this recipe, you can go ahead and add your trimmings as the base stock simmers. The results will be the same.

With the mushroom/sage mixture and an excellent stock, my base flavors were right, but the stuffing was still missing something. Even with a crisp baked top, I longed for a bit of texture inside. Crunchy vegetables weren't quite right. Dried fruits were better, but they added their own distinct flavor—I wanted something more neutral.

I folded it together and gave it a taste, seasoning it with salt and pepper. I gave it another taste, and another, before finally holding back my right hand with my left before it had a chance to feed me the whole thing straight out of the pot.

With deep flavors and a rich, moist texture, there's really nothing more you could wish for in a good stuffing—whether it has meat in it or not is not even an issue here. It's just tasty, period.

To round out your vegan holiday table, try this holiday roast and of course, vegan stuffing waffles the day after.

This recipe requires you to make a batch of hearty vegetable stock before beginning. I strongly recommend using the recipe instead of store-bought vegetable stock. When making your own stock, add any extra vegetable or mushroom trimmings for extra flavor. If keeping the dish vegan is not of concern to you, feel free to substitute homemade or store-bought low-sodium chicken stock for the vegetable stock, butter for the olive oil, and add an egg along with the stock. 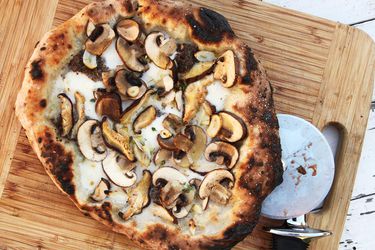