Ride the N train past Times Square and Central Park, rumble past the Silvercup sign and the GE power plant, and you'll find yourself in a food neighborhood that, even by Queens' culinary standards, is pretty special.

Welcome to Astoria, home of the city's greatest Greek food and shawarma. It's where neighborhood sausage shops and Italian delis are still part of daily life, and where cafes line the streets with games of backgammon and strong mint tea, or tiny cups of even stronger coffee with flaky phyllo pastries.

Today, Astoria is one of New York's most diverse neighborhoods, with Brazilian, South Asian, Balkan, and Middle Eastern communities joining the Italians and Greeks who've lived there for generations. And as more monied residents move in from Manhattan and Brooklyn, new restaurants open every day—you'll now find coffee shops selling Dough doughnuts and $16 kale sandwiches.

But the neighborhood's culinary core—what it does best, and what you'll find little of elsewhere in New York—is decidedly Mediterranean and Middle Eastern: Greek tavernas, Italian-American delis, and Palestinian sandwich shops. If you're visiting the neighborhood for the first time, that's what you should tuck into first. Plenty of places do trendy food, but only Astoria does gyros and octopus this well.

Here's a day-long itinerary to help you navigate the best of what the neighborhood has to offer. With so many good places to eat, I'm making this a choose-your-own-Mediterranean-adventure, so get some friends together and come hungry.

Breakfast in Astoria demands a Greek pastry, and there's nowhere better to get one than Artopolis, the neighborhood's finest Greek bakery (and honestly, the only real excellent one). The location, a grubby strip mall called the Agora Plaza, doesn't inspire much confidence, but inside is a world of sheer curtains cradling buttery tea cookies, phyllo pastries dripping with cinnamon-spiced syrup, and crackly breads fresh from the oven.

Going sweet? Galaktoboureko is the bakery's specialty: a creamy semolina custard baked between layers of phyllo that's crackly and well browned on top, soft and sweet underneath. (It's even better than the baklava.) But me? I go savory with the halloumopita, an aromatic single-serving loaf-let of bread with cooked onions, cilantro, and fat chunks of halloumi cheese baked inside. Ask them to warm it up so the cheese softens and squeaks, then dig in with a Greek coffee that's as bracing as you could hope for.

I lived in Astoria for four years, and by far my favorite thing about it was the markets: family-owned butchers and delis, counters loaded with olives and feta, and homemade charcuterie varieties that Williamsburg has never heard of. All of which is to say: don't miss out on some shopping.

There are small shops beloved by locals, like Parrot Coffee for its Turkish meats, jarred goods, and amazing yogurt, or Sorriso for its top-notch heroes, but on your first visit to the neighborhood, hit one of the big guns.

Titan Foods is a one-stop shop for everything Greek, but the olive and feta cases are particularly great. Go ahead and [politely] ask the cheesemongers for some tastes and you may even realize, horror of horrors, that you prefer Romania or Bulgaria's feta to Greece's. And don't miss the bakery department, which does sweet, syrup-soaked orange and walnut cakes that make a worthy second breakfast.

For something meatier, hit Muncan Food Corp., an Eastern European charcuterie specialist based out of Ridgewood. Maybe you'll like the lamb prosciutto or black forest bacon. I dig the jumari, chewy deep fried nubs of pork and fat, scooped up and served warm in paper bags like so much movie theater popcorn.

Euro Market is another wonderful meat shop, which features slabs of smoked and dried ribs alongside hazelnut and wine sausage. The big bonus here: lots and lots of beer from all over Europe, particularly the Eastern side. It's Astoria's largest source of weird beer, and it even sells a few brands of kvass, a fermented beverage of vegetables or rye grains.

Palestinian shop Duzan might sell the city's top chicken shawarma, juicy dark meat spiced with cumin and coriander and left on the spit long enough to develop a crackly crust. It's stuffed into the poofiest homemade pita, topped with vegetables and pickles (insist on many pickles), and slapped with creamy tahini and the option of some fiery, oily hot sauce. (The foul moudames, creamy, spicy fava beans, are also well worth an order, and the falafel's a winner, too.)

Traditional Greek pork gyros = pork shawarma, and BZ Grill is best in class. Thin slices of marinated pork spin round and round until the fat renders and forms of a blistered, craggly crust on the spit. Each toasted pita gets a small mountain of sliced ultra-porky pork and just enough tzatziki, lettuce, and tomato to cut through the fat. This is what a real gyro looks like.

For beef and lamb shawarma, you have to visit the king: the King of Falafel and Shawarma, once a cart, now a green-skinned truck that serves massive portions of chicken, beef, and falafel over rice on Broadway. The marinated and spiced chicken here is no slouch, but the beef and lamb, with sweet spices that tame the meats' gaminess, is the star. (As is the crisp on the outside, moist on the inside, generously spiced falafel, which the staff will occasionally pass out gratis to the line.) Skip the lame pita and order your helping over rice, and be sure to ask for plenty of turnip pickles, necessary acidity to stand out against the white sauce, nutty tahini, and fierce hot sauce that follow.

King of Falafel and Shawarma

By now, if you've done things right and been liberal with your free samples, you may be feeling a little sluggish. And pizza's not what you'd usually call a pick-me-up, but hear me out.

The pies you'll find at Rizzo's, a 50-year-old slice joint on Steinway Street, are unlike any other pizza in the city. (Well, not strictly true; they have two locations in Manhattan, but those lack the old school charm of the original.) The square pies' crust is thin—not cracker-like, but close—and topped with a heady, concentrated, sweet and tangy stew of tomatoes. Each slice gets a thin strip of low-moisture mozz and a sprinkling of savory Romano, and the result is a thin—dare I say light—pizza with an amazing depth of flavor.

There are many worthy pizzas in Astoria, but Rizzo's is by far the most distinct, and it's easy to eat on a food crawl without weighing you down.

Ready for a drink? I thought so. Most Astoria tour guides will tell you to visit the Bohemian Hall Beer Garden, and on a breezy afternoon, when it's not too busy, there's nowhere I'd rather be. But the crowd turns rowdy toward the evenings, and if you visit in colder months, the all-important tree-canopied outdoor space will be closed.

So I'm sending you to one of those newfangled trendy places, exposed brick, Edison bulbs, and all, though at two years old, the Queens Kickshaw is starting to feel like an old hand in the neighborhood. More importantly, they have an utterly unique list of beer, wine, mead (!), and—the cafe's heart and soul—cider. That means dry American ciders, traditional English and French varieties, and my favorites, gnarly Spanish sidra. The well balanced, barely effervescent Valveran Vintage Brut is a worthy introduction to the style.

You can stay for a bite, too—the grilled cheese is tops—but these days I find myself stopping in at the bar for a drink before dinner, the best time to catch the Astoria sunset through the massive front window.

Dinner: Get to the Greek(s)

Much has changed over the years in Astoria, but its Greek fare is still excellent. Everyone has a favorite taverna, and few of them are outright bad, but easily the most popular is Taverna Kyclades on Ditmars Boulevard. Here's some real talk: avoid it. Well cooked but virtually unseasoned fish and lame sides don't justify two hour waits. Where should you go instead? Well, that depends on what you're looking for.

For seafood: E Taverna is a wee, charming little space serving some of Astoria's best octopus. The tentacles are grilled to a serious char, then washed with good olive oil, a fistful of capers, and acid for a dish that honors plain grilled Greek octopus while also taking it in new directions. Mussels steamed with tomatoes and feta are also excellent, and the rest of the small plates menu is full of pleasant surprises.

For vegetables: Prefer the vegetable-heavy mezze to grilled fish? Head to Telly's Taverna for creamy, oniony stewed gigantes beans, crackly fried zucchini, boats of simple romaine and feta salads jolted by pepperoncini, and, on every night but Saturday, free loukmades (cinnamon and honey doughnuts) to sweeten the deal.

For hospitality: No restaurant is more homey in Astoria than Gregory's, where the staff are particularly friendly, but the food's no slouch. Grilled octopus with lemon, tender fried whiting, cheese-stuffed peppers kissed with char, and creamy, herb-loaded zucchini fritters are all worth an order.

For meaty: Kopiaste Taverna is Cypriot, not Greek, and the kitchen has a way with Cypriot specialties like sheftalia, minced pork wrapped in caul fat and grilled, and lountza, pork tenderloin marinated in red wine. The key is to order the $22, 17-course tasting menu that starts with good salads and dips and finishes up with mountains of pork.

For fancy: MP Taverna is the offspring of Michael Psilakis, who's best known for his cheffy-casual Upper West Side Greek restaurants. This may be his most exciting, though: a menu that's easy to love and full of big flavors, rich with acid and spice. Get the cheese dumplings in a boisterous sauce of tomato, lamb sausage, and spinach, or the sticky-rich braised lamb shank with tender orzo and a touch of orange zest, or a bulgar salad that's actually awesome, full of fennel, lemon, dried fruit, and crunchy almonds.

Then stick around the neighborhood for a while, perhaps with a shot of ouzo. Astorians don't go to bed early. 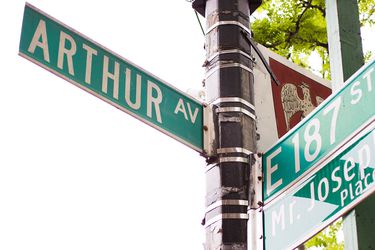 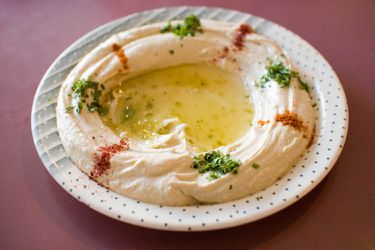