We tasted nine store-bought queso dips to find the very best ones.

There’s something magical—and downright incredible—about inviting over a huge group of friends for dinner or a party, and then cooking every single dish yourself. “What, this old thing?” you casually say as you place a platter piled with homemade terrines, pork rillettes, and plenty of homemade bread on the table. But as great as it can feel to do all the cooking before a big party, it can be equally nice to do almost no preparation at all. When it comes to game day, we’re team Minimal Stress. So if you don't find it relaxing to make an entire spread from scratch, to make your game day entertaining easier, we decided to find the best store-bought version of the most iconic game day snack: queso dip.

This impossibly orange cheese dip is to thank for making you feel better when your team loses, and keeps you going when they win and you’ve maybe—just maybe—had one too many beers. Though queso dip has a long and interesting history, it's really quite a simple food. Cheese and milk are melted together into a gooey, stringy mixture that clings perfectly to chips, sandwiches, and pretty much everything else you dunk into it. Though some of the plainer queso dips contain little more than cheese and milk, others, originating along the border and sold as chile con queso or salsa con queso, also incorporate finely chopped tomatoes, onions, and peppers. There are a lot of queso dips out there, but it’s worth doing a little bit of research before grabbing a jar at random to serve alongside chips and quesadillas. Not all queso dips are created equal.

How We Chose and Tested the Queso Dips

A queso dip should be smooth, velvety, and creamy, with a hint of heat and sweetness if there are chopped peppers and tomatoes included in the jar. If there are small chunks of pepper and tomato in the mixture, they should pop and crunch between the teeth, not dissolve into mush. The cheese itself can’t be grainy or oily (though many of these products do contain oils), and should be thin enough to scoop up, but thick enough to coat a chip. But that’s not enough. The cheese also has to look fantastic, since it will—for the duration of game day—take the place of pretty books or sculptures on your coffee table. We were looking for a queso dip that was vibrant, appetizing, and actually looked like it was made with real cheese.

For this test, we settled on nine widely available and very popular brands of queso dip. We eliminated any brands from our initial list that were terribly reviewed by customers online, or appeared difficult to find from one region to the next. Once we’d settled on our list of nine dips, we ordered the medium-spiced version for all that provided that option. We hoped a dip with “medium” spice would present the flavor of chili peppers and bring a little bit of heat to the mixture, without making us break into a sweat.

To set up the taste test, I first emptied each container of queso into a plastic pint container, so that no labels or branding would be visible to the queso-eaters. I randomly numbered each container, so that I could keep track of which dip was which, without giving the brave tasters any clues. Nearly every jar suggested microwaving the sauce for at least 30 seconds, until it was warmed and slightly loosened up all throughout. I found that 30 seconds wasn’t nearly enough time to bring the queso to a desirable warmness. Instead of following the timing instructions on each package, I microwaved the containers of queso in two batches, using a thermometer to ensure each dip reached approximately 115 degrees Farenheit before serving them to the panel of tasters.

Once the nine dips were randomly set out on a table in our test kitchen, I asked tasters to first try each one plain before tasting them with corn chips. Though (hopefully) most of us won’t be eating queso with a spoon on game day, tasting the sauce on its own gave tasters a chance to see how salty each dip was without the added sodium of a (very salty) corn chip. The testers were given scoring sheets, and were asked to score each queso from 1 (terrible) to 10 (great) based on the criteria of flavor, texture, appearance, and overall enjoyment.

To choose our winners, the overall enjoyment scores of each queso dip were averaged. Three dips stood out from the pack. It became clear as I worked through the results that tasters weren’t necessarily looking for a dip with the most “natural” taste. Some even noted excitedly that their favorite queso tasted processed, but in an oddly pleasing way. To get a better sense for what set the winners apart, I asked each taster to include comprehensive notes along with their ratings.

These are the quesos that reign supreme.

After all of the tasting was done and my coworkers had recovered from their queso-induced stupors, I asked them what their impressions were of the various quesos. Many of them admitted that their reference point is, and has always been, Tostitos Salsa Con Queso at Amazon. So it’s no surprise that this nostalgia-inducing jar of cheese came out on top, scoring higher than the two other winners.

Nostalgia aside, tasters approved of this queso’s familiar orange hue and creamy texture. The medium spice level came through, tasters noted, writing that it had “nice heat,” and “the perfect amount of spice.” This queso does contain bits of pepper and tomato, but tasters liked the “minimal pepper bits” that didn’t get in the way of the otherwise creamy texture. With an ingredient list that continues for several lines after listing cheese and milk, it should come as no surprise that this dip has a heavily processed flavor—one tasters actually seemed to like. “Just processed enough,” said one taster, while another noted that it “tastes artificial, but in an almost good way.” One critique that was echoed on most of the tasting sheets was that this queso is a little thin, and dripped off of chips at times when it should have clung.

Ultimately this queso won out for several reasons. In addition to triggering fond memories of game days past, it delivered the right amount of spice, had a lovely orange-yellow color, and, as one surprised taster noted, actually “tastes like dairy.” 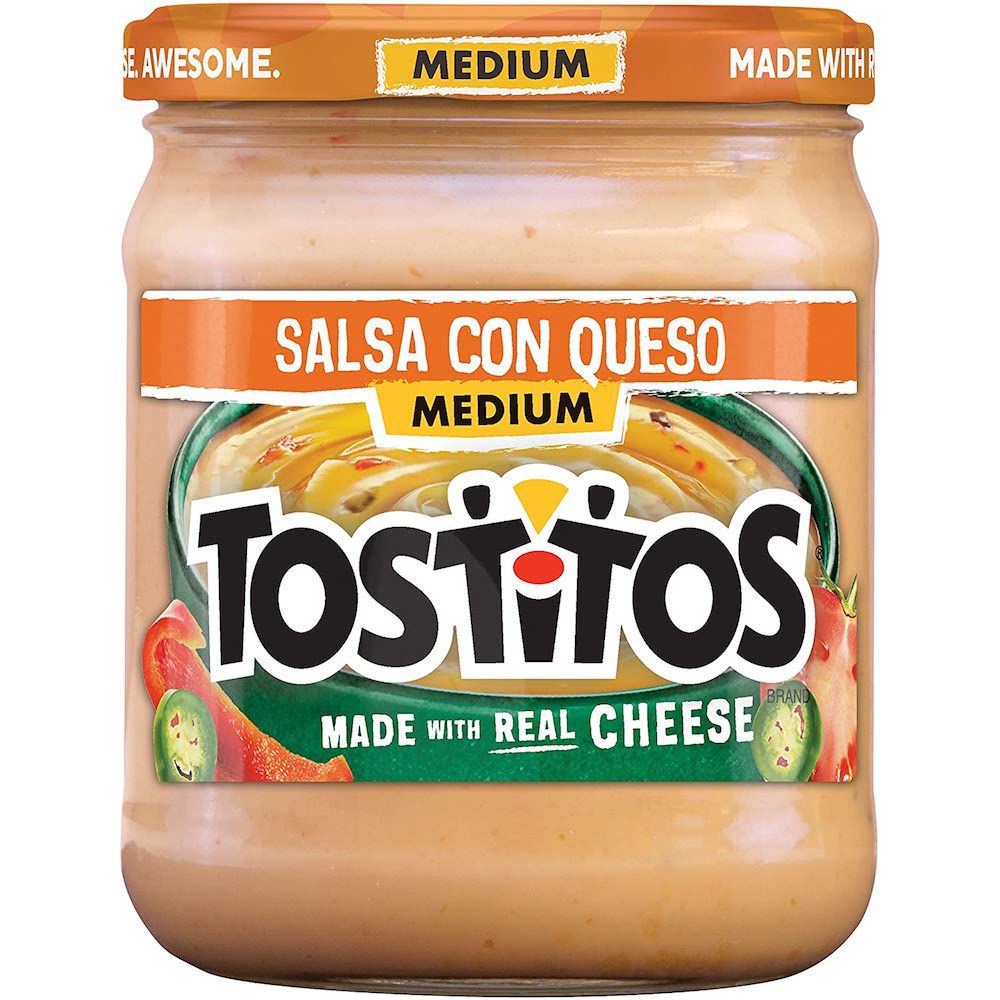 Though it didn’t rank quite as highly as the Tostitos dip, the Casa Mamita Salsa Con Queso at Amazon was still a favorite. More than one person described this dip as “radioactive-yellow,” but in the context of a queso dip taste test, they were pleased with that blindingly appearance. Much like the Tostitos dip, this one boasts bits of chopped pepper, but stops short of giving you chunks large enough to actually chew. Several people noted that they would have liked this dip more if the vegetable bits had been left out altogether.

You’ll get a nice touch of heat from Casa Mamita, and a real cheese flavor, though a few tasters thought the dip was slightly too salty. If you’re looking for a dip that everyone will love, this one will do the trick. 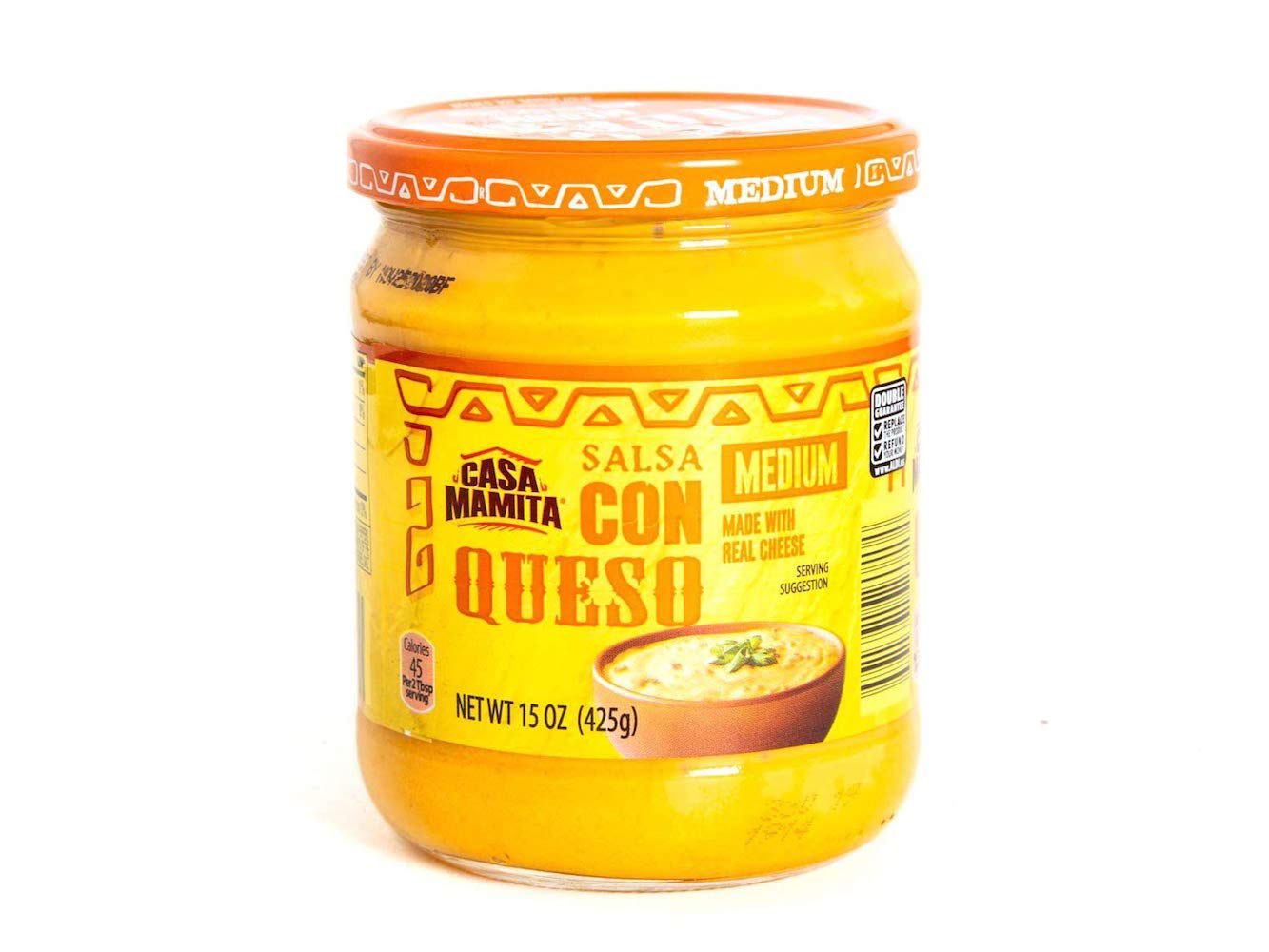 While most of the queso dips we tested looked the same, the Salpica Salsa Con Queso at Amazon stood out. It’s a darker orange-red than the other quesos we tried, thanks to plenty of tomato blended into the mixture. Some tasters were put off by the darker color, but others were pleased with the tomatoey flavor, which they said helped cut through the salty cheese. This queso features smoked jalapeño and cumin, which both give the dip a smoky flavor. One taster noticed that this dip was “different than all the others, because it has more of a spice profile.” While the primary flavor in all the other quesos we tasted came from the cheese, this one gets much of its flavor from tomatoes, spices, and the smoked jalapeño.

You can think of Salpica as a dip for those who might not actually love the concept of a traditional queso dip. Tasters who were looking for the most recognizable queso gave this one low marks, saying that it was “not queso-y enough,” and that they couldn’t “get that hit of cheese flavor.” But for folks not crazy about the intensely cheesy flavor of other dips, Salpica came out on top. If you’re searching for a queso dip that kicks your nostalgia into gear, you might opt for a slightly more traditional jarred option like the ones made by Tostitos and Casa Mamita. But if you’re in the market for a dip that’s smoky, tangy, and pleasantly different, Salpica is a refreshing change of pace. 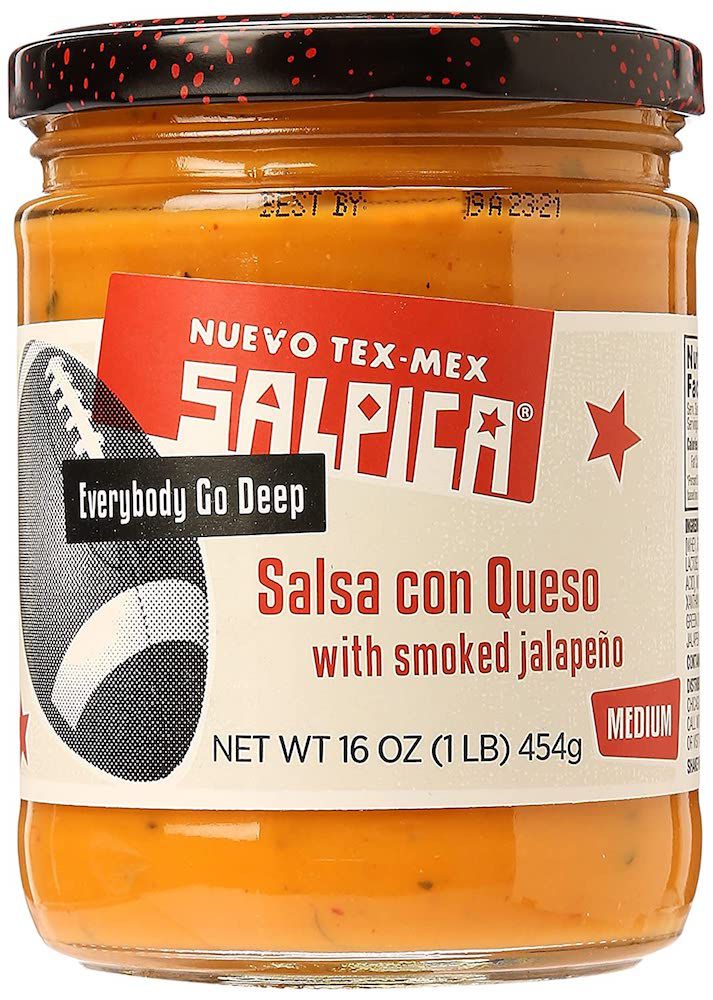 Several times throughout the taste test, I saw my coworkers’ faces shift from the sort of joy you’d expect from people getting paid to eat cheese sauce and chips, to ones of horror, disgust, and anger (at me, presumably). While a good queso is very good, it turns out a bad queso is very, very bad. Tasting notes for the six quesos that didn’t make the cut ranged from "acrid" and "gloopy" to "offensive," "wrong," and "should never see the light of day." Long ingredient lists containing all sorts of preservatives, thickeners, and flavoring agents can produce a jar of cheese that tastes like anything but a simple jar of cheese. That can play to a queso dip’s advantage—as is the case for Tostitos—or can produce something unpleasant that tastes like plastic, which we’d really prefer to leave off of our game day menu.