The weather's cooled off, the holiday season is in full swing, and we're hungry for something warm. Something a little flaky and buttery and tender and sweet. Yes, we're hungry for pie, of the good ol' American variety.

With so many great options out there, we asked our contributors for their favorite picks around the country. They hit up bakeries and restaurants, dug into slices, and took on whole, double-crust pies to find the very best in town; from classics like apple and pecan to fudgy, buttermilky originals, here's what they had to say.

Hidden on the backside of a dry cleaners' with no actual streetfront, Pie Shop is so worth the hunt. Owner Mims Bledsoe cranks out consistently spectacular pies in both savory and sweet varieties, but the one I fantasize about is her Chocolate Ganache. Callebaut Belgian dark chocolate (56% cocoa solids) is melted down in a double boiler and made into a mousse with the addition of cream, butter, and sugar. Nothing crazy—simplicity is the key for Mims—but once it's placed in her classic all-butter crust (just a hint of sweetness) and topped with fresh whipped cream and more grated dark chocolate, the rich resulting decadence is anything but simple. In nearly four years of business, she's taken it off the menu for only one week...and people lost their minds. —Todd Brock

There's no shortage of pie in Austin—in fact it just might be the city's favorite dessert. And although Austin's food scene is expanding and earning a reputation for creative cuisine, the pies, like much of the barbecue, remain quite traditional. When it comes to classics, pecan pie is my go-to, and you'll find the very best one at the Frisco Shop. Their take separates into layers: the bottom remains custardy and just slightly undercooked, while the caramelized pecans form a crispy top. It's the perfect end to any meal or as an afternoon pick-me-up with a cup of coffee. —Meredith Bethune

There area few pie spots we Chicago food nerds visit over and over again, like Hoosier Mama Pie Company and Bang Bang Pie Shop, but the South Side deserves some pie lovin' too. And that's where Jimmy Jamm's Sweet Potato Pies comes in. Their Original Sweet Potato Pie slice is the one to get: It features the roasted, caramelized flavor of sweet potatoes without being cloyingly sweet or overly adorned with spice, in a crumbly graham cracker-like crust that practically dissolves in your mouth. Drive to Beverly. Now. Before I buy all of the pies. —Dennis Lee

Los Angeles' go-to pie surprisingly comes from a cocktail bar masquerading as a red sauce Italian joint. Jones, the two-decade-old restaurant owned by Sean MacPherson, is more than just a late-night haunt for industry folks; it's home to the city's best slice of apple pie. Served sizzling on a cast iron skillet that's slicked with a bubbling layer of molten caramel, each hulking slice just barely contains the rich apple slices inside. The crust is predictably flaky, with a warm, buttery interior, but it's the triple scoop of vanilla ice cream on the side that seals the deal. Part caramel apple, part fresh-from-the-oven pie; Jones' dessert is a must-have for anyone with a sweet tooth. —Farley Elliot

All of the pies from Nate Winner, a.k.a. The NOLA Pie Guy, are blue ribbon-worthy; his smooth, custardy key lime, with its exceptionally toasty graham cracker crust is a solid contender. But his Chocolate Pecan Pie takes the cake. First of all, he starts with a beautifully flaky and delicate crust made with room temperature butter—much easier to work with in the New Orleans heat. He sources local Louisiana raw sugar and pecans from Three Brothers Farm and Inglewood Farm, respectively (he even uses Old New Orleans Rum in his rum-pecan pie). And while usually consumption of pecan pie is self-regulating—its cloying sweetness makes eating too much difficult—this just isn't the case with Winner's pie. The bitterness of dark chocolate and molasses mitigate any syrupy sweetness while upping the gooey factor in a problematically delicious way. The result is sticky, fudgy, pecan pie perfection. —Maggie Mariolis

Having been hot on New York's pie trail for more than 40 years now, I can honestly say that there's never been a better time to eat pie in Gotham. That said, when my pie pangs are impossible to quell, I have to have a slice of Yura's apple pie. The combination of the buttery, flaky, just-salty-enough crust and the cooked, almost caramelized (but not too sweet) apples is a recipe for pie nirvana. —Ed Levine

Holly Ricciardi's signature pie won't get you drunk, but the booze-infused staple of her menu at Magpie encourages other kinds of elation. Originating with her great-grandmother—the recipe is framed on the wall—her chilled butterscotch bourbon pie starts with a rich, thick custard infused with noticeable amounts of Jim Beam. A spongy caramelized layer forms on the top during baking, making for sweet forkfuls with all types of texture. —Drew Lazor

Standing at least three inches tall, Great Maple's apple pie is quite the looker. The flaky crust is stuffed with big chunks of warm, tender, cinnamon-sprinkled apples. But it's the accoutrements, like buttery caramel sauce, spiced candied pecans, and whipped cream, that take it over the top. You can order it three ways: naked, à la mode (which will net you a mammoth scoop of vanilla ice cream), or topped with melted cheddar. —Erin Jackson

Stuffed with Granny Smith and other local apples—a mix of peel-on and peel-off chunks—Tartine Bakery's pie lets the fruit shine. There's the barest touch of cinnamon and lemon in the filling, and a thin layer of fragrant frangipane underneath, but the results are subtle and delicate, wrapped in wispy-flaky pastry crust (the same one they use for their stellar quiche.) As a whole, it's a wonderfully bright and fresh-tasting rendition of the classic, not weighed down with too much sugar or spice. Order ahead to reserve one for Thanksgiving. —Maggie Hoffman

The butterscotch bourbon pie is the charmer of the pie world: not quite able to get by on its scrappy, cookie-crust-edged looks, it must woo with its dense, sweet butterscotch pudding, tinged with vanilla and bourbon. And would you like some pie beneath your whipped cream? Visually, it's a bit disturbing to see the top-heavy cloud of white (dotted with pecans) towering over the creamy butterscotch pudding, but texturally, it makes perfect sense. Eaten together, along with the thin layer of vanilla wafer and toasted pecan crust, the entire pie completely balances out. It sure ain't the prettiest pie at the party, but it's definitely the best-tasting. —Naomi Tomky

If you're in the mood for something a little less conventional, head over to Dangerously Delicious Pies in the Atlas District on H Street. Their expansive rotating menu of eclectic flavors are available by the slice or whole. The overwhelming favorite is the Baltimore Bomb: Densely packed with vanilla, buttermilk, shortbread, fudge, and Berger Cookies, it's a shotgun blast of custardy flavor to the mouth. —Brian Oh 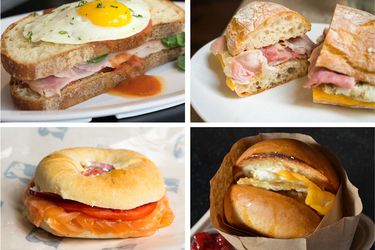 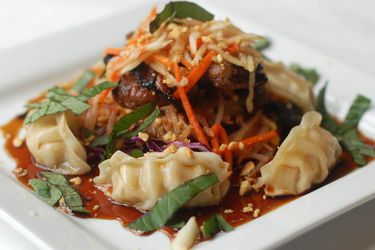