I love pecan pie. For about one bite. It's just a little too sweet and rich for me to finish a whole slice. And I love apple pie, but let's be honest, you can talk yourself into eating apple pie for breakfast and not feel too guilty about it—I mean, it's got to be at least two servings of fruit, right?

But what if they got together, and the super-sweet indulgence of the pecan pie gussied up that wholesome apple pie just a little bit? It might just be a dessert match made in heaven.

There's a hidden bonus here, too. Since you're topping your pie off with a delicious pecan-caramel lid instead of a piece of pastry, you can cook all three elements of the pie separately and get them just right, then assemble them afterward. It's (almost) foolproof, and actually takes a little less time.

Let's start with the pie crust. Anytime I can blind-bake my pie crust, as with custard-type pies like pumpkin pie, key lime pie, shaker lemon pie, etc., I do it. 'Blind baking' is just baker jargon for baking the crust naked, with no filling. One of the most insidious pitfalls of pie is the dreaded soggy bottom, and it's really hard to avoid when you are dumping lots of juicy fruit into a raw pastry shell and then baking them together. Inevitably the juices run before they gel, which risks soaking the pastry before it can bake up all nice and crispy.

Here are a couple of key blind-baking points:

The apple filling is really the soul of this pie. Use baking apples, such as Braeburns, Jonathans (which I used here), Golden Delicious, or Jonagolds (the love child of Jonthans and Golden Delicious). The important thing is that they are crisp and tart: apples that are tart and have a fresh snap tend to have more acidity and more pectin, which means that they'll hold together better in a pie filling and taste more apple-y when mixed with sugar and spices.

Most apple pie recipes call for peeled apples. I can't bring myself to do it. The peel has lots of pectin and flavor, and once it's baked it becomes soft enough to be harmless in the filling. But I acknowledge that it does add a texture not everyone loves. I usually split the difference and partially peel my apples, dragging the peeler in a spiral around the apple from the stem to the blossom end, leaving a stripe of peel behind as I go. That way, when you slice the apples, you get striped pieces with little bits of peel, not enough to be a bother. Plus, the extra pectin helps along the texture of the pie.

I also like to use beurre manié to thicken up my filling. Wait! Come back! Don't quit reading just because it's French. It's my favorite way to get the apple juice that bleeds out during the bake to turn into a gooey filling instead of a drippy soup. Beurre manié literally means "massaged butter," but is technically a mixture of butter and flour.

To make it, you just take equal parts cold butter and flour by volume (i.e. one tablespoon of butter and one tablespoon of flour) and rub them together until you have a paste. That's it. You've just made beurre manie. It operates on the same principal as a roux: as it cooks, it thickens and holds together whatever you've added it to, while adding the wonderful flavor of butter to whatever you're cooking. You can use it for thickening pan sauces, gravies, soups, chowders, stews, scampi, pie—the possibilities are staggering.

There are other recipes on the internet for some variation of caramel apple pie, but by and large they call for store-bought caramel sauce. You could, if you wanted, just grab a jar of caramel sauce, pour it over your pie, and call it a day. I really wanted a caramel topping with some teeth to it, though. And I wanted bourbon (always). Caramel is actually really easy to make. The only thing you really need to guarantee success is a candy/frying thermometer. Paying attention to the temperature is critical: the difference between 256 degrees and 266°F is the difference between a sliceable, soft caramel topping and a serious hazard to your fillings. Once you have the thermometer, you just clip it to a pot, dump in all of the ingredients for the caramel, and heat it to the recipe's designated temperature. That's it. Done.

So there you have it, those are the components. To make the pie, it's as simple as cooking the apples on the stovetop while the crust is blind baking—that only takes about 20 minutes.

While the crust and apples are cooling, you can whip up the bourbon-caramel, which is done in about seven minutes. Then you just put the apples in the crust, fold the pecans into the caramel, and spoon it all on top of the apples. 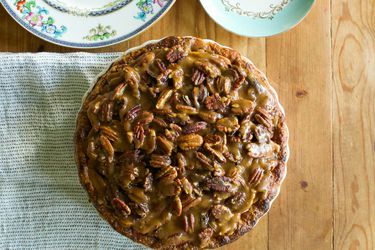 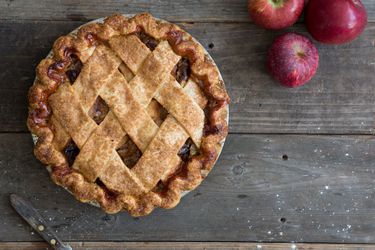 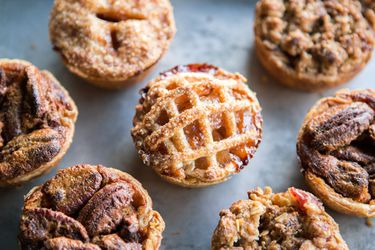 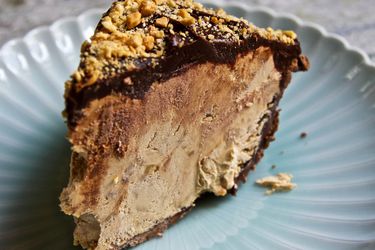 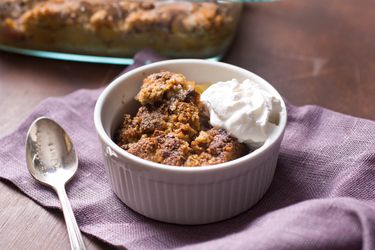 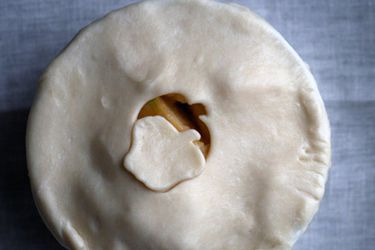