Korean cuisine is only getting bigger in America, and LA is one of its headquarters. The city's sprawling Koreatown has everything from braised short rib stews and crackling rice cooked in stone bowls to 4 a.m. platters of fatty barbecue after all-night karaoke, and it all rarely disappoints.

But all those options can get a little dizzying, especially when dozens of restaurants often compete to make the same dish. But there's always a winner in battles like this, and the difference tends to come down to quality. The trick to navigating Koreatown? Know that no one restaurant does everything well. Stick to these specialties, though, and you'll be plenty well fed.

The best Korean barbecue is all about marbled beef, fatty pork, sweet-salty marinades, blistering heat, and a good jolt of smoke. (Plus soju and tall bottles of Hite, of course.) Koreatown has older well-respected restaurants, rowdy late-night joints, and local haunts, but Kang Hodong Baekjeong stands above them all, thanks to their high-end, well marbled meat selection.

Here, inch-thick cuts of especially porky pork belly rule the flame, dripping melting fat and a slightly spicy marinade onto the grill below. Smoke bellows around thin, wide flaps of buttery short ribs that get pulled right when they're tender on the inside and charred at the edges. It's all usually handled by one of the keen-eyed waiters that walk the noisy room, waiting for just the right moment to move meat from the flame to the plate. But the most indulgent meat in an already all-out meal, is the ribeye. Wonderfully marbled and disastrously thick if left in the hands of a Korean barbecue novice, at Baekjeong the steak gets a serious crust from high heat and is then left to rest before slicing, which helps the juices from running all over your plate and keeps the flesh from overcooking. By the time Gangnam Style loops back around on the sound system (it won't be long) you'll be ready for another.

A hearty Korean staple, seolleongtang is a pale white brothy soup made from simmering ox bones for a long, long time over low heat, often for the better part of the day. It's good rainy day food and great hangover food, designed to be customized by the diner with tableside condiments of salt, pepper, MSG, green onion and cuts of offal.

Like some of the best Koreatown spots, Han Bat is perpetually busy, a little hidden away, and cash only. Murky white soup hits the tables in heavy black bowls, alongside tubs of sliced green onions, some requisite kimchi, and small tins of cooked rice to be added directly to the soup. At Han Bat, glass noodles join the bowl, and it's all about the meeting of those noodles, the broth, and the green onions.

The broth is slightly thicker than what you'll find at some other seolleongtang slingers, with plenty of umami from its long bone simmer, while the glass noodles are as simply satisfying as the bouncy noodles in chicken noodle soup. The real coup comes from the tub of sliced green onions meant to be mixed in, which—when added in heaping doses, as you should be doing—cut through some of the mouth-coating richness and clear the sinuses. Not bad for a sub-$10 bowl that might even include a few cursory slices of brisket.

Galbijjim is homestyle Korean stew at its finest: fatty chunks of bone-on short rib braised until tender and meant to be eaten right off the bone. It's so good it doesn't need accompaniments or dipping sauces, though some rice helps fill out the broth.

As proof of the dish's popularity, Seongbukdong opens at 9 a.m. and doesn't lock the door until midnight, working through pounds and pounds of short ribs every day. At around $30 an order, the dish is far from cheap here, but frankly the place could charge whatever they wanted; Seongbukdong's galbijjim is a local treasure. (And short ribs don't come as cheap as they used to!)

Part of the dish's charm comes from its presentation. Staff emerge from the kitchen carrying enameled white bowls brimming with short rib, each piece pulling back slightly from its bone after a long braise. In a flash, those staff blitz through the bowl with kitchen shears and tongs, slicing the rib meat away from the bone and returning the meat to the broth. Dashed with sesame seeds and a little green onion, Seongbukdong's galbijjim is simultaneously rich and clean, approachable in its simplicity but far from mild. If you're looking for a stew with more funk, head down the menu to godeungeo jorim, a dish of slowly braised mackerel that's cut into slightly spicy chunks, bone and all.

Korean fried chicken is possibly the best version of the bird, with shatteringly thin, spicy sweet crusts encasing tender meat. Which is what makes KyoChon, the South Korean chain with over 1,000 locations internationally, such a hit.

Yes, there are worthy Koreatown contenders to the fried chicken throne, like OB Bear and Dan Sung Ha, but KyoChon's consistency and sauces trump them all. The chicken, served hot, fast, fresh, and amazingly crispy, comes whole, by the wing or drumstick, or as a combo special for the quick lunch crowd. And by flash-frying the pieces, the kitchen doesn't give the chicken time to sit, keeping the crust nice and crisp. KyoChon is an example of large chains focusing on one simple dish, and getting it really, really right.

As for sauces, the brushed soy glaze is the most popular variation, though spicier options abound. An umami-rich savory-sweet choice is the honey glaze, which has its own sticky satisfaction.

At the edges of Koreatown along Olympic Boulevard, bibimbap lovers look for Jeon Ju, a simple strip mall spot that specializes in the sizzling stone bowl of rice, chopped vegetables and meat, and runny egg yolks to bind it all together.

Topping choices vary, but most tables opt for the ubiquitous kalbi bibimbap, which arrives mid-sizzle inside a thick clay bowl heated to solar-surface temperatures to char that rice. The bright, fresh carrot slices, marinated mung bean sprouts, and pickles certainly each have their place here, but any time salty, crisp bites of kalbi (marinated short rib) come into play alongside a delicate fried egg, the veggies are going to play second fiddle.

The real binder to the whole dish is the exquisitely crisped rice that pulls away from the bowl—the holy grail of any bibimbap cook. Flavor it with that egg yolk and a scoop of gochujang to add some heat.

Koreatown's seafood spots tend to shine with one or two dishes, like seafood pancakes or slurpy noodle bowls topped with fish. Seafood-focused restaurants are as legendary as they are varied, with fish marinated, braised, boiled, served in soups, or used to top bibimbap.

For a well-executed primer on the Korean seafood experience, head to Soban, one of the city's longtime heroes in the genre. Starter bowls of banchan come fast and furious, and are refilled throughout the meal. Toasty-at-the-edges pancakes (haemul pajeon) filled with fresh, sweet seafood like squid set the stage to follow, while complex mains like marinated raw crab and braised mackerel shine on their own as clean, fresh reminders of what quality seafood should taste like. Messy kimchi-spiked plates of braised codfish make a nice addition to the table as well, but with so many banchan bowls laying around, it can be hard to find the room. Not that you should mind.

LA's prodigal Koreatown son is deserving of his own category; there's no denying the enormous influence Choi has left on the Korean food landscape in town. There's Kogi, of course, and the sambal-laced Chego bowls down in Chinatown. But it's Choi's most recent venture, Pot, at the newly renovated Line Hotel in Koreatown, that seems closest to the chef's own return to Korean family cooking.

Choi's hot pot-focused restaurant is as daring as any of his previous efforts, skirting straightlaced "authentic" recipes for full-flavored, true-to-spirit ones.

It's a restaurant where you can get a send-up bowl of budae jjigae full of Spam chunks and spicy sausage alongside lobes of sea urchin perched on sizzling rice. There's a playful hot pot called "inside story" loaded with blood and intestines, and a take on the tartare yook hwe bolstered with pine nuts and rice chips.

Korean beers like Hite are popular with the bar crowds and karaoke-goers, of course, but for many K-Towners, the drink of choice is higher-proof, less-filling soju. The clear rice-distilled drink isn't as heavy as beer and usually leads to a nice buzz all night long.

It's the go-to beverage at Dwit Gol Mok, known to most as DGM, a late-night spot that still operates somewhat under the radar. As Koreatown continues to change, so too does the clientele inside the graffitied space, though everyone at the dark wooden tables agrees on one thing: soju, and lots of it. K-Pop blares from the speakers and the clean, clear South Korean drink flows freely from battered copper pots right up to (and, dare we say, after) the 2 a.m. Saturday night closing time.

Like its higher proof cousin vodka, soju takes well to adulteration, and DGM offers flavors and add-ins like pomegranate juice and—yes—yogurt. And to eat? Simple late night dishes like corn smothered with cheese and spicy pork really elevate the soju experience. Spicy, cheesy, meaty, salty, these sharable dishes are meant to be ordered in installments all night. The snacks keep the crowd going without distracting from the main libation. 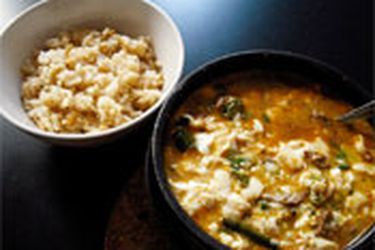