Anne Becerra
Anne Becerra was the first female Certified Cicerone in New York City and worked at the helm of the top craft beer bars in Manhattan before becoming the beverage director at Treadwell Park.
Learn about Serious Eats' Editorial Process

Imperial IPAs, Imperial Stouts, Imperial lagers, pumpkin ales, and sours: if you go into any beer-focused bar or bottle shop, 'Imperial' is one word that you'll certainly see a lot. Craft brewers over the past decade or two have been known to say "the bigger the better," and "go hard or go home," and brew their amped-up beers accordingly, but in fact, the 'Imperialization' of beer—that is, bumping up the alcohol and flavor in all sorts of beer styles—is not a new thing at all.

Let's dig into the history a bit.

If you were drinking beer in early 18th century England, you probably had porter in your glass. These roasty brews were extremely popular in pubs across the country, and when the Russian tsar Peter the Great visited, he became a fan. The tsar requested a shipment of this dark, toasty beer to be sent to the Russian imperial court.

Sadly, the porter wasn't built to last the thousand-plus mile long sea voyage. The changes in temperature and long time periods affected the beer the tsar had ordered and it inevitably spoiled along the way. In an attempt to make up for that embarrassment, The Barclay brewery of London stepped in and hacked the recipe a bit to make the beer more suitable for travel. They amped up the alcohol and hop content for increased preservative power, subsequently creating a new style of dark beer that was richer, stronger, and much more intense.

Not only did this stronger beer survive the journey—but drinkers also found that it could age for years without spoiling. Catherine the Great became such a fan of the style that she famously ordered large quantities from various English breweries for consumption in the court. The style became known as Russian Imperial Stout, the same name it has today.

Head across the world and time-travel to the early 1980s, and you'll find the 'craft beer revolution' on the rise. The driver: flavorful hoppy brews coming from the West Coast. When Sierra Nevada Pale Ale hit the scene, it offered big pops of piney, citrusy flavors—it was a beer unlike anything else on the market. Soon, beer lovers wanted more. By the early 1990s, brewers got hooked on taking traditional beer styles and cranking them up, packing more hops and more alcohol into what started as the relatively mellow pale ale and eventually other styles, too. The use of the word "Imperial" to denote a higher-alcohol, fuller flavored version of a beer was initially borrowed from stout, but has since been applied to pretty much any style you can name. Imperial pumpkin ales, saisons, pilsners: anything is fair game. Sometimes you'll see terms like "double" or "extra" that fit this category as well: today, you can find high-octane beers to suit pretty much every flavor preference.

But bigger isn't always better: some Imperial beers can be completely dominated by one facet of its flavor, ending up sticky-sweet, far too bitter, overly boozy, or brash just for the sake of being brash. We like a little balance.

Which Imperial beers are worth a try? This list includes 9 favorite big beers that are bold in flavor but still manage to be balanced, with each element blending together seamlessly. Each stands out for impressive complexity and food compatibility. As the weather chills, and what you eat becomes more indulgent, so can what you drink. These beers can bring out harmonies in food flavors, tame spice, cut through richness, and cleanse your palate, all matching the intensity of anything on your plate. As you set the table for special occasion meals this fall and winter, put out a glass for sipping these brews. Let the gluttony begin!

This beer offers a unique combination: it's big and full-bodied, yet refreshing and shockingly easy to drink at 9.5% ABV. Give it a sniff: the aroma will wake you up, like fresh squeezed orange juice with hints of star anise. The core is sweet candied malt, cut through with a grapefruit-like blast from Cascade and Centennial hops, amongst others, and wrapped up with a clean, dry finish. Double Jack reminds me of grilled citrus halves: sweet and fresh, tangy and caramelized. The key to this beer's success is balance, and perhaps that's why it works so well with food. Each ingredient contributes to the flavor, without overpowering the rest.

Pair it with: Fried foods that overpower meeker beers are perfect for Double Jack. The intense bitterness will stand up to even the fattiest and richest of dishes. Try chicken-fried steak with mashed potatoes and green beans.

Don't be surprised if this beer makes you nostalgic for raisin bran. The deep dark brown Celebrator's complexity comes to us courtesy of the malt, combining toasty cereal grain flavors with sweet raisin and dark toffee notes. A bock is a lager that's on the strong and full-bodied side—this style known as doppelbock (or "double" bock) takes it even further. The style was originally brewed by Monks for sustenance during Lent, and with the chewy texture, Celebrator really is like a meal in a glass.

Pair it with: Baked glazed ham. The beer's richness and sweetness help the savory qualities of the ham shine, while the caramelized flavors present in the drink and the dish go hand in hand.

Like a chocolate soda, this beer has hints of fudge, chestnut, and red cherries, with a creamy texture, and a cola-like aroma. It's more understated than many other Imperial Stouts, which can be nice when you want a big, warming beer but you also know you're going to drink more than than one. It's a bold-flavored beer that can stand up to rich dishes, but its medium body won't overpower lighter fare, either.

Pair it with: Cheesecake. The roasty chocolate notes and hint of fruitiness feel like an extension of the sweet dessert, while the creaminess of the beer enhances the dessert's luscious texture. And unlike a cup of coffee, this stout offers a bit of carbonation to cut through buttery richness and scrub your palate between bites.

If you were to break open a hop pellet, exposing the potent green, resiny flavors, then drop it in an iced coffee, it would smell a bit like a fresh pour of Dark Penance. In this Imperial Black IPA, piney and citrusy hop flavors take the lead, and molasses, burnt sugar, and chocolate notes follow. The two forms of bitterness present: roasted and espresso-like from the malt, and tannic and mouth-drying from the hops. That bitterness works to create a very crisp finish—a crispness that's necessary to balance the rich malty sweetness of this 8.9% ABV beer.

Pair it with: Juicy prime rib. This beer can take it. The sweet char of the meat gets played up by the beer's roasty qualities, and the hops cut through the meat's richness and add a fresh flavor, just like a dollop of horseradish sauce.

Many pumpkin beers hint at pumpkin pie, or seem to taste like a tea meant to taste like pumpkin pie, but this beer is really the whole kit and kaboodle: fresh crust and rich pumpkin custard. There's a little cinnamon sugar in the flavor, and a puff of fall spices—one sip and you can't help but imagine jumping into a colorful leaf pile. The Great Pumpkin is rich, malt-forward and sweet, but without being too sticky (the dry, clean finish helps).

Pair it with: Shortbread cookies and biscotti. The beer brings out the shortbread's sweetness, and the shortbread tastes like the crust on your drinkable pumpkin pie.

One whiff and you know this beer does not mess around. This imperial brown ale is aged in 10,000 gallon tanks made from a Paraguayan wood called Palo Santo, and the flavor imparted by that wood is the clear star of the show. Pinecone and molasses scents lead into flavors of vanilla bean, damp forest, charred oak, and brown spirits. Tannins from the wood dry your mouth a bit, the way they do when you're drinking a big red wine. At 12% ABV, this sipper has a warming effect that makes it a perfect substitute for a port or after-dinner whiskey.

Pairing advice: Sometimes, a beer pairing works through contrast, like squeezing lemon on a piece of fried fish. But other times, it's about amping up shared flavors in the food and drink. If you're looking for an intense experience, try Palo Santo with a smoky chorizo chili. The spice and overall richness will heighten the beer's flavors and vice versa.

If they made fudgesicles in a special dark chocolate-coffee flavor, they'd taste like Old Rasputin. Hints of brown sugar and chocolate-covered coffee bean mingle with a pop of fresh berries. The body is robust, and this beer is best served not-quite-cold: as it warms up you'll start to taste rich espresso, black pepper, and burnt caramel. While it is an intense beer, the smooth texture helps it match—not overpower—foods, and the big bitter finish does a great job at cutting sweetness.

Pair it with: Caramel apple bread pudding. The roasty bitterness in the beer is a nice contrast to the fruity and sweet toffee flavors of the bread pudding, and the beer has enough body to match the dessert's richness.

This silky beer is like a candy shop in a glass: it tastes like hard caramels, orange slice candies, and red apples, but it isn't a sugar bomb. The long conditioning process this Imperial Oktoberfest goes through cleans up most of the residual sugars in the 10% ABV beer. What's left is a full bodied but polished sipper with all the upfront flavors of a sweeter beer and none of the lingering after effects. The finish is distinctly crisp, and the rich texture makes it an excellent dinner partner.

Pair it with: Fried empanadas filled with spicy chicken (or spiced-up leftover Thanksgiving turkey). This malty beer has an impressive ability to mellow out chili heat, and the clean finish and lively carbonation make it a great match for the crispy shell.

Speedway Stout isn't kidding around. This dark, viscous brew looks like jet fuel and tastes like a blend of Thai iced coffee, bourbon, and tobacco, with hints of dark fruit and spice. It's brewed with coffee from Ryan Bros. roasters in San Diego, and the result smells like dark chocolate liqueur. This is your pairing weapon for bold bites.

Pair it with: A wedge of good blue cheese that rounds off your meal. Forget dessert: all you need is a sip of Speedway Stout and some flavorful blue.

Note: All beers except those from Samuel Smith, Firestone Walker, Alesmith, and North Coast were provided as tasting samples for review consideration. 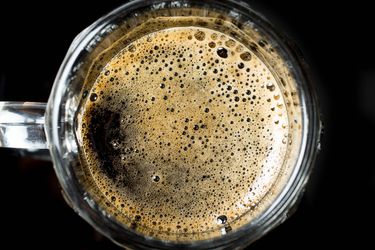