Our favorite hand mixer is the Breville Handy Mix Scraper Hand Mixer, which is powerful and easy to use and even has a built-in timer. We also liked the KitchenAid 9-Speed Digital Hand Mixer. It's more affordable and still performs pretty well.

We rarely recommend hand mixers at Serious Eats. Stella Parks says it best: "There's nothing hand mixers can do specifically that a stand mixer can't."

But stand mixers are expensive, an investment that not all home cooks can make, even if they want to. Hand mixers, on the other hand, are mostly affordable; they're also useful for simple tasks like whipping cream or egg whites and mixing cake batter. Plus, they’re lighter weight and easier to store.

We tested seven different hand mixers and compared their performance to a stand mixer's to find the very best. 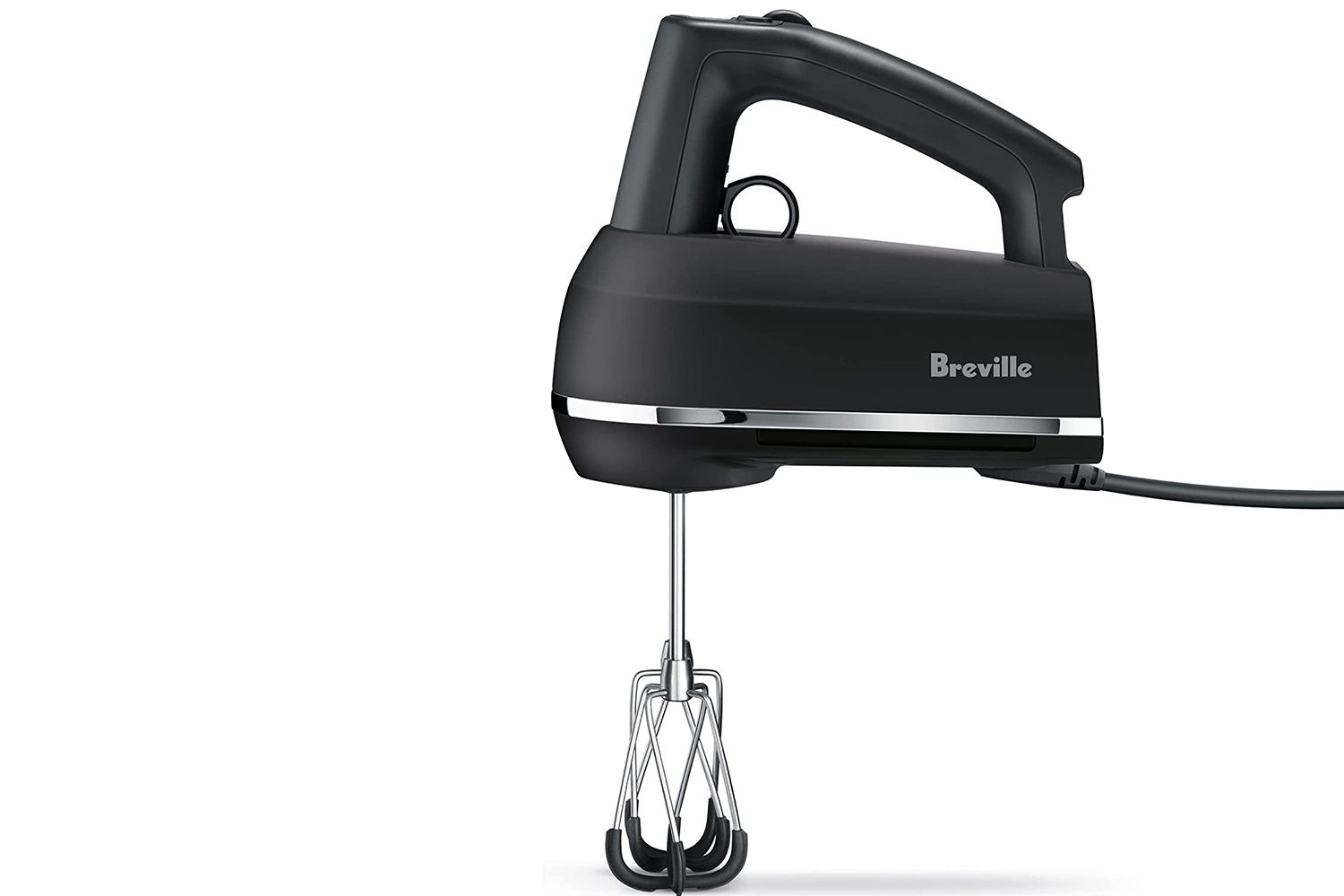 When it comes to hand mixers, you get what you pay for. The Breville was the most expensive of the lot, and with that price came a sturdy machine, sturdy accessories, and good performance. 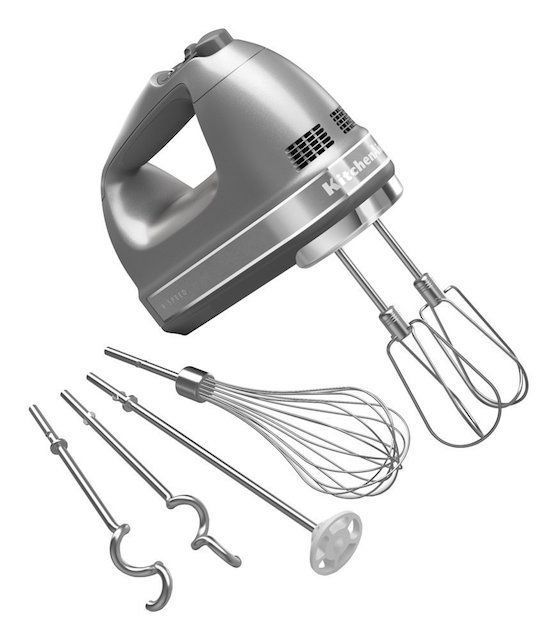 There’s a lot about this mixer to like. With its single large whisk it was marginally faster than our top pick at whipping cream, and did a decent job creaming butter and sugar.

The Criteria: What We Look for in a Good Hand Mixer

Even though she doesn’t like hand mixers in general, she does admit they have their uses, “I don't see hand mixers and stand mixers performing the same task, philosophically. Hand mixers, to me, are convenience devices that make the work we might traditionally do by hand a bit easier, like whipping a French meringue, making mayo, or whipping cream.”

To determine which machines we wanted to test, we looked at brands we already know and trust, while taking into account testing and reviews from other reputable publications.

Tests were performed using precise measurements in a controlled environment. Everything was measured, evaluated, tested, and examined without any bias toward brands or models.

In this test, I mixed a cup of cream with a tablespoon of granulated sugar and whipped the mixture to soft, medium, and stiff peaks. I checked the cream to see if the sugar was entirely incorporated or if the mixture was gritty. The best models whipped cream to soft peaks in one minute 20 seconds or less, while one of the lower performing models took nearly three minutes.

This test offered multiple scenarios where a mixer could succeed or fail (spectacularly). First, I checked to see if the mixer could cream butter and sugar well. Did it merely mix or did it aerate the ingredients to produce a light and fluffy texture? Then I noted how well the mixer could handle the mixture after adding flour and large chunks of chocolate. Did it slow down or burn out? Finally, I baked the cookies and examined their final texture.

The top models in this test were capable of creaming butter and sugar well (though no hand mixer was able to get the mixture very light and fluffy, as a stand mixer could) and did a good job of mixing big chunks of chocolate into the dough. However, only our top pick from Breville was able to thoroughly scrape down the sides of the bowl, incorporating all of the ingredients, thanks to its rubber-bottomed beaters.

The final challenge was making Swiss meringue, testing the mixers’ ability to whip the egg whites to stiff peaks. Spoiler alert: None of them succeeded. I looked up troubleshooting instructions online, and I was still unable to get anything beyond soft peaks.

Some of the mixers achieved soft peaks after about five minutes, but then the progress stopped and the volume and texture began to decline. After each failure, I transferred the mixture to the stand mixture to verify that it was the mixer and not the mixture. The stand mixer had no problem getting each mixture to stiff peaks.

I assessed each hand mixer for how easy and comfortable it was to use while also taking into consideration whether they were easy to store. Our top two picks outperformed all their competitors, especially the Braun and Black and Decker mixers, which both produced loud, irritating sounds while operating.

What we liked: If you compare the charts above, you'll see that the Breville blew away most of the competition, whipping cream and creaming butter and sugar with ease. Along with great power, the mixer has a few other features that make it stand out from the crowd. First, it has a light that shines into the mixing bowl. While my kitchen is well lit, the focused light is nice. Second, and probably my favorite feature, is the pause button. It let me stop the mixer to check progress, and then it restarted at the same speed, but with a soft start. Third, it has a timer, so I could see how much time had elapsed. Fourth, it comes with a case for easily storing its attachments. Finally, the mixer has sturdy wires on the beaters with soft scrape bottoms for less noise and better bowl scraping.

What we didn’t like: This was the second-heaviest mixer of the bunch, despite its compact size. When attempting Swiss meringue, this never got further than soft peaks.

What we liked: A solid performer, this KitchenAid model did a great job with whipped cream and a decent job with cookie dough. It comes with a storage pouch instead of a case, which will save a little bit of space. Along with the usual accessories, it came with a frother that worked well to create a frothy hot chocolate. It was also the quietest of the bunch, measuring at just 70-75 decibels.

What we didn’t like: When attempting Swiss meringue, the mixer could only produce a thick goo. While making cookies, it bucked a little when it encountered large chocolate chunks.

In our tests, the KitchenAid 9-speed hand mixer was the quietest mixer.

What's the difference between a hand mixer and a hand blender?

Hand mixers are great for whipping cream, mixing cake batter, and similar tasks, while a hand blender is, well, a blender, but without a base or jar. It’s used for blending soups right in a pot, for blending refried beans, and for making mayonnaise or emulsifying salad dressings. You can read our review of the best hand blenders (also called immersion blenders) here.

What's the difference between a hand mixer and a stand mixer?

A stand mixer is a countertop appliance that’s heavy and powerful. It can knead bread and mix dense cookie dough, and it can also whip egg whites and cream. A hand mixer is small, lightweight, and easier to store. It can do some of the same things as a stand mixer, but won’t hold up to the most heavy duty tasks.

Can I use a whisk instead of a hand mixer?

For certain applications, like whipping whipped cream, a balloon whisk can absolutely be used instead of a hand mixer. For others, like creaming together butter and sugar for cakes or cookies, you really want the power a hand mixer or stand mixer offers.