I wish I could say I'm the kind of well-organized, thrifty person who stocks her freezer with delicious leftovers, homemade chicken stock, and healthy fresh produce. The kind of person who could safely hole up in the post-apocalypse for at least a week or two before having to venture outdoors. But the reality is that my freezer is pretty bare, and when the zombies come, the only thing I'll be eating is a whole lot of frozen dumplings.

But you know what? I'm okay with that (the dumplings, not the zombies). Frozen dumplings can be flavorful, satisfying, and almost indistinguishable from fresh ones, especially when you cook them properly. Then again...they can also suck. You know what I'm talking about—those sad, bland, plastic-skinned, mushy paste-filled specimens that give dumplings a bad name. And whether you're shopping at your local supermarket or headed to an Asian specialty store, deciding which brand to go with can feel like a total crapshoot.

That's why we set out to try as many nationally and regionally available brands of Chinese-style pork dumplings and potstickers as we could get our hands on, tasting each and every one to see which ones are worth your precious freezer space.

All told, we tried nine brands of pork dumplings, sourced from specialty stores in New York City's Chinatown and large chain supermarkets. Whenever possible, we purchased dumplings labeled "pork and chive," though that option wasn't available for every brand. Four of the brands contained pre-cooked fillings of "pork and vegetables," while the remaining five brands were filled with pork and chives, scallions, cabbage, or a combination thereof. To cook the dumplings, we decided that boiling would give us the most neutral playing field for comparing the samples. In all cases, we boiled the dumplings according to their package specifications.

Tasters ranked dumplings on overall flavor, the quality of the dough, and the quality of the filling. First and foremost, we looked for dumplings as close as possible to the well-made fresh ones we enjoy at our favorite Chinese restaurants. That means a lightly chewy and tender (but not mushy!) dough, and a filling with a pronounced pork flavor, meaty texture, and, where applicable, fresh-tasting vegetables. The biggest turn-offs for us were fishy- or off-tasting meat, rubbery or plasticky skins, and gritty or slimy fillings. At the end of the day, we were left with four brands we'd gladly recommend, all of which we'd proudly serve to even the most discerning of dumpling lovers.

It's worth noting that the translated cooking instructions on some of these packages can be especially cryptic (think "let the water be boiled twice again, fill half bowl of water and boiled third time"). We'd recommend sticking with the instructions in our guide to cooking frozen dumplings, which will work with virtually any brand.

Way Fong's frozen pork dumplings were far and away the most popular among our tasters. It all boiled down to the filling: the juicy meatball is tender but springy, nicely seasoned and intensely porky and rich. But while the filling was collectively applauded, several people commented that the skin was a little too doughy and thick. If you prefer translucent, thin-skinned dumplings, these aren't for you. But lovers of hand-made jiaozi will find Way Fong's petite dumplings to be the most similar to what you can get at a great local dumpling shop.

Happy Family proved the happy medium, the kind of crowd-pleasing dumpling that will reliably satisfy all palates. The skins are thin but not translucent, taut but not tough. And the filling has a good, sweet pork flavor with a healthy dose of chive. The addition of cabbage gives them a more rounded flavor, while a splash of soy sauce perks them up. We tried Happy Family's dumplings and their potstickers and were satisfied with both—the potstickers are more elongated, but otherwise they're almost indistinguishable.

Of the four big supermarket brands we tried, Trader Joe's was the only one we'd stock in our home freezers. "The skin was firm and just the right thickness," explained one taster. As for the filling? The ground pork is studded with cabbage, onion, and scallions, with notes of soy sauce, garlic, and ginger. It's a well-balanced dumpling, but decidedly on the sweet side. Some said that sweetness translated to a slightly artificial-tasting flavor, but most weren't bothered by it at all. If you can't find Way Fong or Happy Family, Trader Joe's is a great widely available alternative.

Though we were satisfied, if not blown away by, Wei-Chuan's thin but firm skin, the filling had tasters split. The finely minced pork is heavily seasoned with scallions and sesame oil (the second and third ingredients listed for the filling, respectively). The scallions have a slightly raw edge and the sesame is pronounced—if you like bold strong flavors, these are the dumplings for you. But if you want pork dumplings with a more mild onion bite, consider Happy Family instead. 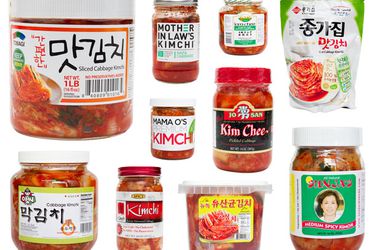