I like chicken wings, because I'm not a vegetarian or an outer spaceling, but I'd never self-served frozen ones before undertaking this taste test. There are a few reasons for this. One is that wing-eating is such a holy mess of an operation, both nutritionally and aesthetically. I can admit to liking wings in theory, but in practice I've been unable to commit to the premeditation needed to have wings waiting in the freezer for the special moments when the spicy, sloppy stars align in such a way that a wing session seems in order.

Another reason is that wings are a festive food, so eating them couch-bound and unaccompanied might seem lonely. I'm not sure why wings are best eaten with accomplices, but I suspect it has something to do with gluttony loving company: If we're all drooling orange stuff, scoffing at celery, and pretending the dipping splooge is both blue and cheese, then none of us has a clean finger to point. If you're doing so alone in public, you're a true hero and don't need any guidance from me. If you're doing so alone at home, then you risk getting dirty looks from your mirrors and demons.

The home-based solution, of course, is to invite friends over* for some frozen wings, and there's no better occasion than the Super Bowl, when sports bars are overflowing and wing delivery places have 3-week waits and 3-digit minimums. Societal conventions aside, there's no reason our nation's leading chicken partitioners and food freezers can't come together to produce a satisfying home wing.

I couldn't field an all-Buffalo lineup, so I bought "hot and spicy" wings from Banquet and Tyson, and Buffalo-style from T.G.I. Friday's grocery division and Perdue; then I fired up the oven, strapped on my orangest sweatpants, and got down to business.

*Or go at it alone after bribing your demons with a couple of sit-ups and a carrot stick.

The chicken was overly tender, almost mushy. The very light wheat-based coating didn't provide any noticeable texture, and the squishiness combined with the mildly spicy ketchup taste to remind me of the flabby barbecue wings at lesser Chinese-American restaurants. And I prepared these in a conventional oven; who knows what kind of a puddle they'd turn to in a microwave. I'll pass on Any'tizers every time.

These were easily the biggest wings in the sample, and a spicy-enough sauce based on cayenne, paprika, and "natural butter type flavor" was properly Buffalonian, though it leaned a little too heavily on the butter. The texture was again a problem, as the breading turned soggy almost as soon as the wings were removed from the oven, which made them seem even fattier than they were--and they were plenty fatty.

A disconcerting grayish-yellow ooze kept threatening to drip off my elbow (I eat wings shirtless) and further discolor my special wing-eating sweats. Purdue does well enough on size and flavor to squeak into the acceptable category, but only if you have a high tolerance for disconcerting ooze.

I struggled with where to rank these, because they turned out to be pretty nice, but they also required more work than the others. These are delivered naked and accompanied by a sauce packet that you need to thaw in water (the instructions forbid microwaving); these are also the only wings in this study to require mid-cook flipping. Neither of these chores is too onerous, but I prefer the other recipes, which require nothing more than popping wings in the oven, twiddling 22 minutes' worth of thumbs, and then popping wings in your mouth.

But the T.G.I. Friday wings, once assembled, did taste better than the Tyson and Perdue models. The wheat starch and rice flour breading still managed to get fairly soggy despite the subtraction of sauce and the addition of flipping, but the vinegar and cayenne sauce was worth the extra step. It was well rounded and also the hottest sauce I tasted, comparing favorably to a thickened Texas Pete's.

These were my favorite by far, but a strident hot wing purist might argue for their disqualification on the grounds that they more closely resemble peppery fried chicken than they do traditional sauce-slathered wings. The Banquet beauties are battered, breaded, and then dusted rather than sauced, which allows the crispy skin to shine. The chicken was moist and firm, and it was interrupted by fewer ligaments (or whatever those dark-brown poultry filaments are) than the other brands. But what was gained in texture was sacrificed in heat, as there was very little spice beyond a healthy dose of black pepper with a light paprika chaser.

These aren't going to remind you of your beloved sports bar wings, but they're plenty good in their own right. Got some hot sauce in the fridge and a tiny smidge of ambition? If so, these are the frozen wings for you. 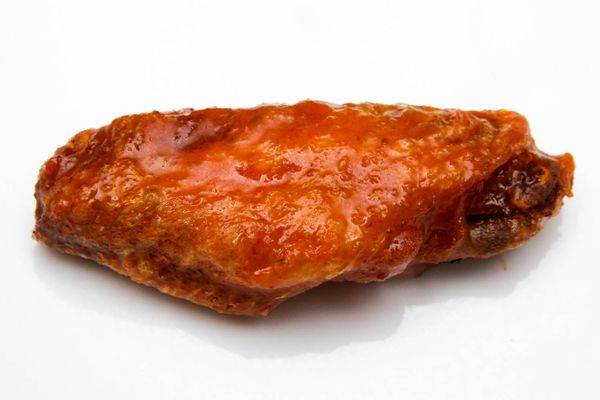 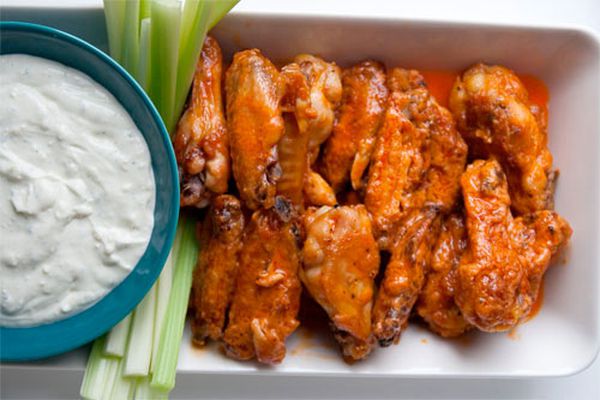 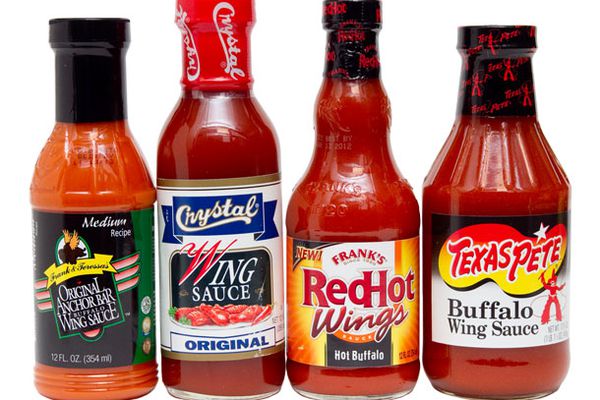 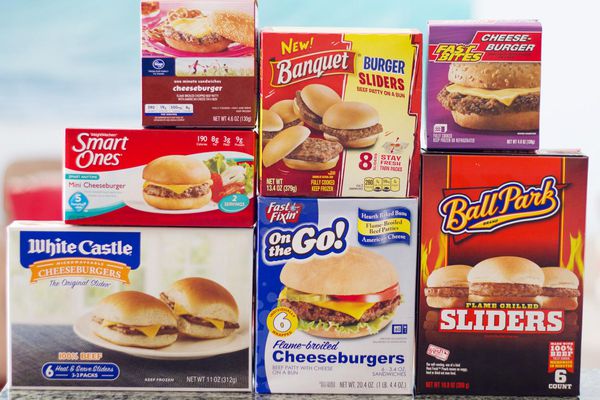 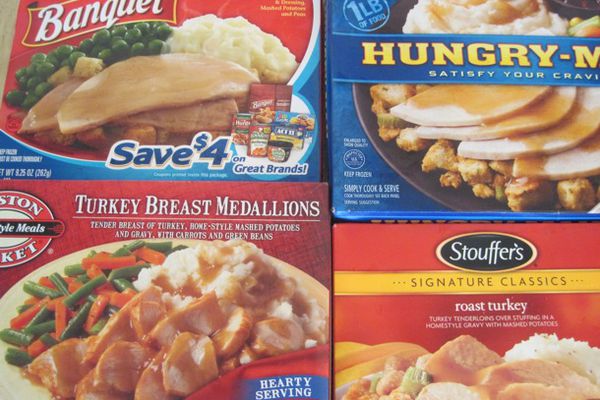 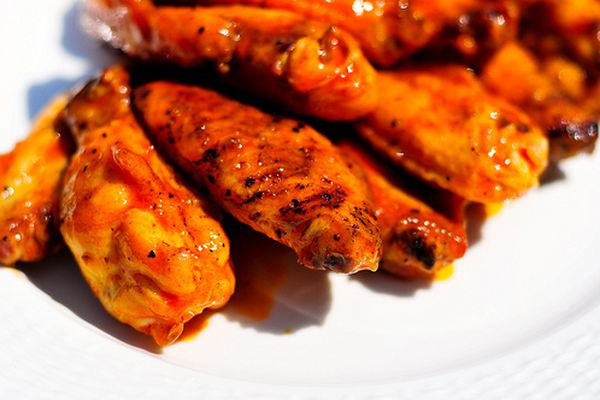 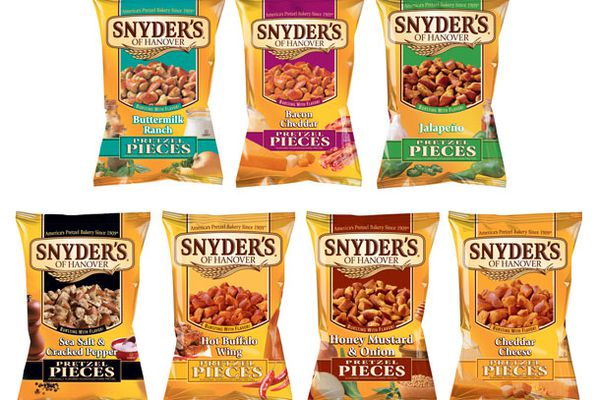 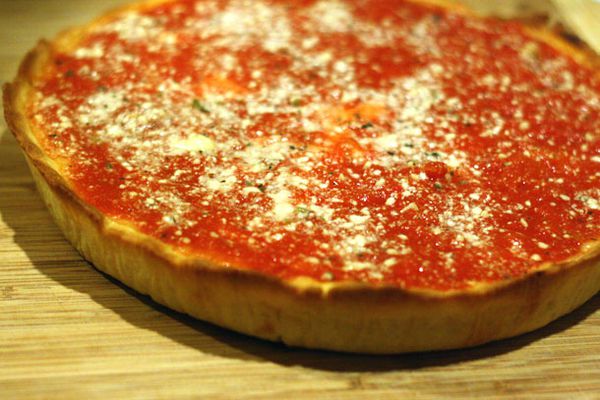 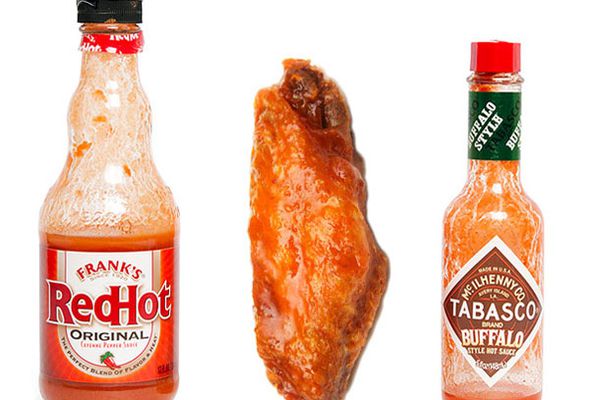