It's good to be Ricky Piña, the fedora'd fish master behind his namesake taco phenomenon. For the better part of a few years, Ricky's Fish Tacos have been serving up Baja-style shrimp and fish taco offerings to anyone willing to make the drive out to Silver Lake.

What started as a solo venture just off Sunset Junction has now become a team operation working out of a haphazard parking lot in that weird space between East Hollywood, Los Feliz, and Silver Lake. Ricky's simple fried creations have transcended the tacosphere.

Not so fast, though. Just up the street, the Los Feliz location of Best Fish Taco in Ensenada has been providing locals with fresh fried fish tacos, battered and splattered right before their very eyes. With a brick and mortar location that includes a sizable patio, Best Fish has gotten their fair share of shine for serving up authentic Baja tacos, crispy and unadorned (until you reach the expansive salsa bar).

So who's really got the goods? Ricky's is arguably the biggest taco talk in town since Kogi BBQ changed the face of fusion in Los Angeles, while the slow and steady Best Fish has been winning over hearts and stomachs for years.

"Despite the press and the Twitter followers, walking up and watching Ricky man the fryers still feels like an adventure."

Ricky's Fish Tacos is one of those blink-and-you'll-miss-it operations. Tucked inside what appears to be a four-car parking lot for an adjacent apartment building, you'll have to look for the tan pop-up tent just to find your way. That's part of the fun with Ricky's, though. Despite the press and the Twitter followers, walking up and watching Ricky man the fryers still feels like an adventure.

Things don't exactly move fast here, considering the small crew and limited workspace. Less than a year ago, there wasn't even someone to man the register, just an open till and Ricky telling you what you owed while maneuvering the next batch of tacos floating in oil. It's still a simple process, with only fish and shrimp tacos routinely available. Occasionally Ricky will throw in some lobster as a treat, but expect to break the $5 per taco barrier for such indulgences.

Orders hit the folding table still sizzling on their griddled tortillas and already topped with a hefty dose of shredded cabbage and a peppered-up pico do gallo that offers a little heat. What condiments there are (a salsa verde, a few rojas of varying heat levels and lukewarm crema) sit at the main table in squeeze bottles with taped-on labels. All of this is superfluous, though, because the fish is outstanding.

Working off an old Piña family recipe, Ricky's batter is crispy at the edges without shattering in your mouth. The plumper bits offer more substance without feeling overly bready or salty, and there's the thin veil of hot pepper heat coming from within the entire mixture. The white fish flakes off smoothly, offering up a large creamy interior just begging for a dab of salsa.

If shrimp is more your style, Ricky's provides the sort of portions you're looking for. Each taco is end-to-end with big, meaty bites that never taste like brine or get too soggy. You'll want to savor each bite, slowly and delicately, because the shrimp tacos are the best of an already wonderful thing. Adding a few squirts of crema helps to cool down any salsa side effects and provide another satisfying textural element.

Should you find yourself in front of Ricky on a day when lobster is available, use your discretion when ordering. If the succulent crustacean is an "any time, any place" sort of thing for you, then you might be pleasantly surprised at competing textures and the sheer size (two tacos long!). For my money, I'd rather double up on the shrimp tacos and leave my lobster in a split-top roll with a douse of butter.

Everything at Ricky's Fish Tacos evokes a Baja taco sensibility. The atmosphere is always fun, the tacos are so fresh you can practically see the fishing line still poking out of the cooler, and the sensational flavors might just leave you seeing ocean waves, instead of asphalt and a few folding chairs.

At BFTIE, they sure do have the beach vibe down pat. Both the patio and the cook station resemble tiki huts, with bamboo poles and thatched roofing. Inside, painted ocean murals and brightly colored tile offer up the sunny mindset, while the slow-talking owner working the register in the Tommy Bahamas shirt seals the deal.

The menu at Best Fish is certainly more expansive, with a specials board that rotates less common selections, including the occasional rolled tacos. And then there's the salsa bar that runs nearly the length of the small interior.

Each offering is largely untraditional, combining tomatoes, cilantro and onions with, say, pineapple or chunks of mango. They're zippy and playful, but discovering the right combination requires a bit of trial-and-error. Even then, fruity salsas or a hefty dose of minced radishes just might not be your thing.

Besides, this place is all about the "best fish," right? Well, not exactly. While still tasty and deeply browned, both the fish and shrimp options suffer from a lack of seasoning before hitting the oil. The batter provides a nice crust and you can still get plenty of satisfying mileage out of warm and crispy shrimp, but it can all be a little bit bland. Hence, the funky salsa.

In terms of value, you certainly get more pure product at Ricky's Fish Tacos, but you'll pay around $.75 cents less at Best Fish Taco in Ensenada, so that's pretty much awash. Everything else favors Ricky's by a pretty wide margin.

There's something in that Piña family batter recipe that works, and works phenomenally well. Each bite, outside in the L.A. sun, can be a moment on the beach if you let it. Golden brown with delightfully crispy edges and warm, satisfying interiors, Ricky's Fish Tacos deserves each and every one of the accolades that have been lobbed their way.

You'd be hard-pressed to find more authentic Baja tacos in Los Angeles, and even then you wouldn't have Ricky himself, standing behind the fryer, smiling until all that sunshine hits the horizon. 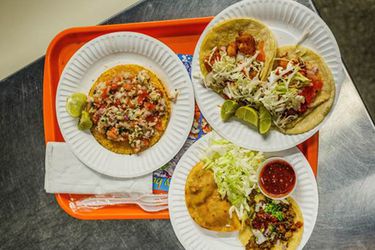 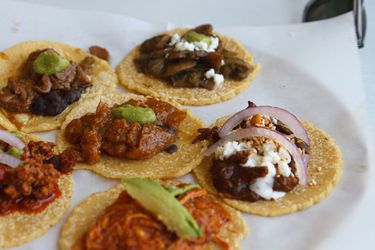 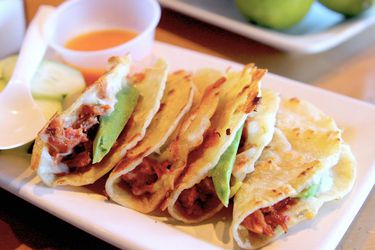 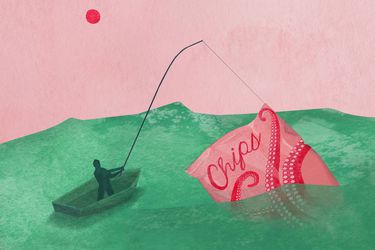