Poor vanilla. Such a smooth and lovely flavor that complements so many things, yet the word itself has become shorthand for "boring, plain, and unexciting." Take vanilla ice cream, for example. Doesn't your heart sink just a little bit when someone offers you cake and ice cream.. and then you find out it's just vanilla? Don't you kind of start looking around for the syrups and toppings and mix-ins? Isn't that how sundaes and splits and Blizzards and DIY sold-by-the-ounce fro-yo bars were born, from this instinctive need to take vanilla and improve upon it by adding other stuff?

Ladelfuls of hot fudge, scoops of broken-up candy bars, crumbled-up brownies and cookies and pies, sprinklings of fruits and nuts (and sprinkles) are all awesome, sure, and can go a long way in camouflaging a weak ice cream product. But really great vanilla ice cream—served plain—appeals to the purist in me, too.

Like a perfect vanilla milkshake. Without all the add-ins and crazy bells and whistles, you can even get away with calling a vanilla milkshake the "drink" that accompanies your meal without looking like a glutton. ("A burger, fries, and a Peanut Butter Chocolate Chip Cookie Dough with M&M's Shake" implies a whole different level of writing-off the rest of the day.)

But if you're gonna do it, do it right. Which fast food outlets have vanilla milkshakes that actually go beyond "boring, plain, and unexciting?" We tasted shakes from nine nationwide chains, put our waistlines on the line, and braved the worst case of brain freeze in recorded history to find out.

Here's are the restaurants we tried, in alphabetical order:

When tasting the milkshakes, we evaluated them on consistency (were they creamy, dense, and smooth?), flavor (clean vanilla and dairy is what we were after), and value. Not all of the shakes made the grade—some were soupy, some had artificial or freezer-burned flavor.

Here are our favorites—the ones worth driving out of your way for.

When Chick-fil-A changes their storefront marquees to announce the rollout of the Peach Milkshake in summer, you can watch local traffic patterns change. But the vanilla is worth a special trip, too. Hand-spun and crowned with just the right amount of whipped cream and a cherry**, it has the perfect consistency: pleasantly thick, but it can still be worked with a straw almost immediately. (Good thing, since they don't have long spoons.)

**Chick-fil-A and Sonic were the only two shakes to feature a cherry with a stem. I point this out mainly because I think it adds to the "genuineness" of the overall package; a cherry with a stem feels less like an afterthought that was plucked from a jar of red dye and syrup. Maybe it still was. Maybe it's just a pricier jar. But it's a cool detail. And I dig cool details. Also, it's a reminder that I need to make friends with someone who can do that trick where they tie a cherry stem into a knot using just their tongue. 'Cos that freaking ROCKS.

Why was it our favorite? With genuine-tasting ice cream (even though they insist on calling it—cue the eye roll—"Icedream"), enough of it to feel substantial, and the ideal middle ground between thick and drinkable, Chik-fil-A hits it out of the park every time. I'm hard-pressed to not order a Dr. Pepper when I go (don't you tell me that the Styrofoam cup doesn't improve the taste), but when I have a hankering for a milkshake on any day but Sunday, it's awfully tough to do better than Chick-fil-A.

If excess is your thing (Hi, my name is Todd, and I have a problem...), Sonic is your milkshake HQ. Dozens of flavors and half-price happy hours are sweet enough, but Sonic's large shake weighs in at well over a pound and a half. That's more milkshake than one from Hardee's PLUS a large from McDonald's!

It's the priciest of the lot, but you're paying for quality as much as quantity. It's real ice cream, hand mixed, with whipped topping and a cherry. The ice cream was more yellow than white and absurdly rich. It was the thickest shake I tried; my straw was worthless for the first 15 minutes. (Maybe that's why I had to specifically ask for one.) And even once I moved from spoon to straw, it took some serious suction to get my flow on.

You may cry foul at Steak 'n Shake's inclusion in this milkshake cage match. "Fast food?" They come take your order at your table and have real dishes and silverware and stuff. True, but there's also a drive-thru, and that defines "fast food" to me. Plus, c'mon. "Shake" is in the name of the place. If I had to slurp through some of the bottom-feeders of this list, there was no way I was not getting in on some shake from a place that knows what they're doing.

Steak 'n Shake offers milkshakes in just one size. And while it may be tough to bypass some of the exotic flavors and side-by-side twofer shakes, the vanilla is no slouch. This was honest-to-God, hand-packed ice cream scooped out to order and combined with real milk. And it tasted every bit of it. Thick and rich, there was no artificiality to this shake whatsoever.

The Styrofoam cup was a bit of downer, mainly because I love getting the tall glass with my table service and having it accompanied by the leftover in the stainless steel mixing cup, so I can top myself off as needed. But shockingly, my to-go shake weighed in as the second-lightest of the group. I can't help but wonder if you get less shake for your dollar if you don't eat in.* Still, an awesome milkshake.

Note: This really bothered me. So I went back. I was seated and ordered a shake, which came to my table in the tall old-fashioned glass. Then I asked for it to-go. They brought an empty cup, the same size I had been given with my takeout order. The entire shake fit in the Styrofoam cup. So there goes that theory. I guess it just seems taller in the glass. And no extra shake in the stainless steel mixing cup for topping off. Didn't that used to be a thing???

Actual weight with packaging: 13.25 ounces, only size offered (2nd lightest)
Consistency in one word: Thick
Toppings: Whipped cream and cherry
Spoon or straw: You can suck, but you'll want to scoop, too
Price: $2.99 (tied for 3rd cheapest)

There was some debate about whether or not Wendy's classic Frosty even qualifies for our little roundup here. It's ice cream and milk, which certainly says "milkshake." But they never call it that. Except now when you go to Wendy's, they have something called a Frosty Shake. Except that's not available in vanilla. Confused? Me too.

Clearly, the poor kid behind the counter had never been quizzed on this conundrum before. He explained to me that a Frosty Shake (chocolate, strawberry, or caramel) "comes shooken up" (his words). The website points out that whipped topping and flavored syrup are also added. It's also more expensive than the classic Frosty, which comes in chocolate or vanilla and is "thicker." So there you go.

Yes, my vanilla Frosty was thick. It had that traditional almost-gritty Frosty consistency that made me want to start dipping some French fries in like when I was 8. I found the vanilla version to have a somewhat artificial taste, but I could have closed my eyes and told you that this was unmistakably a Wendy's Frosty.

Plus, the large Frosty was the cheapest of all the milkshakes—by an entire dollar—and nowhere near the smallest. So if bang for your buck is a factor, the pigtailed girl is a cheap milkshake date.

I guess I assumed Dairy Queen would fall in the middle of the pack here. I mean, yes, they built their entire brand on ice cream, but no one ever really raves about their ice cream, either. I found their soft serve to be pretty darn good, but well short of spectacular.

Whipped cream and cherry? Check. The shake was on the swishy side; I could suck it through my straw immediately and with ease. I was surprised to check my food scale (Yes, I brought one with me. Shut up.) to see that this was the third-heaviest shake of the whole lineup... despite being among the least expensive. It may get lost in the shuffle of Blizzards and Peanut Buster Parfaits, but the DQ milkshake may be one of the best values on the menu. 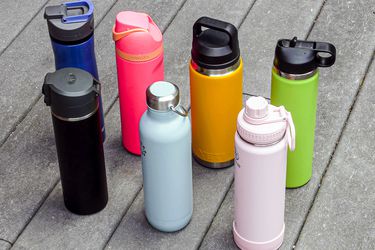