Southern cooking's been having a (long) moment, and every trendy restaurant these days pushes plates of shrimp and grits and cutesy crocks of pimento cheese. But what about the country cooking of the Midwest? Amy Thielen's fantastic New Midwestern Table celebrates iconic heartland dishes that haven't all gotten the nod of the cool kids—homemade braunschweiger (a soft, smoky pork pâté), beer cheese soup, and the homey chicken hotdish.

Thielen's cooking is inspired by her remote Minnesota garden (and the wild rice and fish harvested from nearby lakes) but she honed her kitchen skills cooking with chefs like David Bouley, Daniel Boulud, and Jean-Georges Vongerichten in New York. I asked her about her favorite cookbooks, from spiral-bound church collections to books that chronicle Europe and beyond. Here's what she had to say.

How many cookbooks are in your collection? I took this as an opportunity to actually count my cookbooks. I guessed that I had about 300. The real count was admittedly a little inexact as it entailed squatting and squinting to make out the books on the lowest shelf behind the desk, and the ones deep inside my bedside cubby, but it looks like—I had to laugh—I have exactly 299. I'm going to take that dangling number as a sign that I'm due for a new one.

How do you organize them? Organize them, you say? Do people do that? My cookbooks are mixed in with the novels and my husband's art books and our wilderness guides... anyone close to me will agree that I'm not very structured. But as my excuse, I will say this: my cookbooks get a workout. They're always in motion, rotating amongst our five large bookshelves. For example, I'll pluck one off the shelf and bring it to my upstairs office above the kitchen, where it lingers for awhile before I move it to the kitchen counter. It then migrates to the stack that sits on the steps up to the office, until it's time to clean up for a dinner party, at which point either I, or my husband, Aaron, will hastily re-shelve it. Somewhere new.

What cookbooks did you turn to for inspiration for your book? For my own book, my attempt to define and corral the sprawling Midwest, I looked at books that illuminated a specific place. The Country Cooking of Ireland, by Colman Andrews. Real Cajun by Donald Link. The Lee Bros. Southern Cookbook did a particularly good job of mixing past and present southern food and of resurrecting old recipes for contemporary cooks. They also bridged scholarship with story in a way that struck me as golden.

The Best of Shaker Cooking was forever at my elbow in those days, probably because of the rural influence, but also to turn my mind to the beauty of simplicity. (Not that their stuff is plain; the Shakers had all kinds of idiosyncratic recipes in their everyday arsenal: reduced apple cider used as syrup sweetener, defiantly simple cakes, and other cool stuff, like herb-laced pressed chicken terrine for picnics).

And then there's my collection of community cookbooks, those ringbound books published by churches and service organizations. As I was researching regional cooking, I thought of these books as my primary sources. I love the mix of esoteric ethnic dishes, such as Swedish Hardtack, with '50s cultural homogenizers like Spam Loaf. Pine to Prairie is the Minnesotan compendium of such books—basically, the mother of all church cookbooks—and it swells with gems, four recipes to a page.

But I think it was Edna Lewis who has the deepest influence on my book. Back before I turned professional, when we lived at our house here in its more rustic, non-electric state, I inhaled everything she wrote. To cook from In Pursuit of Flavor and The Taste of Country Cooking properly, you need a garden, a battery of cast iron pans, and fresh well-water—and I had it all.

"Those moments are what make a simple thing anything but, and it's exactly how all good country cooks—Midwestern, Southern, or from anywhere—make plain ingredients taste thrilling."

Her cooking reminded me so much of the way my mom and grandma worked: with adoration for perfect ingredients and an insane eye for detail. In the same way that my mom assesses a head of romaine, Edna Lewis surveys a leek. What's the age of that leek? Is the green part tender enough to keep? Some of her directions are charmingly counter-intuitive. She adds all of the ingredients to the shrimp scampi at once—the butter, shrimp, garlic and parsley—because when you do that, the garlic flavor stays high, instead of falling to the background. Those moments are what make a simple thing anything but, and it's exactly how all good country cooks—Midwestern, Southern, or from anywhere—make plain ingredients taste thrilling.

What are your most treasured cookbooks? I think Madeleine Kamman's When French Women Cook is pretty much a perfect artifact, mixing beautifully written narrative—incredible stories of cooking with various French women relatives and family friends, in different regions of France—with 250 (250!) totally fresh-feeling old recipes. I could read that one every night, and the recipes are all flagged up.

Paula Wolfert's World of Food was one of my first loves. The book seeps luxury—foie gras and truffles and walnut oil and smoked tongues, page after page—but the cooking is also very rustic. Rural and fancy, a combo I can't resist.

It was books like this one, with recipes that aren't for the beginner, that really catapulted my cooking early on. I learned a lot about good technique from Paula Wolfert and Marcella Hazan and Madeleine Kamman. All of these ladies have a not-quite-submerged bossiness that I love. Do it this way. And you know, from them it's endearing, because they know what they're talking about. They've earned that authority. I made Paula Wolfert's Chicken Tagine with Sweet Onions when I was in my early twenties, and I don't think we ate that night until 10:30 (damned peeled chickpeas!) but that idiosyncratic recipe was my first introduction to braising, to cooking meat so that it swapped juices with its sauce.

"It's as if he locates the heart of his particular and present craving every single night."

What recently published cookbooks really impressed you? I don't know why I was so late to the party, but it was only about five years ago that I found Nigel Slater. Tender is everything I love about cooking from the garden. It's not just the brilliant writing that makes me a fan (though the phrasing just kills me), but also the quiet, personal recipes. It's as if he locates the heart of his particular and present craving every single night. Nigella Lawson is good at this, too, at feeding the present hunger.

Also relatively recently, I fell really hard for The Art of Living According to Joe Beef. Those guys are hilarious, and Meredith Erickson, their writer and longtime employee, captured every drop of it—the reverence for classic French cooking, the irreverence for convention. The photos were also stellar—moody, not afraid of dark corners, and straight-on funny, which takes guts to pull off. In fact, I liked them so much that I hired the same photographer, Jennifer May, to shoot my own book.

Which lesser-known cookbooks do you think deserve more love? I have been collecting The Foods of the World Time-Life Series of books for years. Incredible resources, these books are a time capsule of world cooking circa 1960—before widespread travel and the age of the internet. The photography was amazing, so vivid and journalistic.

They were all authored by different people: The Cooking of Provincial France by M.F.K. Fisher might be the best-known, but my favorite is The Cooking of Spain and Portugal, by Peter S. Feibleman. I've read it through like a narrative numerous times, and my favorite snapshot is of him walking through a small Portuguese town on a drizzly day, kinda lost, eating a hot loaf of dark bread given to him by a women at the village oven. It's the best.

What cookbooks do you turn to for dinner party inspiration? I tend to devise menus loosely based on a theme or a place. It seems like I'm always cooking for a crowd, so I usually cook a big main dish, and then a whole bunch of smaller sides, mostly vegetables.

When I make Indian food I always reach for Lord Krishna's Cuisine: The Art of Indian Vegetarian Cooking. For a recent paella party I looked at Anya Von Bremzen's The New Spanish Table and picked up an idea for a green salad with apricots and hazelnuts. And for a Thai dinner party I was leafing through Pok Pok. The only recipe I followed even somewhat was his smoked eggplant salad with hard-boiled eggs, and it was a stunner. But leafing through the book gave me the juice and courage to throw different variations of fish sauce vinaigrette on all of the vegetables I had on my counter.

I admit that I am terrible about following recipes—unless they're my own and I'm testing—because when I cook I like to let out the rope, absorb myself in the process, and think about other things.

You want to give a cookbook as a gift. What book (and how do you choose)? I have been giving Marcella Hazan's Essentials of Classic Italian Cooking for years, but a few of those marriages haven't made it, so now I'm going to switch it up. Maybe a boxed set of Nigel Slater. It's always a safe bet to give resource cookbooks, and I like to introduce people to anything by Shirley Corriher (Bakewise is a classic) or Rose Levy Berenbaum.

I have a goddaughter who likes to cook and I'm looking forward to helping curate her collection throughout adolescence. Last year I gave her Home Made Winter by Yvette Van Boven—I thought she'd like the photos, illustrations, and the recipe for Microwave Chocolate Cake—and next I'm thinking of a run of Fuschia Dunlop's books, starting with Every Grain of Rice. 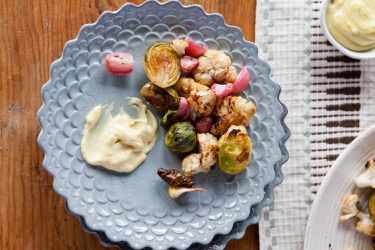 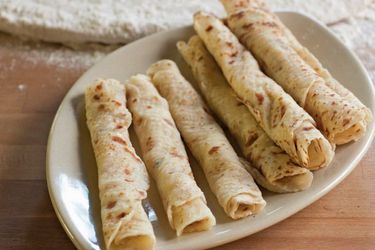 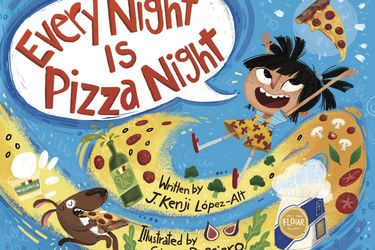