These bottles taste like they should cost way more than they actually do.

Michael Dietsch
Michael Dietsch is a barfly, boozehound, book hoarder, jazz fiend, and technographer. He has two cookbooks and writes about cocktails for Serious Eats.
Learn about Serious Eats' Editorial Process
In This Article

Rum, rum, hooray for rum! Who was ever too blasé for rum. Make this a night for rum! If we have to fight, let's fight for rum!*

*Sorry, sorry, enough of that. (With apologies to Harold Arlen)

We who love rum are very lucky people. It's a category of spirits that offers many wonderful values—bottles that taste like they should cost way more than they actually do. You can very easily find great rums, both white and dark at an affordable price, and today, I'll introduce you to a few of my favorites.

Try Angostura 5 Year in an old fashioned, especially if your simple syrup is made from Demerara or turbinado sugar.

Country of Origin: Trinidad and Tobago.
Style: Gold, aged five years.
Aroma/Flavor: Toffee, caramel, and chocolate, with hints of warm spices, such as cinnamon and nutmeg.
Overview: I'm listing these rums alphabetically, but I have to say that Angostura 5 might be my favorite rum on this list. Most Americans generally think of Angostura as a bitters company, but the Trinidadian distillery is one of the largest rum producers in the Caribbean. The Angostura 5 was a revelation to me the first time I had it; I was really amazed by how good it was for such a relatively low price. Sure, there are better (pricier) rums on the market, and as you go upscale in the Angostura line, you'll find some rich, delicious bottlings, especially the Angostura 1824. The 5-Year is a beauty.
Use: Try this in an old fashioned, especially if your simple syrup is made from Demerara or turbinado sugar.

Country of origin: Jamaica.
Style: Gold.
Aroma/Flavor: Light, smoky, brown sugar, and tropical fruits.
Overview: Appleton's entry-level dark rum is light in flavor but still tasty. It's noticeably younger and lighter than the Appleton Estate V/X. Appleton Special does the job very well if you're looking for a mixing rum. Though it's not intense enough to stand up to a spicy ginger beer, it pairs well with fruit juices and cola.
Use: Tastes great in a daiquiri or a Cuba libre.

Country of origin: Haiti.
Style: White, agricole.
Aroma/Flavor: Funkier and grassier than traditional rums, but not as pronounced as in other agricoles.
Overview: A great introduction to rhums agricole, which are made from freshly pressed sugarcane juice instead of molasses. When I was exploring the best rum to put in a daiquiri, I found I liked the version with Barbancourt White Rhum quite well, even though it wasn't the overall favorite. Barbancourt's older rhums are better sippers than this 4-year-old is, but this youthful bottling is quite good in cocktails—crisp but still complex. Barbancourt's three-star, 4-year dark rhum is also fantastic.
Use: Good in cocktails, daiquiris.

Country of origin: Saint Croix.
Style: Light, aged.
Aroma/Flavor: Mild hints of molasses and a bit of oak from the used bourbon barrels in which it ages.
Overview: Cruzan has a few bottlings under the $20 mark: the light, a blackstrap, and a couple of flavored rums. I've tried the light and the blackstrap; of the two, I prefer the light. Blackstrap is a bit of an acquired taste, and I've yet to fully acquire it. Blackstrap comes on strong with heady aromas of molasses and coffee, and the molasses notes follow through into the flavors of the rum. I find it a little intense. Cruzan Light, on the other hand, is a smooth, round rum, though it's not a satisfying sipper. If you want an affordable rum for a party, you won't go wrong with this one.
Use: Pairs well with fruit juices and is fine in cocktails.

Country of origin: Puerto Rico.
Style: Silver, aged.
Aroma/Flavor: Fresh grass, wet soil, and vanilla sweetness with hints of mild white florals, coconut cake, and dried tropical.
Overview: Made in a style similar to Bacardi, it's probably the best value, ounce for ounce, of any of the rums in this list. It's a good mixer. I'll admit that during a period in which my wife and I weren't making much money, I drank more than my share of it, on the rocks. It's not a great sipper, but it's okay for that if you're broke. Don Q's Añejo is also good, though not quite the bargain the Cristal is.
Use: Makes a fine daiquiri and works well in other cocktails that call for white rum.

Country of origin: Guyana.
Style: White, aged three years.
Aroma/Flavor: Chocolatey and aromatic, with a hint of funk.
Overview: I hate myself for taking so long to come around. El Dorado's rums are fantastic, rich, and smooth. The 8-year tastes like it should cost twice as much, and the 15-year is one of the best things—food or beverage—I've ever tasted in 40-something years on earth, no hyperbole. But neither the 8 nor the 15 meet our price requirements. The 3-year does. It's an aged rum, filtered to smooth out the youthful flavors and remove the colors imparted by the barrel. It's a surprisingly good sipper.
Use: It shines in cocktails. If you like piña coladas (and getting caught in the rain), this is for you.

Country of Origin: Nicaragua.
Style: Light.
Aroma/Flavor: Dry, crisp, and mildly fruity.
Overview: Flor de Caña is an excellent rum for its price. Flor de Caña has a long history in Nicaragua, dating back to the 1890s. The Extra Seco is light-bodied, with a round, smooth taste and a medium finish. I find that it tastes pretty good just on ice, but it also mixes very well.
Use: Enjoy it in a daiquiri, but it would also taste fantastic in a mojito or an El Presidente.

Country of origin: Bermuda.
Style: Black, aged three years.
Aroma/Flavor: Caramel and burnt sugar with hints of vanilla and butterscotch.
Overview: The darkest, richest rum on the list, Gosling's is made from a blend of rums (both pot- and column-stilled) imported into Bermuda and aged three years in former bourbon barrels. I don't usually enjoy sipping it, but it's great in cocktails.
Use: Gosling's is delicious in a Cuba libre or a Dark 'n Stormy. If you're mixing the latter, though, get a sharp and peppery ginger beer, or the rum will overwhelm it. Barritt's is traditional, though Gosling's now also markets its own ginger beer, specially formulated for mixing with its rum.

If you're making a Dark 'n Stormy, choose a sharp and peppery ginger beer, so the rum won't overwhelm the drink. Gosling's also markets its own ginger beer, specially formulated for mixing with its rum.

Country of origin: Barbados.
Style: Dark, aged five years.
Aroma/Flavor: Notes of banana, burnt sugar, dark chocolate, and caramel.
Overview: Rich and fruity, Plantation is another entry on this list that tastes like it should cost much more than it does. The Plantation brand bottles rums from all over the Caribbean, plus Guyana and Nicaragua, though this particular rum is from Barbados, as you probably guessed from the name.
Use: It's great on its own but just as good mixed in punches, an old fashioned, or a mai tai. The Plantation website also suggests pairing it with a cigar, and I can see that working fantastically, if you're a cigar smoker.

Country of origin: Panama.
Style: Dark, aged seven years.
Aroma/Flavor: Honey, vanilla, and slight smoke.
Overview: Abuelo has a couple of bottlings that would fit on this list: the Abuelo Añejo is about five years old, a decent rum, and a good sipper for the price, but nothing special. Spend the extra money and get the 7-year. It's rich and smooth and has a long finish.
Use: As with just about everything else on this list, it mixes well and also tastes great just with a little ice. 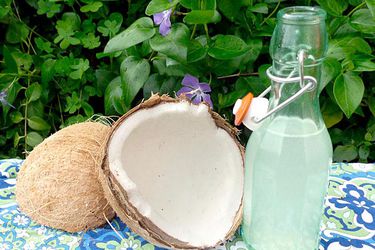