What I'm trying to say is that I, as a half-Japanese, half-white American male from the Northeast who has never been to India or Pakistan, am undoubtedly going to offend a couple of people with my idea of what great channa masala should be. But that's okay. My defense is going to be the only defense food should ever need: This stuff tastes damn good.

Almost all channa masala recipes start with an aromatic base of onions, garlic, ginger, and chilies. The onions are typically browned until just before they start to burn and turn bitter. Unlike with a traditional French Onion Soup, in which the onions are cooked slowly enough to become candy-sweet in the process, here we're looking for browning with only mild sweetness. We also want the onion to break down fully, which helps lend body to the sauce later on.

As I stared into my pot of caramelizing onions, a we've seen this s#&t before lightbulb went off in my head. In the past, I've explored methods designed to speed up onion caramelization, such as the addition of baking soda to increase pH, adding a touch of sugar, and using high heat combined with frequent deglazing. Using these processes, you can get darkly caramelized onions in a matter of minutes (here's a video that shows onions caramelizing in under 15).

The addition of garlic, ginger, and chilies varies quite a lot in different channa masala recipes. Some have you chop and sauté the aromatics with the onions, which leads to more sweet richness. Others have you pound them all together with a mortar and pestle into a fine paste that gets added just before the spices. This technique yields much brighter results.

I liked the brightness of the freshly pounded garlic, ginger, and chilies as a way to contrast the deeper notes of the onions and spices, but, at the same time, I didn't want too much of the raw, pungent bite that garlic can have. You see the issue? Cook the garlic with the onions, and I lose freshness. Add them with the ginger and chilies, and I have too much bite. There had to be a solution.

So this time, instead of pounding the garlic, ginger, and chilies together alone, I tried pounding them with a tablespoon of lemon juice in the mortar and pestle, along with a pinch of salt (for its abrasive properties), then dumped the whole thing into the pot after my onions had sufficiently browned. It worked like a charm, giving me the best of both worlds.

I doctored up the store-bought stuff with a few extra common spices: Coriander seed, cumin, black pepper, and turmeric are all easy-to-find pantry staples. The only other spice I used that's not quite as common is black mustard seed.

With a garam masala that's going to be added straight to a liquid-based dish, the spices ought to be toasted before grinding in order to develop flavor and complexity. But for a dish in which the spices will be bloomed directly in oil, like in this recipe, pre-toasting is less of a priority. It certainly doesn't hurt to do it, but the effects on the resulting dish will be less pronounced. I made a couple of versions of the channa masala, adding ground spices directly to the pan while sautéing the ginger/garlic/chili mixture, before adding some canned tomatoes that I crushed by hand (canned tomatoes are so much better for cooked applications like this than most fresh tomatoes you can get) and a big handful of chopped cilantro leaves.

I really love the texture and flavor added by cumin and black mustard seed sizzled in hot oil—they flavor the oil, which in turn lends a nice earthy base to the entire dish—so I added that step to my recipe, heating oil, dropping in the spices, and letting them sputter before adding my onions to brown.

(And don't even start with me about serving an Indian dish in a Turkish vessel. I don't want to hear it!) 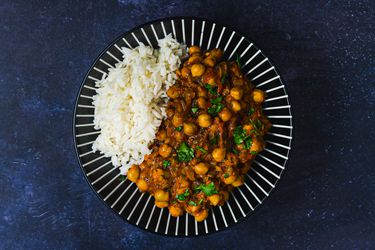 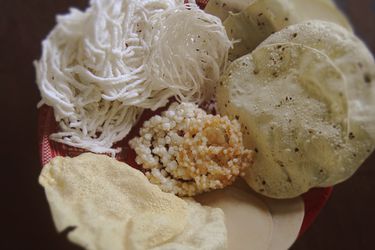