Bad rye whiskey? Sadly, there is such a thing as bad rye; usually, the juice is so young, it has no nuance or subtlety, and all you get is fire and unpleasant fruity flavors. But enough about the not-so-good stuff. Let's talk instead of the stars of the budget-rye universe.

Good rye should be spicy, somewhat fruity, and a little more rugged than bourbon. A common analogy is to compare rye bread to corn bread, and use that comparison to point out the differences between rye and bourbon. (The analogy is imperfect, but it's a reasonable starting point.)

Rye is so hot right now that it's hard to find good 750-mL bottles for less than $20. So today I'm setting the limit around $25. Here are my 6 top picks, plus a few honorable mentions.

You knew I'd start here. And why wouldn't I? Even though Rittenhouse's price point has risen along with its star, this rye is still a great value. (Though I miss the days when I could get it for fifteen bucks.)

Rittenhouse is spicy, like you want a rye to be, with light woody notes from the barrel and hints of cocoa, vanilla, and caramel. There's something to the finish that almost suggests pastry. Rittenhouse is great on the rocks and in cocktails. It's the backbone for my favorite Old Fashioned, for example, and it's also excellent in a Manhattan. (The proof is high enough that you can be generous with the vermouth, and the drink won't get too sweet.) I also love Rittenhouse in a Boulevardier, the whiskey-based variation on the Negroni.

Overholt is a little milder and softer than Rittenhouse, and it's a good rye for anyone who is used to drinking bourbon or very smooth Scotch. (Rye nerds might want something a bit more pungent.) Overholt is light and herbal, only mildly woody, and with a fruity aroma. Overholt appears in an episode of Mad Men, when Don Draper mixes an Old Fashioned for a hotelier he meets at a wedding. However, in that era Overholt was still a 100-proofer. I'd love to try some, if any of you find it at an estate sale or something.

Most rye in the United States is produced in what's called the Pennsylvania style (also known as Monongahela style), based on a style common in early American rye distilling, when most rye was made in Pennsylvania. Pikesville is perhaps the last known example of another style: Maryland. This type of rye is lighter and grassier than the Pennsylvanians, and also smoother and somewhat sweeter. Pikesville, like Rittenhouse, is made in Kentucky by Heaven Hill. For those of you who can find it, it's a good bargain.

The next three ryes on the list have two things in common: First, they're all distilled at MGP Ingredients in Lawrenceburg, Indiana, and bottled by people who didn't distill it. (I have no problem with this, but I do wish companies would be more transparent about it. In the end, however, I honestly doubt very many consumers other than whiskey geeks give a rat's ass.)

Next, they all have a 95% rye mashbill, which is quite high for a rye whiskey. (By law it must be 51% or higher.) But they're different ryes. I'll talk a little about why.

First, Redemption. Spicy, rich, fruity, and mildly sweet, Redemption simply tastes more rye-forward than, say, Rittenhouse or Overholt. Some people don't like it for that very reason, but though I still prefer Rittenhouse's better balance, I still really enjoy Redemption's rye punch. Redemption is about 2 or 3 years old; it's hard to pin down the bottler on exactly how old. I think it's fine on the rocks, but it's better as a mixer.

Younger sibling to Redemption, Riverboat is aged for a mere two years. It's the same stuff that's in the Redemption bottle, but it's younger and unfiltered. A retailer in Rhode Island told me once that it's also aged entirely on the bottom racks in its warehouse, but I can't verify that independently. The same whiskey aged at different locations in the same warehouse can taste different thanks to temperature variations. Riverboat is definitely a young rye; it's good in cocktails, but not your best choice for serving neat.

The difference between this and Redemption and Riverboat is that the Dickel Rye is finished with the same charcoal filtering that Dickel Tennessee Whisky gets. Dickel is smoother and easier to sip than Redemption or Riverboat. It's not as spicy as other ryes and it presents some citrus and a bit of soot from the charcoal.

There are some great ryes out there that just barely miss the $25-and-under mark...or that are simply unavailable right now. Sazerac (the 6-year-old variety, also known as Baby Saz), for example, costs about $30 in my market. I love it for, well, for Sazeracs, but it's also great on its own, either neat or on ice. And it makes a lovely Old Fashioned. Bulleit Rye is another product of Lawrenceburg, Indiana. In California you might find it for $22, but most other places, it can clock in at $30. It's rich and peppery, with some fruitiness. It complements the Bulleit Bourbon really well somehow, even though it's made in a different distillery and a different state.

One rye that I really miss is Wild Turkey 101 Rye; it's sadly (mostly) off the market. I was buying it when Rittenhouse was on a shortage, and it quickly became my second favorite rye. And I was getting it for about $21, so if it were available, I'd list it here.

Tell me, what is your favorite rye whiskey under $25? What would you add to this list? 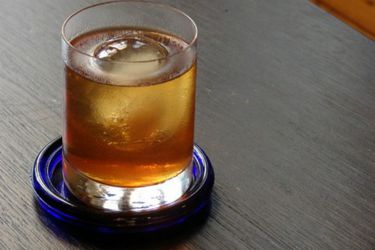 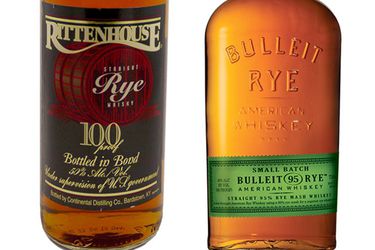