Quick! You've just woken up. You regret having a salad for dinner. Maybe you're a little hungover. You're hungry. So what are you craving?

If you're like us, it's probably a breakfast sandwich of some sort. An egg and cheese, or a biscuit with sausage, or some avocado toast. Whatever your personal poison, breakfast sandwiches are the most wonderful gift to bleary-eyed souls before their first cup of coffee.

We reached out to Serious Eats contributors around the country and asked them, "what's your ultimate breakfast sandwich?" These are their answers.

Atlanta: The Miami Hangover at The Red Eyed Mule

Thou shalt always make enough meatloaf for leftovers. (Pretty sure that was the implied Eleventh Commandment.) It's one that Sabra Wood at the Red Eyed Mule follows, anyway, for her once-a-month breakfast special, the Miami Hangover. She doubles her mom's meatloaf recipe when she makes it from Certified Black Angus chuck on Thursday, lets the flavors intermingle overnight, smokes it low and slow on Friday over a cherry/pecan/hickory wood blend, pulls it at just medium and pink, and glazes it with chipotle barbecue sauce. What doesn't sell for lunch that day is slipped into her otherworldly buttermilk biscuits the next morning (when it's better anyway) with cheddar, a fried egg, and a healthy dousing of house gravy. Whether it's the tail end of a rough Friday night or the early start to your Saturday, the Miami Hangover is exactly what you need. Call ahead to see when it's available. — Todd Brock

House-made sausage and cheese screams lunch, but Noble Sandwich Co. in Central Austin also does an impressive breakfast. The chorizo and egg sandwich is almost like eating a torta ahogada for breakfast. If you order it on a homemade challah roll, the bottom half is so deftly dipped in a tangy and spicy salsa that the sauce doesn't soak through and sog up the bread. That roll is then topped with finely ground spicy chorizo, melted sharp orange cheddar, and a fried egg that's cooked just long enough to avoid yolk dripping down your arm. — Meredith Bethune

You can expect a stellar sandwich shop like Cutty's to make a perfect egg sandwich. Rich brioche gets tender scrambled eggs, sharp cheddar, and your choice of sauce (truffle ketchup, spicy mayo, or red-eye mayo). You could stop there and have a perfect morning, but then you'd be missing toppings like beautifully crisp bacon or tender braised greens like Swiss chard. Or on this sandwich: both. They're worth the extra cost.

Two Boroughs Larder is not under the radar, exactly. Chef Josh Keeler, who runs the place along with his wife and front-of-house manager, Heather, has been up for a James Beard and a host of other awards, and Two Boroughs does tend to make the must-eat lists when national publications come to Charleston. But the caliber of the food exceeds even the restaurant's good reputation. And as it happens, Keeler and his team have a knack not only for cured meats and Phaidon-worthy plating, but also for the simplest of breakfast sandwiches. The scrapple sandwich, a shout-out to Keeler's Pennsylvania roots, contains a rich and elegantly seasoned patty with crispy edges and a soft interior that collapses into a thin, peppery layer, soaked through with egg yolk and a lightly melted slice of aged cheddar. — Jed Portman

It shouldn't surprise anyone who's eaten at Rick Bayless's Xoco that the Chorizo-Egg Torta is worth waking up early for. Soft scrambled eggs, ripe, buttery avocado, and two kinds of cheese (totally melted jack and salty, crumbly queso fresco) form the sandwich's creamy core. But they're all just there to highlight the mind-blowing chorizo, commingling with roasted poblanos, falling apart into a soft stew of cinnamon and vinegar-laced meat so good that I'm tempted to pull apart the sandwich and just eat it with a spoon. This sandwich is only served in the morning, but latecomers, fear not; an egg-less chorizo torta appears on the lunch menu, too. — Nick Kindelsperger

While Eggslut—yes, that's really their name—made their bones on their Fairfax sandwich, a mix of scrambled eggs, caramelized onions and sriracha mayo, it's the reimagined sausage, egg, and cheese that is the morning's true winner. An upscale take on the fast food classic, this monster is stuffed into a warm Portuguese bun that's given a light toast on the griddle. A fried egg is turned to over medium and slapped with thick cheddar cheese while the hefty house-made turkey breakfast sausage leaves the sandwich looming. Add a swipe of snappy honey mustard aioli for a sandwich ready to send you straight back to bed. — Farley Elliott

New Orleans gets a bad rap for being a place where you can only get dishes caked in sugar, fried batter, or roux. While there are definitely plenty of those to go around, you might want something a little lighter at breakfast, so long as it's still a total knockout. So meet this classier take on a croissandwich with peppery arugula, creamy avocado, and an over-easy egg, which hits the sweet-spot of indulgence with enough green for you to call it "healthy." — Sarah Baird

While the classic New York breakfast is a bodega hard roll stuffed with a fried egg and American cheese—scarfed down with one hand as you rocket down the 6 train—the ultimate New York breakfast requires a trip to Houston street to visit the House That Lox Built: Russ & Daughters. You're here for salmon that melts in your mouth, cream cheese without any gunky filler, and slices of red onion and tomato that still have some juicy bite even in the dead of winter. But be smart and order your sandwich on a bialy from nearby Kossar's, which is more slender (and usually fresher) than the bagels from Bagel Hole, because you don't want a big bite of carbs to distract you from fish this good. And remember that at Russ & Daughters, "lox" means exactly that—the Jewish treat of extremely salty, extremely fatty, and un-smoked belly lox. If you prefer smoked salmon, go for an option like the Gaspe Nova. — Max Falkowitz

Pork roll and scrapple tend to dominate the a.m. eating conversation in Philadelphia, but you won't miss the meat with this sneaky-simple breakfast sandwich. Anyone put off by the idea of carbs as a sandwich base has not enjoyed a "good ole potato and egg" from Fitzwater Cafe, a gooey salutation to Philly simplicity. Chef Stacey DiPlacido-Guokas has been making this thing she was five: eggs, American, and Parm, all scrambled and melted around crispy Yukon gold hunks roasted with generous hits of rosemary and garlic. The filling takes up residence on a roll from Sarcone's, the sacred Italian bakery located two blocks from Fitzwater's kitchen. — Drew Lazor

San Diego: The Ultimate Breakfast Dip at The District

The Ultimate Breakfast Dip from The District starts as a fairy ordinary ham and cheese sandwich, then takes a sharp turn to Breakfastville. Muenster cheese and smoked ham are stacked with tomato, spinach, and a squirt of Meyer lemon thyme aioli between slices of toasted sourdough bread. Next, the sandwich is briefly griddled before being topped with spicy tomato broth and a fried egg. You'll need a fork and knife, but the interplay of textures (and the full-flavor broth, which introduces serious heat and acidity) is well worth the effort. Bonus: it's available all day long and comes with a free coffee. — Erin Jackson

Trou Normand gets packed with a lively cocktail crowd come evening, but no one seems to know that mornings at this gorgeous SOMA spot are the nicest. Linger with a coffee from Four Barrel, and order this monster of an egg sandwich. The house-made ham is the star: so tender and sweet it'll make you vow to return for a full charcuterie plate. Runny-yolked eggs complete the picture, framed in an Acme roll with a smear of rich aioli and a slice of tangy Tillamook cheddar. — Maggie Hoffman

The newest outpost of Chef Nate Anda's expanding butcher and sandwich empire, Red Apron in DC's Penn Quarter, has a special twist—tigelles. Tigelles are delicious, dense Italian flatbreads griddled in lard. They shop up several places at Red Apron and its sister restaurant, The Partisan, but are featured most heavily in its breakfast sandwiches. Taking the place of the expected biscuit or English muffin, the tigelles bookend combinations of egg, hams, and cheeses. Red Apron's "Buenos Dias" (with egg, chorizo, cheddar, pickled onion, and sour cream) is a South American riff on an Egg McMuffin. Bolder flavors and heat from chorizo and pickled onion, the Buenos Dias is a more adventurous breakfast sandwich with a bit of a kick. Every edge is griddled and fried to perfection, each bite is a satisfying blend of crisp, rich, savory flavor. — Brian Oh 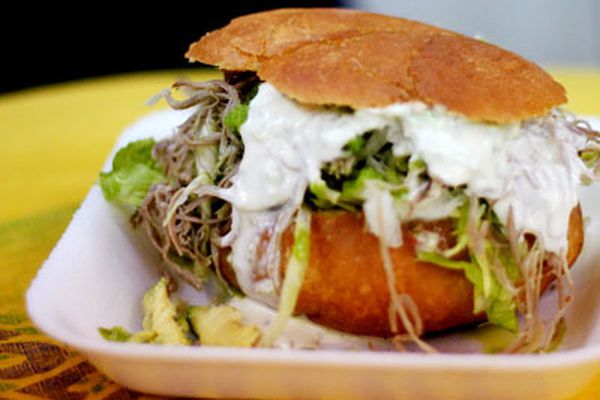 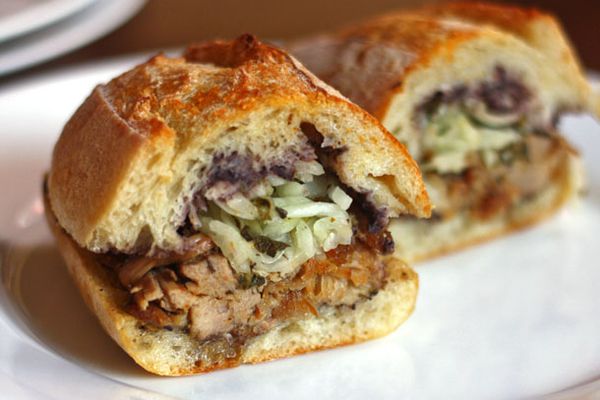 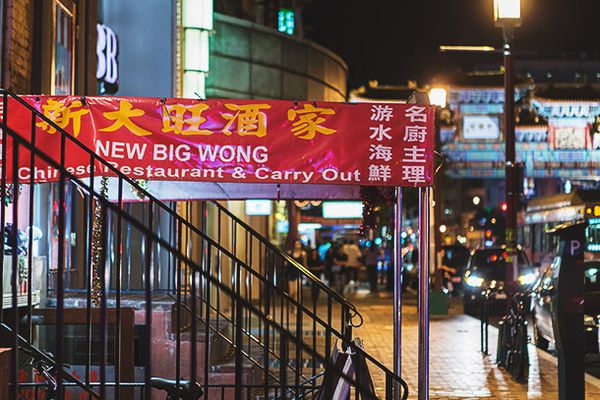 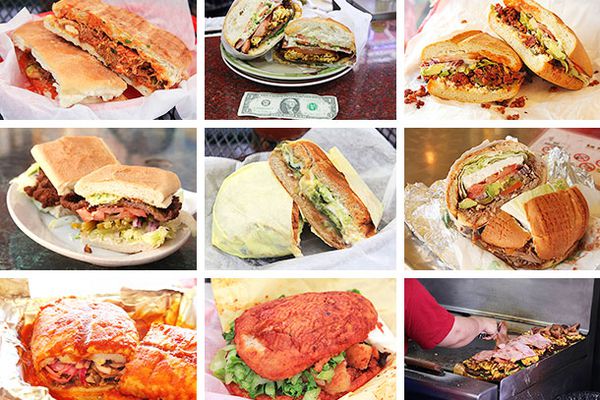