It's easy enough to throw some steaks on the grill, but if you're really into grilling, you just bought your first smoker, or you're a longtime barbecue obsessive, it's worth looking around for some inspiration beyond the basics, and some tips for upping your barbecue game. Here are a few books we love to get you through grilling season.

"I can't say enough about Peace, Love, and Barbecue by the father-daughter team of Mike and Amy Mills of 17th Street Bar and Grill. Although many years old now, it came out just as I decided to buy my first smoker, and quickly became my bible in learning the ropes in creating excellent barbecue. A mixture of recipes from a man simply known as "The Legend," and stories of the pitmasters who helped shape our nation of barbecue, this is a must read for cookers or barbecue fans alike. The table of proper temperatures for barbecue meats in the back is worth its weight in gold alone."—Joshua Bousel, Grilling Columnist

"This book, Wicked Good Barbecue: Fearless Recipes from Two Damn Yankees Who Have Won the Biggest, Baddest BBQ Competition in the World hit the shelves this winter, just when I decided to take up competition barbecue. Written by Andy Husbands and Chris Hart of the immensely successful IQue barbecue team, this is the first barbecue book that I've seen that doesn't hold back the secrets of what it takes to make award-winning 'cue. The recipes go in depth, showing all the steps, timing, and temperatures needed to churn out meats that have the deep flavor profiles and strong presentation that win competitions.

But that's just the beginning—this book goes way deeper, branching out into the territory of pig ear terrine, duck pastrami, and other unique recipes. I also have to give a shout out to my buddy Ken Goodman for the photography, which makes this book as mouthwatering as it is informative."—Joshua Bousel, Grilling Columnist

Grill It! by Chris Schlesinger and John "Doc" Willoughby

"Francis Mallmann's Seven Fires takes the primal love of fire to a whole new level. The Argentine chef has penned a unique volume devoted to the art and craft of cooking over a wood fire. The flavors that come along with charring are Mallman's passion. Mallman's seven fires are made up of the following cooking methods:

Through wood-fired grilling Mallman explores the diverse cuisine of Argentina which has been influenced by both Europe and Native South America. Don't worry if you're not about to go and break out the welding gear and dig a fire pit in your back yard—Mallman offers smaller scale options for all of the recipes in this book."—Caroline Russock, Cook the Book

Smokestack Lightning: Adventures in the Heart of Barbecue Country by Lolis Eric Elie

"Driving from one side of the country to the other, our heroes—a Louisiana writer and a Memphis-raised, New York-based photographer—explore the roots, manifestations and impact of barbecue as part of American culture. One chapter focuses on the visceral narration of pit-smoked barbacoa. Another reaches deeply into formative years on the south side of Chicago. Another documents Juneteenth, a reverent and raucous relic of an independence day for black America. The complete collection of tales is simmering long form: vibrant in its respect for regional character, tactful in its blend of observation and rumination, and honest in its conclusions about the journey. Smokestack Lightning is a book that cannot be recreated or grafted, and as a piece of storytelling it stands head and shoulders above its peers in the "barbecue" section."—James Boo, Barbecue columnist

Barbecue: The History of an American Institution by Robert F. Moss

"Documenting its subject from pre-Republic times to the present day, Barbecue: The History of an American Institution draws on ten years of food research to highlight intersecting narratives in the history of the United States. It's an accessible foray into culinary evolution with a journalist's sense of style—in his scholarly approach to smoked meats, Moss replaces the repetitive talking points of television, magazines and lesser books with an engrossing set of stories. If you've ever wanted to know why American barbecue matters, this book is nothing short of essential."—James Boo, Barbecue columnist

Tell Us Your Picks!

We've shared our favorites, now tell us yours. What books do you turn to for grilling and barbecue inspiration? 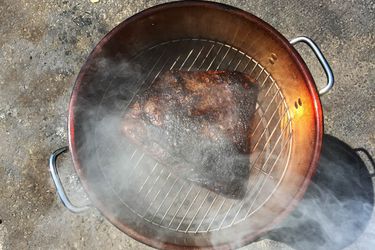