People always ask me: How does it feel to be your own boss? I can't say there's one specific feeling, or that it's inherently better than not being my own boss. After all, lots of people live perfectly free and fulfilling lives working for someone else. I've talked about the toll that being a boss takes on you. But I've never told anyone about the leitmotifs—the particular notes and sounds associated with bossdom.

Leitmotifs are short recurring notes that evoke specific emotions and themes throughout a movie or opera. If you're a fan of Star Wars or the Lord of the Rings film trilogies, you've heard hundreds of leitmotifs—danger, hope, the Force and the Ring—through their massive musical scores.

Here are the leitmotifs of my life now.

The White Noise of 'How About You'

My days are filled with a hundred voices screaming for my attention. There's the day to day of running a restaurant—the mislaid checks, the equipment that's constantly breaking—and then there are the suggestions. From the moment I awake at 7 a.m. to the minute I leave the restaurant at 11:30 at night, my wife, staff, partners, guests, vendors, neighbors, and random passersby all have suggestions for me and my restaurant. It all congeals into one ball of white noise, buzzing in the background.

One day I tried recording it all. I carried a notepad with me all day and made a tally every time someone gave me one of those "you know what you should do" suggestions. The total: 53.

Let's say, hypothetically, I received only half that many: 26 a day. That's 182 suggestions a week, 780 tips a month, all that I have to consider while dealing with broken equipment, staff conflicts, upgrading my electrical service, 17 hour work days, worrying about the rent, issues with workman's compensation insurance, and restocking my inventory.

Sometimes it may seem like restaurant owners aren't interested in hearing your suggestions. The truth is that we do listen, but your voice is drowned out by a few dozen others. There's never enough time to weigh pros and cons, no room in the day to perform cost-benefit analysis. We get to things as we can, but we're always behind. The buzzing continues.

The one group of people we business owners reliably draw advice from is ourselves. Fellow restaurateurs most readily give straight answers to questions like, "which mid-priced mezcal are you pouring and how's it moving?" "Do you have a last-second electrician?" "Who does your garbage collection?" "Who's the distributor for XYZ obscure beer?"

There will always be an asymmetric relation between spending money and making it. 99% of advice coming in usually involves me having to spend money, which means I can't afford to pursue every good idea. Most are dead before they start, because even though an idea (new menu items, better additions to our outdoor space) might make us more money down the line, the massive upfront cost negates any eventual return on investment. The mental energy to turn down the endless parade of tricks and gimmicks just keeps the buzzing in my head going, and all I want is some silence.

One Friday afternoon, my day prep crew and I were setting up for evening service. We had an art show of 100 sandwiches to cater, a birthday party of 30 coming in at 7:30 p.m., my weekend beer delivery was late, and one staffer had already called out sick. In short, the day was going great. Then out of nowhere I heard a wrenching wail from my table busser. His common law wife just passed away in the hospital. We all knew she was dying, but the doctor had given her a few more weeks.

I've never had anyone crumble onto my shoulder before, a soul so destroyed by grief that it grasps on to whatever branch is available just so it doesn't sink any further. Make no mistake, this wasn't my favorite guy in the world. I've chewed him out plenty of times and actually fired him twice. But at that moment, I was the one he was leaning on.

People who live on the fringes of society are truly alone. Years of substance and alcohol abuse have burned bridges, destroyed friendships, and alienated families. So my porter had no one to take him to see his wife for one final time. It wasn't good business for me to drive him to the hospital, with the day's work looming over my head, but I knew what it felt like to not be able to say good bye. Was it my responsibility to take care of him? No, but he shouldn't have to spend this time alone.

We journeyed up to the Bronx, and all the while I called extra staff in to cover and get ready for the crush, made four separate phone calls cursing out my beer rep on where the hell my goddamn delivery was, and gave my business partner a breakdown of the evening's events, should I not be able to get back on time.

I've had many expectations on where my barbecue journey might take me, but never did I guess I'd find myself there. Morgues are frigid, ugly places, but they're quiet, and while there I got a taste of the silence I'd been craving. And it struck me that I'd been thinking about the white noise all wrong. Being alive means white noise. All the suggestions, the responsibility, the chatter—this is the kind of thing that people lucky enough to live their own dreams get to hear. It's the leitmotif of my journey.

As we left the morgue, the nurse put her hand on his shoulder and said, "It is good that you have your friend here to support you." "That's not my friend," he replied. "That right there is the boss."

At 4 p.m., we roll up the security gate, which creaks and crinkles and fills our dining room with afternoon light. Even though I'm running around all day, this is the sound of the beast awakening. Every day is a new business day, and this is when the Swine's day begins. I've come to expect this sound now; it's jarring when I don't hear it.

Then there's my lead cook jamming his playlist, which ranges from Bollywood tunes to Chinese opera and West African drum beats. There's the hiss of the waffle irons as we press our mac and cheese into its final form. The thuds from the chopping of the whole hog. The clink of pint glasses as we pull them out to pour beer.

I love it when people play my giant Jenga game. More accurately, I love it when the pieces finally fall. The pattern is always the same: gasp, nooooooo, crash, laughter, applause. I love the sound of a cocktail shaker. We could definitely get more appreciation for Shakespearean sonnets if we mixed up some whiskey sours in class: iambic pentameter with a cherry garnish.

The 19th century composer Franz Liszt is one of my favorites. Even more than his music, it's his walking stick that I connect to. Liszt always carried a wooden stick around with three images carved into it: St. Francis of Assisi, the devil Mephistopheles, and Gretchen from Faust. They represented the human desire to do moral good, the worst that is in all of us, and the temptations of the world that draw us from our potential.

"That's the thing about being a boss. It's par for the course for your staff to let you down, but it's unacceptable for you to do the same."

We're all Liszt's walking stick, and it's no accident that those two bottom characters can gang up on the top. Your crew will disappoint you, will steal from you, will let you down. I've even had one guy move to a new job and try to poach my team. All the same, there are times when I disappointed and let my people down—times when I failed to lead. That's the thing about being a boss. It's par for the course for your staff to let you down, but it's unacceptable for you to do the same.

In music, we talk about the "culmination" of a piece: The climax that ties the entire song together, whether it's that face-melting electrical guitar riff or the choir unshackling their voices to a soul-quaking fortissimo. As the music spirals higher and higher we close our eyes and let it drag us to that higher truth: human potential is real. We can do good. By the end of 2014, I saw my culmination.

My assistant Roland came from the Doe Fund, a halfway house for the homeless. Mistakes from a previous life guaranteed that his resume was heading into the trash can everywhere he looked. Even his parole officer called me, asking if I was sure I wanted to have him around. In Roland I found a student, one who was eager not only to work but also develop a passion for cooking whole hog barbecue. If you ever walk by the Swine at 2 a.m. and smell the smoke from our burning oak logs, wave towards the pit room. You'll likely see Roland smile and wave right back.

Towards the end of 2014, Time Out magazine compiled a top 100 list of dishes around New York City. In the meat section stood our whole hog barbecue. I posted a picture of Roland for all the world to see. Here was a man who before the Swine never worked a day in the kitchen, competing head to head with the best and most talented chefs in the world. He looked triumphant, and I was bursting with pride.

That's when the music started. The culmination beat out the white noise, and whatever nagging voices of doubt in my head got drowned out by a song of optimism.

This is the best music a boss can hope for: the sound of doing good, and building up our people. 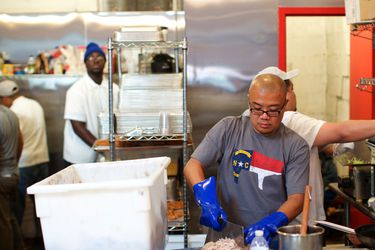 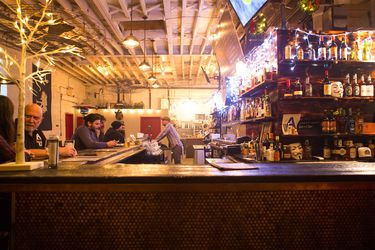 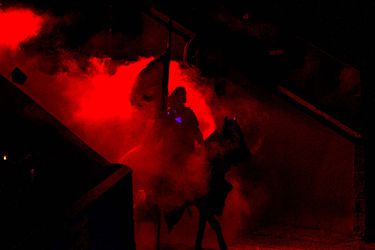