When it starts to get chilly, I turn to the oven for most of my cooking. I crank it up on most fall and winter nights to produce uncomplicated meals of roasted vegetables, meat, and fish. Not only is dinner effortlessly served, but the house is warmed and my stovetop stays clean. When I want a little more than a sheet tray of roasted roots and tubers, gratins offer a way to step up my winter vegetable game without much more effort.

A gratin can be anything baked in a shallow dish with a crispy topping. The filling is spread thin and wide to maximize the crunchy topping ratio. The most ubiquitous gratin is made by layering sliced potatoes with milk, cream, and cheese. After baking in the oven, the top layer of potatoes become crusty and browned, while the potatoes underneath stay tender and creamy. This method works with anything, from plump summer squash to sweet parsnips, yielding dynamic textural and flavor contrast from a single vegetable.

Here I slice and layer beets, before bathing them in a chili-spiked cream and topping it all off with a crisp pistachio crumble. It takes minimal effort, easily fitting into your weeknight routine, but is spectacular enough for any holiday table. The beets do most of the work; their jeweled, ruby color is anything but reserved.

To balance the beets' natural sweetness and enhance their earthy flavor, I steep the milk and cream with chipotle peppers. I prefer the subtle flavor of the dried peppers over the versions canned and in adobo, which contain additional spices and vinegar. Dried chipotles are available in two varieties: meco, which are very smoky and intense, and the morita, which are only lightly smoked, retaining much more of the pepper's fruity and floral characteristics. I used the morita here for the hint of acidity and warmth they add to the final dish. If you can't find moritas, a smidge of chipotle pepper in a adobo or a pinch of cayenne combined with smoked paprika offer similar qualities in a snap—just skip the steep step, as the acidity in the canned chilies can cause the milk to curdle.

While the cream is steeping, carefully slice the dense beets using a sturdy mandoline slicer. The key to a sliceable and tender gratin is to make sure the slices are thin and even. Aim for one-eighth inch or thinner for a gratin that bakes evenly and slices cleanly. Thicker slices will take longer to bake and will fail to hold together when cut into individual portions.

Because beets have less starch than the Russet potatoes typically used in a gratin, they need a little help to bake into a creamy and rich side dish. I took a cue from fruit pies and crumbles, tossing the sliced beets with a small amount of cornstarch before layering them together in a baking dish. When the beets, cream, and milk come to a boil in the oven, the cornstarch gelatinizes, thickening the sauce while also helping the beet slices stick together, just like in a fruit pie.

When the beets are sliced and layered in the baking vessel, re-heat the cream mixture before straining and pouring it over top. Ensuring that the milk and cream are piping hot before going into the oven cuts down on the total baking time.

The natural sugars in beets tend to caramelize easily, so covering the dish prevents the top layer from burning before the rest of the beets have cooked through. We also want some of the liquid to evaporate during cooking, reducing the cream and concentrating the beets' flavor. My solution is to cover the gratin with foil and pierce it with a knife or fork all over, allowing some steam to escape while still preventing the beets from burning during the long bake time. As the milk and cream reduce, the mixture breaks, forming creamy curds throughout the gratin. That may sound like an undesirable thing, but here it makes the gratin taste extra rich and cheesy—without adding any cheese.

The obvious pairing with beets are nutty and rich pistachios. They make many appearances together in salads and slaws, usually paired with funky goat cheese and bright citrus. It's a clichéd combo, but it's hard to shake because it works so well.

For the gratin, I add the pistachios in the form of a crunchy crumble on top, which I make by tossing toasted and salted pistachios with panko bread crumbs, sugar, and salt. Panko is lighter and flakier than regular bread crumbs, and helps to form a shattering crust on top, while the sugar helps make the topping extra crisp, caramelizing in the oven and coating the pistachios.The sweet-salty crunch of the buttery crumble give the earthy beets some moxie, adding texture and flavor.

Together, the vibrant and striking red and green colors add instant holiday flare to any dinner table, whether you're serving it with a dollop of crème fraîche as part of an elaborate holiday feast, or with a spoonful of Greek yogurt for a humble weeknight dinner. 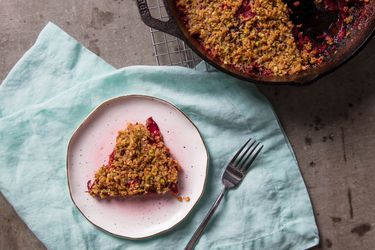 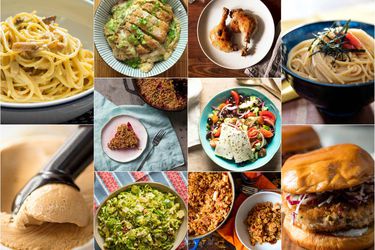 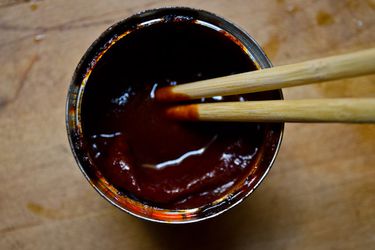