I’ve been making pizza for nearly 40 years, and after all that time I thought I had my dough formulas dialed-in. More than a decade ago I developed a recipe for a New York-style pizza dough for Cook’s Illustrated magazine, which was a big hit and served as the jumping-off point for dozens of subsequent pizza and flatbread recipes. While most of my pizza recipes are optimized for use in home ovens that can't exceed 550°F, I've baked them regularly in blazing hot wood-fired ovens, where they've worked wonderfully. That always made sense to me since, generally speaking, with all else being equal, the hotter and faster you cook a flatbread, the better it comes out, since the interior stays moist and tender while the exterior gets nicely browned and charred.

Which is why I was stumped when I started baking pies in an Ooni Koda tabletop outdoor gas oven—which easily achieves wood-fired-oven temperatures of 800-900˚F—and they kept burning before the toppings and underside were fully baked. I don’t mean that they charred, mind you. Charring—or leoparding, as the constellation of irregular dark-brown spots on the rim of a well-made pie are commonly referred to—is a good thing, adding welcome Maillard and caramelization flavor to the crust. What I'm talking about is more like incineration, where the rim would be solidly black and unpleasantly bitter in large swathes, oftentimes because they literally caught on fire as the pie baked.

At first I assumed that it was user error on my part, or a flaw in how my particular oven worked. But then I remembered all the other people making wonderful, not-burned pies in similar tabletop ovens on my Instagram feed. Which made me wonder: Why would my doughs bake beautifully in larger wood-fired ovens but burn in compact tabletop ones like my Ooni when they both heated to identical temperatures?

It didn’t take long to realize that the difference came down to only one thing: size. In a wood-fired oven, the fire is nestled in one corner of a wide, tall space, leaving loads of room for the pies to cook at a safe distance from it. In a tabletop oven, the pizza sits just inches from the fire, which means it's subjected to a ton of intense heat, with no place to go to escape from it.

Eliminate These Ingredients for High-Temperature Baking

To figure out what I was doing wrong, I decided to reach out to some of those tabletop pizza oven experts for advice. If they could make it work, then I needed to find out why straight from the source. Almost to a one, they told me this: Avoid adding anything to the dough beyond the four fundamental elements of any bread—flour, water, salt, and yeast—or the pies will burn.

Then it was obvious: That New York-style pizza dough recipe I mentioned above, the one that had launched countless others, was where I’d first gone astray. That’s because in addition to flour, water, salt, and yeast, it contains a few extra ingredients: sugar, oil, and—in later iterations and in several spin-off recipes—something called diastatic malt powder.

All three of these ingredients are essential components in a pizza dough that is meant to be cooked at a much lower temperature in a home oven, where pizza takes awhile—8 to 12 minutes or so—to brown, because:

But the combination of all three of these things is bad news when the pies cook in just 2 minutes: Sugar and diastatic malt both provide too much "food" for caramelization, and oil—in addition to its effect on tenderization—promotes heat transfer from the oven to the pie, speeding up browning all over again.

I ran a series of tests to confirm my suspicion. I made doughs with and without each of these ingredients, and in every case, the pies containing the “extra” elements were prone to burning before the toppings and/or underside were fully cooked. (I also timed how long it took each pie to cross the line between charred and burned, and the only one that lasted longer than 2 minutes was the one without all the add-ins.)

Once I ditched these amendments to my formula, the rest was easy, especially since there were only four ingredients to consider, and because the remainder of my pizza dough chops were solid:

Flour: I landed on a medium-high protein flour here, one like King Arthur all-purpose—with about 12% protein—instead of bread flours, which are closer to 13%. The protein percentage determines the amount of gluten that forms in a dough and thus the texture of the finished pizza. That's because without oil to tenderize the dough, high-protein bread flour produces a pizza that's a little tough. Reducing the protein slightly helped to restore the lost tenderness. (That said, if you don’t have access to King Arthur all-purpose, bread flour is the next best thing.)

Water: The percentage of water in a dough also has a profound effect upon the final texture of the pie, since water, like oil, also lubricates gluten. So more water is generally better if you want a tender, not-tough dough. But too much water can make a dough sticky and hard-to-handle, so there's a limit, especially if you're trying to create a formula that's easy for beginners and experts alike. I ended up with a 67% hydration dough (or 67g of water for every 100g of flour), a good compromise between ease of handling and maximum tenderness. One note: I actually prefer 70% hydration myself, though that dough can be a touch hard to handle. I offer instructions in the notes below if you want to increase the hydration once you're comfortable with this dough.

Yeast: Almost all of my pizza doughs are cold-fermented, meaning they spend at least a few days in the fridge before use (more on why below). Because of this I use a tiny amount of yeast—0.4%, or just 1/2 teaspoon for three to four pizzas worth—to avoid runaway fermentation.

Salt: Most breads, pizza included, contain between 1.5 to 2.5% salt; I like a high percentage of salt in my pizza doughs—2.2% in this case—as it ensures the crust has the robust flavor it needs to stand up to toppings that are (often) intensely flavored .

As for the mechanics of dough mixing, kneading, and the initial fermentation, it’s all pretty straightforward. You use a food processor to quickly mix the dough, minus the salt, and then you let it rest for 20 minutes. This step, known as an autolyse, helps passively develop gluten so that the dough doesn’t overheat during machine kneading. Then you add the salt and knead the dough in the machine until it’s well-developed, which takes about 30 seconds.

After that, you put the dough in a bowl and allow it to proof at room temperature until it's puffy, which takes about an hour or two, which gives fermentation a jumpstart before you divide the dough, shape it into balls, and move the balls into the fridge.

The Benefits of Cold Fermentation

Cold fermentation is a fundamental technique for dough-making for a few key reasons:

Flavor: Cold fermentation develops a complexity of flavor in the dough that a fast fermentation can't, thanks to the sorts of flavorful compounds that form only when a dough proofs at low temperatures. (At higher temperatures, those compounds get converted fully to carbon dioxide, the gas that gives bread lift.)

Easy Stretching: This slow fermentation gives the dough time to relax, which makes it easy to stretch out into a nice round disk without the dough fighting back. Not only does this help improve the look of your pies, it keeps them tender, because an overworked dough yields a tough, chewy pizza.

Convenience: While this method does require advanced planning, you can make pizza anytime within a 3-day window once the doughs are in the fridge, only an hour or two after you pull them out.

I strongly recommend that you cold-proof the dough in individual containers—like the 7-inch plastic takeout container pictured above—rather than side-by-side on a rimmed baking sheet. This helps to prevent the dough balls from kissing one another, which will make them hard to separate without tearing, but it also means you can handle each ball as gently as possible, which will help you to avoid overworking the dough before you shape it.

You can use this dough to make any kind of topped pizza you'd like, but I've also developed four recipes that specifically call for this dough, which you can find at the links below:

For best results, use a digital scale set in grams to measure ingredients. For the yeast, using a jeweler's scale will give you the most precise measurement possible.

If King Arthur all-purpose flour is unavailable, bread flour may be used in its place.

Once you are comfortable working with this dough, you can try increasing the hydration. I really like this dough at 70% hydration, but it's slightly more difficult to work with, and inexperienced pizza-makers may find that it's more prone to tearing during stretching. To increase the hydration to 70%, use 375g (13.2 ounces) of water in step 1 (an additional 25g).

The pizza dough needs to be made at least 24 hours ahead of baking. It can be refrigerated for up to 4 days, but 2 to 3 days is ideal. 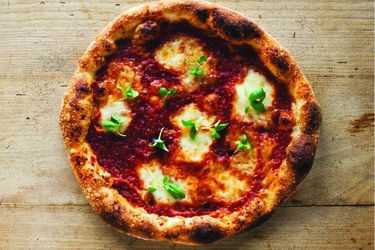