Deep-frying a turkey is a bit of an undertaking, but the result is a juicy bird with potato-chip-crisp skin.

How to Fry a Turkey Outdoors

Once the oil has reached its temperature, about 350°F, insert the hanger through the bird.

When it reaches an internal temperature of 145°F, it's ready. Let it rest for about 20 minutes before cutting into it.

How to Fry a Turkey Indoors 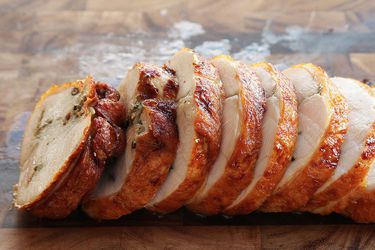