When thinking about how to organize this guide to American barbecue styles, I recalled how many ways you can cut a rack of ribs alone—not to mention pork shoulder, smoked sausage, beef brisket, sliced bologna, chopped mutton and every other type of meat that gets the low-and-slow barbecue treatment all over this country.

This is meant to be a general guide, not a restaurant directory. While it does include some shout-outs to specific smokehouses, you're better off picking up a copy of Vince Staten's Real Barbecue if you want a starter guide for your own pork-fueled pilgrimage.

Before getting into the regional breakdown, let's talk metrics of meat.

As a standard unit of barbecue, the sandwich tends to be a sensible serving at a low price. Pork, whether its chopped, pulled, or sliced, is the most iconic filling for a handheld barbecue sandwich. Little more than smoked meat on a simple bun, it's the food's most accessible vehicle. A good number of cooks add some kind of dressing (the most common being cole slaw). In fact, some of the most memorable sandwiches are those that perfectly balance fine-tuned variables of meat, sauce, slaw and bun.

Freestyle sandwiches really aren't sandwiches. They're sandwich-sized servings of barbecue with slices of soft white bread—what to do with that bread is up to you. I tend to use them as edible napkins.

The open-faced design of freestyle sandwiches make them a natural fit for ribs, sliced brisket, burnt ends, and pretty much anything that can't be served with an ice cream scoop. If you find yourself mulling over the brisket tray and the brisket sandwich, make sure, before committing, that the only difference is the unmarked loaf of prefab bread next to the register.

Riding the fence between takeout and sit-down, the barbecue plate (or tray) is meat without the bread distraction. Barbecue plates are not uniformly larger in serving size than their sandwiched sisters, but they are are often served with a side dish or two, and thus more of a full meal. It's not uncommon for regular smoke joints to offer small trays for $4 to $5.

In more upscale barbecue restaurants, the plate assumes the more conventional form of a full sit-down meal. One big upside is the quality of the side dishes—it's not uncommon for a smokehouse to serve great barbecue but terrible sides, which is usually unthinkable at a full-service restaurant.

A well-cooked rack of ribs is probably the most fun thing to eat in the world of barbecue. Pork spare ribs, the most inexpensive cut, are the most common. Many restaurants, including but not limited to those in St. Louis, Missouri, trim extra meat, bone and cartilage from their spare ribs to achieve the St. Louis Cut.

The seasoning and smoking of ribs vary significantly from region to region—from the sauceless salt-and-pepper ribs of central Texas to the heavily seasoned and sauced ribs of Kansas City. Different cuts of meat require different tacks in seasoning and slow-cooking, so the world of ribs is well worth exploring.

In locales that specialize in whole hog barbecue, ribs are sometimes cooked along with the rest of the animal, then removed from the carcass and sold separately. These pork ribs, essentially discarded meat at a discount, are quite different from the racks of ribs prepared to be their own dishes. That doesn't mean they're in less demand. The $5 sacks of rib meat taken from every hog at The Skylight Inn in Ayden, North Carolina, tend to disappear minutes after they're bagged.

Beef short ribs and lamb ribs are less prevalent in the U.S., but when done right, they can stand toe-to-toe with the best of their swine-based counterparts. They're also more common in barbecue brought into American borders from abroad. A good plate of Uzbeki lamb rib kebabs, for instance, is a sublime experience that can be experienced in certain New York neighborhoods, and good Korean beef galbi (grilled beef ribs) is practically a thing of legend wherever Korean-American communities take root.

Market Service, or Barbecue by the Pound

Known best in central Texas, where the barbecue evolved from German meat markets, market service is a natural extension of barbecue menus throughout the country. While seminal barbecue markets like Kreuz's and Smitty's in Lockhart, Texas, sell virtually everything on the basis of weight, it's quite common for smoke joints in all states to offer by-the-pound takeout as an option alongside sandwiches and plates.

Not all cuts of meat are sold by the pound. A thin slice of brisket, sure, but picking up half a hot link or a quarter-pound of smoked pork chop is not going to happen, even if you are still paying dollars on the pound. And though cheek meat is certainly a prize, I pity the fool who tries to order a half-pound of cow's head barbacoa.

In order to fully appreciate this variant of barbecue, you must procure a time machine—preferably one powered by the comedic force of your own bare feet. You must also have absolutely no qualms about eating an animal that bears an eerie resemblance to your family pet and household appliances.

UPDATE: Check back in December for the next installment of our barbecue style guide! 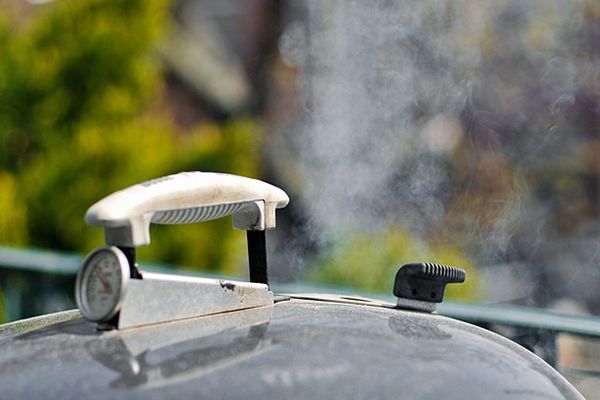