The jump from backyard to competition barbecue has brought with it an extreme challenge. I've learned to switch from cooking to my tastes to that of the judges. They are looking for a meat done to a defined standard, one with a sweeter flavor profile. It became clear in the first competition that my spicy slow-cooked racks, though second to none in my opinion, were not going to win.

Over the summer I put a big effort into relearning how to make ribs, this time to fit the criteria of judges.

While it was hard to turn against my spicy tastebuds toward a sweeter rib, it was easier to adapt my cooking method to get tender, smoky, and an all-around killer texture to racks of St. Louis-cut ribs. Of course, this meant a bit more than just simply throwing a few racks in the smoker and letting them go until done.

First, to develop a better crust, brush the racks with mustard before applying the rub. Then give them the normal low and slow treatment for three hours, with a misting of apple juice every hour or so to add sweetness, moisture, and aid in forming a beautiful bark. At that point, the racks are foiled with some apple juice and go back in the smoker to braise for another hour. This results in the most flavorful and tender meat, consistently. The ribs are then unwrapped and let smoke until they have a slight bend to them, about another hour or so.

After the ribs are sauced and set over a hot fire, let the racks rest in a pool of agave and brown sugar for a final sweet kick.

The end result is a perfectly cooked, beautiful sweet and smoky masterpiece, one that awarded us fourth place out of 50 teams at our final competition this summer.

On the competition trail, I've also been learning the mystique of barbecue, and while I'm happy to divulge this process, I'm taking the standard "secret" cop-out on the rub and sauces I've been developing.

Still, the rubs and sauces I've posted on the blog so far aren't far off from what I'm using in competition, plus it's great to have fun finding your own favorite rub/sauce combo. Hell, you have a long weekend to go wild with ribs, which just so happens to also be the best way to spend this holiday.

Happy grilling to all! 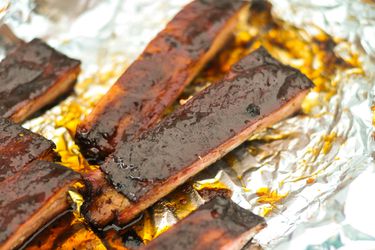 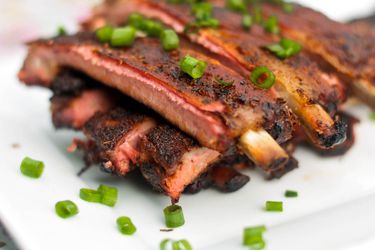