You can put just about anything between two slices of bread and call it a sandwich. But for hearty, satisfying, delicious sandwiches—and particularly those that don't have crutches like meat, cheese, and other animal products—you'll want to seek out ingredients with fatty richness and, for lack of a better term, meaty texture. Fortunately for you, we've got plenty of options that fit the bill—BLTs with creamy avocado, crispy fried mushroom po' boys, tofu banh mi, and more. Keep reading for 12 vegan sandwiches that show ham and cheese who's really boss.

It might seem foolish to try to vegan-ize a sandwich with "bacon" right there in the name, but we're always up for a challenge. The secret to our BLAT (aside from using the best summer tomatoes you can find) is our vegan bacon made with smoked King Oyster mushrooms. We also add avocado to the sandwich—BLT purists might scoff, but since we're using vegan bacon and mayo traditional is clearly not our first concern.

We fill these vegan banh mi with lemongrass-marinated tofu, which we cooked low and slow for maximum crispness. To complete the sandwich, we turn to pickled carrots, daikon, cilantro, cucumber, and jalapeños, plus vegan mayo and liquid aminos (which stand in for fish sauce). It's an intense sandwich, but if you want even more flavor spoon on a little homemade ginger-scallion oil.

Grilled tofu isn't your only choice for filling a vegan banh mi—here we turn to Japan for inspiration and stuff the sandwiches with tempura sweet potato. Frying the spuds gives the sandwich a great crunch and adds some fat, the lack of which often keeps vegan food from being totally satisfying to us.

Staying with the frier, this sandwich turns to crispy, cornmeal-breaded shiitakes in place of the fried seafood you typically find in a New Orleans po' boy. We top the sandwich with a tangy remoulade made with mayonnaise, mustard, lemon juice, hot sauce, scallions, parsley, and capers—don't worry, vegan mayo works perfectly well here.

Tortas are easy sandwiches to make vegan because—with toppings like refried beans, avocado, charred poblanos, and pickled jalapeño and red onion—who really needs meat? We don't want this sandwich to be all toppings, though, so we stuff it with a simple mix of mushrooms and spinach sautéed with garlic.

Get the recipe for Mexican Mushroom and Spinach Sandwich »

This sandwich uses the same toppings as the last one, but we pair them with panko-breaded fried eggplant. This would make for a delicious torta on its own, but it's even better pambazo-style, which means dousing the entire sandwich in red enchilada sauce and crisping it up in a panini press.

Get the recipe for Mexican Fried Eggplant Sandwich »

Forget about the sad hockey pucks you can buy in the freezer section of the supermarket—these are vegan burgers done right. Lentils, chickpeas, cashews, pine nuts, barley, and panko give the burgers a satisfyingly meaty texture; mushroom, leeks, and marmite crank up the savoriness, and puréed roasted eggplant keeps the patties moist. I know the ingredient list is a little intimidating, but it's worth it.

Get the recipe for Homemade Vegan Burgers That Don't Suck »

Protein-packed chickpeas are a great base for filling vegan meals. Here, we mashed them up with cooked bulgur wheat, cumin, and coriander, for the mixture into patties, then coat them in panko breadcrumbs and shallow-fry. Serve the patties on potato buns (Martin's is not vegan, but Arnold Select is) with a tahini-dressed slaw.

Get the recipe for Crispy Fried Chickpea Cake and Slaw Sandwiches »

Our chickpea cakes bear more than a passing resemblance to falafel, so we couldn't leave you without that recipe. Most falafel is dry or heavy—the secret to making them perfectly light and crisp is to start with dry chickpeas so that you don't have to use a binder. Serve them in a pita sandwich with tahini and hot sauce if you're so inclined.

No one likes a dry sandwich, so we keep this one plenty moist by filling it with sautéed mushrooms, caramelized onions, and sun-dried tomato mayonnaise (made with homemade or store-bought vegan mayo). We build the sandwiches on ciabatta and crisp them up in a panini press for textural contrast.

It's virtually impossible to fully recreate the magic of a muffuletta without meat and cheese. Fortunately, you can make a sandwich that is delicious in its own right by pairing the classic olive salad with braised broccoli rabe, roasted red peppers, marinated artichoke hearts, and sun-dried tomatoes. If you have access to muffuletta bread where you live you're luckier than I am, but if not, you can get by with a seeded Italian loaf.

This messy sandwich is stuffed with sumac-marinated red onion and braised kale that we let simmer for about half an hour until it's totally tender and the braising liquid has thickened into a sauce. You can use any sandwich bread you'd like here, but I'd recommend trying pizza bianca—untopped pizza sold as street food in Rome. 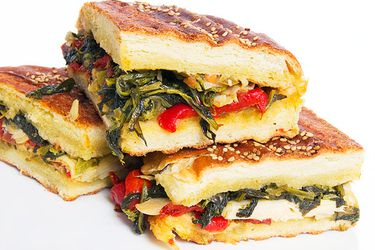