The best banana bread, classic banana pudding, and more banana recipes to prove that this fruit is good for more than snacking.

Bananas often don't get the love they deserve in the kitchen. Usually eaten alone as snacks or sliced over cereal, they can quickly overripen, at which point they're good mostly for smoothies or banana bread. Don't get us wrong—we love a good banana bread (and have a stellar recipe to share with you below)—but with its mild and sweet tropical flavor and rich texture, a banana is capable of so much more, whether it's topping oatmeal or pancakes or baked into a cake. Keep reading for 19 of our favorite banana recipes.

While you're probably used to cooking your oatmeal on the stovetop, the oven is a great hands-off alternative. Here, we flavor baked oatmeal with banana, sweet maple syrup, and crunchy walnuts. If you want to keep the sweetness muted, simply start out with a little less syrup—you can always drizzle on more later.

Get the recipe for Maple-Banana Baked Oatmeal »

A bowl of oatmeal isn't typically thought of as an exciting breakfast, but this recipe proves it's all in how you dress it up. A bananas Foster–inspired topping of sliced bananas and walnuts glazed with brown sugar and butter, plus a spoonful of peanut butter to thicken the oatmeal, a little orange zest, and a dusting of cinnamon and nutmeg, makes this oatmeal fancy enough for a special occasion. We kept this recipe alcohol-free, but if you want to sneak in a couple splashes of rum, who are we to tell?

Another bananas Foster–inspired breakfast, this one doesn't skip the rum—hey, if you're going to make a showstopping breakfast, you might as well go all the way. Choose a hearty white bread that's capable of standing up to the milk and eggs; its mild flavor also won't overpower the bananas.

Get the recipe for Bananas Foster French Toast »

Adding bananas to baked goods gives them a wonderfully light, fluffy texture. We pair mashed bananas with rice flour to make these gluten-free pancakes—totally delicious on their own but made extra special when topped with sliced bananas, blueberries, chocolate chips, or chopped nuts. Even people who don't love bananas should give them a try, since the flavor of the fruit here is subtle.

Get the recipe for Gluten-Free Banana Pancakes »

Just because fruit salads often are a little on the boring side doesn't mean they have to be. Like any good salad, fruit salad is at its best when packed with lots of different flavors and textures. Here, that means a combination of juicy plums, creamy bananas, crunchy pecans, chewy dates, fragrant tarragon, and a sweet-and-smoky dressing made with maple syrup and bacon fat. Try this dish spooned on top of yogurt or brown-butter waffles.

Get the recipe for Plum, Date, Banana, and Maple-Bacon Salad »

I'll scarf up even mediocre banana bread, but this recipe will elevate your results from good to great, with a few simple tricks like using toasted sugar instead of regular white, adding oat flour to thicken the batter and Greek yogurt for tenderness, and spicing with nutmeg and clove. Though banana bread is often turned to as a way to use up overripe bananas, we've found that fruit that's just fully ripe but not blackened will give the bread a lighter, fluffier texture.

Get the recipe for Classic Banana Bread »

Hummingbird cake, a Southern dessert usually served as a towering layer cake, has a similar look and feel to carrot cake, but the moist crumb is flavored with pineapple and banana instead of carrots. For ours, we blend the banana with fresh (not canned) pineapple to maximize flavor—and we make it easy by baking it in a single layer in a cast iron skillet.

Get the recipe for Hummingbird Skillet Cake »

These cookies are inspired by Elvis's favorite duo: peanut butter and bananas. We mix peanut butter chips and chocolate chips into an oatmeal and banana base to make a mildly sweet treat that tastes a bit like breakfast in cookie form.

Speaking of peanut butter and banana—a truly winning combination even if you're not the King—the same pairing is behind this surprisingly easy pie, filled with a light and creamy peanut butter mousse and ringed by sliced bananas and dollops of whipped cream. The genius, though, is in the crust, which is made with crushed Cracklin' Oat Bran cereal for a hearty, crumbly contrast to the airy filling. If you want to go full Elvis, try garnishing the pie with bits of candied bacon.

Get the recipe for Peanut Butter and Banana Pie »

There's just something about the combination of sweet vanilla pudding, crunchy-made-soft Nilla Wafers, and creamy banana that makes for pure comfort food. This recipe is fairly classic, using store-bought cookies and boxed vanilla pudding mix, but we make the pudding with sweetened condensed milk and fold whipped cream into it. Personally, I always buy an extra box of Nilla Wafers when I make this recipe, since half of the cookies tend to disappear into my stomach while I'm at it.

Get the recipe for Banana Pudding »

This luscious variation on a classic banana cream pie keeps the sweetness in check with a healthy dose of bittersweet chocolate and a chocolate wafer crust. That kind of chocolatiness can stand up to lots of bananas, so we layer two sliced fruits on the bottom of the pie and two more on top for garnish.

Get the recipe for Creamy Chocolate Banana Dream Pie »

A mixture of coconut oil and full-fat coconut milk can give any vegan ice cream a wonderfully rich texture. Rather than try to downplay the tropical flavor they impart, here we emphasize it, using virgin oil for a more intense coconut flavor and pairing it with bananas and dark rum. You'll want to use very ripe bananas here—their high pectin content will make the ice cream extra thick.

Get the recipe for Vegan Banana Coconut Ice Cream »

This recipe starts with a simple ice cream base that's made with caramelized bananas in place of eggs, which, though you could eat it just as it is, is made even better when sandwiched between our Peanut Butter Oat Cookies. Cake flour, a generous dose of brown sugar, and more eggs than you might expect produce an especially soft texture in the cookies, which prevents the ice cream from falling out as easily.

Get the recipe for Banana Peanut Butter Ice Cream Sandwiches »

This super-simple campfire dessert is made by splitting open bananas, stuffing them with candy, and grilling until melted. Our recipe calls for mini marshmallows, chocolate chips, and peanut butter chips, but that's just for inspiration—you can use whatever meltable sweets you'd like. The best thing to do is lay out a spread of toppings and let each eater assemble their own masterpiece.

Get the recipe for Grilled Banana Boats With Peanut Butter, Chocolate, and Marshmallows »

There's more to bananas than just dessert: Banana ketchup is a Filipino condiment invented after World War II, when a tomato shortage forced people to get creative. Traditional banana ketchup is little more than bananas, sugar, and vinegar, but our recipe adds complexity with jalapeño, rum, and spices like ginger, turmeric, and allspice.

Get the recipe for Banana Ketchup »

This smoothie makes the boozy Puerto Rican holiday punch coquito breakfast-friendly by replacing the liquor with caramelly maple syrup. The richness of the smoothie comes from frozen bananas and coconut milk—make sure to find coconut milk from a carton, which is rich and flavorful and isn't prone to separating when chilled, like the canned variety.

Get the recipe for Coquito Smoothie »

Basically a chocolate-dipped banana in a glass, this smoothie combines bananas and milk with raw pecans, cocoa nibs, and Nutella, plus a sprinkle of sea salt to bring out the flavors. This recipe as is makes a very thick smoothie, but feel free to add more milk to thin it out if you prefer.

Can't open your eyes in the morning without a jolt of caffeine? This hazelnut-banana smoothie is spiked with just enough coffee to get you going. The hazelnuts aren't just for flavor; they're also filling enough to give you a little (non-caffeinated) energy boost for the day ahead. A sprinkling of coconut flakes is a nice touch that brings the drink together.

Get the recipe for Coffee, Banana, and Hazelnut Morning Shake »

Matcha and banana might sound like an odd combination, but the grassy green tea powder adds a subtle umami hit that balances the sweetness of the fruit without clashing. Make the drink with unsweetened soy milk, and add agave nectar to taste so that the sweetness is just right. 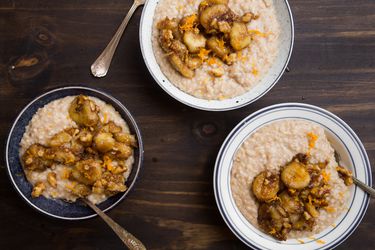 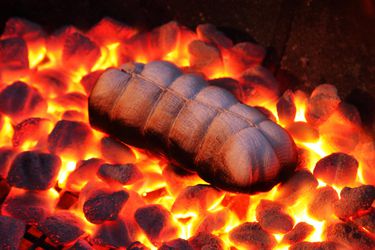