A party without cheese is like Valentine's Day without chocolate, and, while a well-curated cheese plate will likely do the job for any occasion, a wheel of baked brie will deliver maximum impact with a minimum of effort. Especially at a winter party, it can turn the standard cheese board into a highlight of a gathering: a warm, gooey communal comfort food.

Making a baked brie (or a baked camembert, brie's slightly more intense soft-rind cousin, or anything in this small format, soft-ripened category) can be as simple as tossing the cheese in the oven with some kind of drizzled topping, or you can go all out by serving it en croûte—wrapping it up in puff pastry with any number of store-bought or homemade sweet condiments.

There's a lot of variation among the cheeses that are generally available in American grocery stores, and you may have access to fancy imported brands, or a "traditional handmade brie" that promises complex flavor and aroma along with a gooey texture. But honestly, you don't have to spend big bucks on a brie wheel that's going to be heated up and served as a casual party snack. Those complex flavors will end up lost—it's like using a really good bottle of wine to make sangria.

A common complaint with baked brie is that the wheel fails to melt, or even ends up rubbery. When baking brie, remembering a few key things will encourage good melting.

The first is to score or remove some of the top rind. Your brie or camembert wheel comes in a bloomy rind, which, while perfectly edible, can vary in thickness and texture from one wheel to the next. When you cut through that rind, the interior of the cheese can get better exposure to the heat, and air can escape in a controlled manner. That's a good thing, since you don't want your cheese to explode in the oven: De brie would go everywhere. (I'm sorry. I'm so sorry.)

Second, don't overcook the brie. Twenty to 25 minutes in a 350°F (180°C) oven without the puff pastry crust, or up to 35 minutes with it, should be enough to heat the cheese through. In fact, overcooking it, especially if you haven't cut the rind, may actually re-harden the cheese and make it tough and unappetizing.

But here's our main tip: For the gooiest, meltiest baked cheese, look for wheels labeled "triple-cream." Triple-cream cheese (or fromage triple-crème, for you fancy folks) is cheese that contains more than 75% butterfat in the dry matter. (Double-creams must contain between 60 and 74% butterfat.) Extra cream is added to these cheeses before the curd is formed. In triple-creams, this means roughly 40% fat overall, similar to the percentage of fat in heavy cream. Butterfat melts at a relatively low temperature (90 to 95°F/32 to 35°C), so, even with the stabilizers present in most imported bloomy rind cheeses at the supermarket, a triple-cream will turn liquid and gooey when heated.

While the term "triple-cream" may sound ultra-decadent, these rich, buttery cheeses are not quite as fattening as you might think. Fat content in cheese is measured in parts per dry matter, and since so much of a soft cheese is actually water weight, the fat solids are significantly less than in a hard cheese, like cheddar. Ounce for ounce, triple-cream brie is actually less fattening than the same weight of an aged Gruyère, due entirely to moisture content.

Baking your brie en croûte is the simplest way to up your baked brie game. There's something about a well-baked puff pastry crust that screams "comfort food." Frankly, I think you could bake a shoe in puff pastry and it would turn out great, but the technique works especially well with a soft, gooey cheese.

With all of that in mind, here is a decadent baked brie with figs and thyme. We made a few other variations too: one with honey and pistachios and another featuring apple and pear compote in a pastry crust.

You do need to take a little care with this technique, so as not to create any gaps that might allow melting cheese to escape, but don't get too fussy with it. Start with a sheet of thawed pastry and roll it out to a square, giving yourself enough of a border around the cheese to wrap over the top. Fold the edges in, making a bulb of pastry at the very top. You can tie this with string if you like.

Brush the pastry all over the top and sides with a wash of one egg beaten with a tablespoon of water—this will give you a gorgeous brown color when it's baked. If you're not using string, you can seal the flaps under, then use the egg wash to glue them down.

The creaminess of these cheeses benefits from an accompaniment that balances them out with both sweetness and acidity. We like jams from fruit that naturally have less sugar and more complex flavors. Our version uses fig jam, but quince and apricot, for example, would also work very nicely. A sweet berry jam would push this too deep into dessert territory for our taste, but cranberry should pair well. You could even use a pepper jam to give it a spicy, savory twist.

All of these should be served warm out of the oven, though it's important to wait about five minutes to let the brie settle before cutting it open. Serve your gooey, cheesy creation with crackers, warm baguette slices, or crudités (we really like sliced apples). Whichever recipe you go with, you'll make your party guests happy, and, after all, isn't that what it's all about?

If possible, use a triple-cream bloomy rind cheese, which has a higher fat content than a double-cream cheese and melts better. 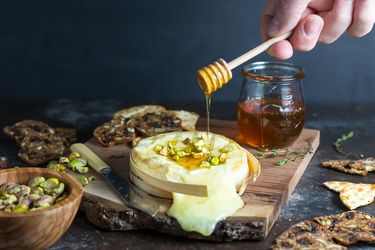 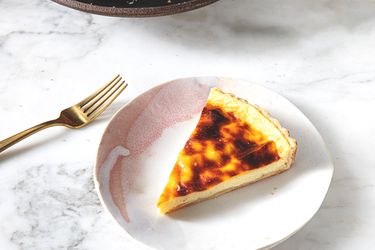