A supremely gooey and cheesy mac and cheese gets a healthy hit of savory smoke and spicy chile heat.

The only real extra step is incorporating the bacon and jalapeños. I started by frying diced bacon in a skillet until it was completely crisp, then I added some diced jalapeños off-heat. I started off with straight-up fresh green jalapeños, but found that a mixture of fresh red jalapeños (Fresno chiles or plain green jalapeños will also work fine) and some diced pickled jalapeños offered brighter flavor, along with a pleasing acidity. After adding the chiles, I used some of the liquid they gave off to scrape up browned bits of bacon from the bottom of the skillet.

Once that mixture was concocted, I cooked my pasta by barely covering it with lightly salted water and bringing it to a boil (a much faster and more effective way to cook pasta than boiling it in a huge volume). Meanwhile, I mixed together my evaporated milk and eggs and tossed my cheeses with cornstarch.

My standard recipe calls for quite a bit of butter to be added to the noodles after cooking, but here I replaced a good chunk of that butter with the rendered bacon fat from the skillet, which gives the entire dish a smoky aroma, even when you aren't getting any of the individual bits of crispy bacon in your mouth.

To reheat the pasta, add a few tablespoons of milk to the pan and cook, stirring gently, over medium-low heat until hot. 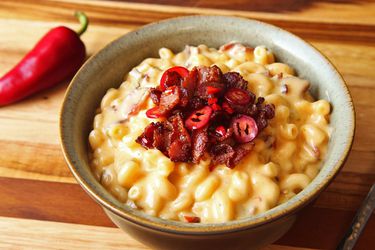