For the best braised baccalà, make your own salt cod.

The winter holiday season in Italy is also prime baccalà season. In Central and Southern Italy, salt cod features heavily on Christmas Eve menus—you can find it battered and fried as an appetizer, flaked and tossed with potatoes and onion as a salad, simmered into a tomato sauce for pasta, or, in this case, braised in large fillets as a secondo. In Livorno, a seaside town in Tuscany, baccalà is traditionally braised with tomato and potato for a hearty main course. In Southern Italy, you’re more likely to find it cooked in a briny tomato sauce with capers and olives, in the same style as swordfish alla ghiotta.

Marrying salt cod with salted capers and brined olives may sound like trouble. As I found out during recipe development, the dish can easily become an inedible salt bomb. Round after round of testing with store-bought baccalà yielded inconsistent results. Even when I stretched out the soaking time for the salt cod to four days, I couldn’t account for differences in salinity levels between salt cod producers; one batch would turn out perfectly and another, soaked for the same amount of time, would be a disaster.

For most recipes, slight differences in salt levels don’t end up being that noticeable. The intensity of salt cod in a brandade, for example, is tempered by potato and dairy. But in baccalà alla napoletana, there’s no wiggle room. I was also running into problems with the pieces of cod themselves. This dish is meant to feature meaty, thick portions of baccalà, but here in the US, shoppers rarely have a say about the size of the pieces they purchase, and often end up with thin scraps from the tail or belly. That wasn’t going to work. In need of a solution, Daniel suggested that I just make salt cod myself.

Curing often sounds like a daunting project, but salt-curing fish is remarkably easy, and it doesn’t get much simpler than salt cod. To be clear, the goal for making baccalà for this recipe wasn’t to produce a facsimile of traditional, fully dried salt cod that can be stored for months. Instead, I wanted to cure cod long enough to deeply season and firm up the flesh, transforming it from soft to silky with a slight chew. In his cookbook My Portugal, Chef George Mendes provides a simple method for curing salt cod that gave me just the results I was looking for.

I pack thick cod fillets in kosher salt in a baking dish and refrigerate them for two days, redistributing salt as needed to keep the fish completely covered (the fillets absorb a lot of salt during the first 12 hours). I then rinse the cod and soak it in water for another two days, to tone down the saltiness of the fish. During testing, I experimented with shorter curing and soaking times, hoping that I could find a way to cut down on the total time for this process, but a shorter cure produced cod that was still too delicate to be called baccalà, and a shorter soaking time just produced overly salty fish. However, the four-day process is well worth it: When I ran side by side tests of baccalà alla napoletana made with my cured cod going up against the store-bought stuff, the homemade cod blew the regular baccalà out of the water (or tomato sauce).

The thick fillets are firm, with just the right amount of chew on the surface that gives way to a silky interior. With the texture right where I wanted it, I was able to do away with the flouring and pan-frying step that's traditionally used to give the baccalà a light crust and move right on to nestling the cured fillets into the puttanesca-like sauce, finishing them in the oven until just cooked through. This is a one-pan recipe that’s also a perfect centerpiece for a festive meal.

While we prefer the more delicate texture and salinity of homemade thick-cut salt cod fillets for this recipe, it can also be made with store-bought salt cod. Use 1 pound (455g) salt cod fillets, ideally thick, center-cut pieces. Rinse the cod and soak in water in a large container, changing the water every 12 hours, for 4 days. Cut cod into equal portions and proceed with step 3 of the recipe.

The salt cod needs to be started four days before you plan to serve the dish. The finished dish is best enjoyed right away, but leftovers can be refrigerated in an airtight container for up to 2 days. Reheat gently before serving. 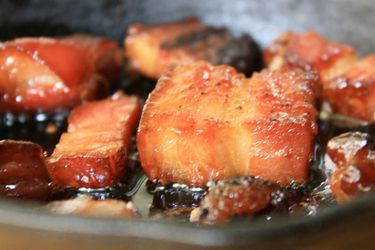