A classic lemon-and-egg thickener in a tangy chicken soup.

Greece has given us an impressive cast of mythical hybrid creatures. There's the Minotaur, with its body of a man and head of a bull; Pegasus, the great winged horse; centaurs, those impressive human torsos that trotted around on horses' legs; and, of course, the Avogolemono—that strange little creature whose name translates in English to the "Egg-Lemon."

According to legend, the Avgolemono was a stalker of Grecian kitchens, and soup and saucepans in particular, where it would quietly slip into broths and sauces, instantly unleashing its magical powers, turning watery liquids thick and creamy and adding a blast of tart and punchy citric sunshine to otherwise ho-hum flavors.

Of course, I'm just kidding. Avgolemono wasn't a mythological beast at all. It's a very real mixture of eggs and lemon juice, used by real cooks in real kitchens throughout Greece to thicken and flavor broths and sauces. It also isn't just a Greek thing—these kinds of lemon-and-egg mixtures are common throughout the Mediterranean under a variety of names, possibly spread around the region by Sephardic Jews after they had been expelled from Spain in 1492 (they used a similar egg-lemon mixture called agristada).

One of the main points of confusion about "avgolemono" has to do with the way the word is used. In the United States, it has become practically synonymous with a very specific preparation of chicken soup that's thickened and flavored with an egg-lemon mixture, which is the recipe I'm sharing here. But in Greece, "avgolemono" describes the mixture of lemon and egg alone, and not any particular dish in which it's used. This mixture is then added to a wide range of sauces for meats and vegetables, and soups beyond just chicken.

The funny thing, though, is that avgolemono really doesn't need to be a hybrid at all; at least, not in terms of how it's used in a recipe. One could just as easily add the lemon juice and eggs separately. In fact, I think there's a strong case to be made that that's often the best way to do it.

One of the first things I noticed when surveying avgolemono chicken soup recipes was the incredibly wide range of ratios they called for. For one quart of broth, recipes specified anywhere from two to three eggs and two to 10 tablespoons of lemon juice—that's five times as much lemon at the high end of the range as at the low end. There were other important differences, too. Some recipes said to separate the yolks from the whites, beat the whites until stiff, and then fold the yolks and lemon juice back into that (I don't recommend this, the result is unfortunately foamy). Others simply had you blend whole eggs and lemon juice together. And yet others didn't use whole eggs alone, but instead required just one or two yolks along with several more whites (a little fussy for me, but something you can choose to explore if whole eggs yield too rich of a result for your palate).

After talking to a few different native Greek friends, what became clear was that those varying ingredient ratios weren't a sign of an abundance of bad recipes, though some of them may have been bad, but instead a reflection of just how subjective the "right" amount of lemon and egg should be in any given recipe. Talk to even a few Greeks and you realize that how thick and lemony a dish should be is not at all a settled question.

The problem, then, with writing a recipe where the lemon and egg are blended together first and mixed into the broth together is that it ties them to each other. You will get a soup or sauce that is just as thick and as lemony as that mixture will make them. Of course you can always add more lemon juice if you think there isn't enough, but you can't take away what's already there.

There's really no technical reason, from a cooking perspective, that the lemon and egg need to be mixed with each other before being added to the pot. You can just as easily thicken the soup first with beaten egg, tempering it in to avoid scrambling the eggs (see video below for more on how tempering works), and then add the lemon juice to taste. Doing this gives you much more control over the dish's results. In my recipe, I add just a small amount of lemon juice to the eggs to start it off, and then leave it up to you whether or not to add extra lemon juice according to your own tastes.

The rest of the recipe is simple as can be. Start with good chicken soup or stock, and cook some rice or orzo in it until tender. Pieces of poached or sous-vide chicken meat can be added, if desired. Then temper in the eggs and cook gently until the soup has thickened. Finish with lemon juice to taste, garnish with herbs, and you're done.

Obviously, once you've settled on your own perfect amount of egg and lemon, you can add them all at once using the hybrid method, if that seems easier to you. But you don't have to.

If you want, you can use two quarts of a basic chicken soup with the meat already in it, but without the finishing aromatics like carrot and celery. Simply thicken as described in the recipe with eggs, then flavor with lemon and finish with dill. 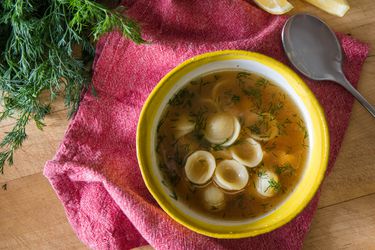 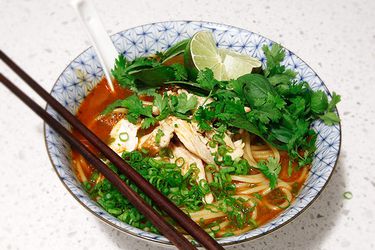 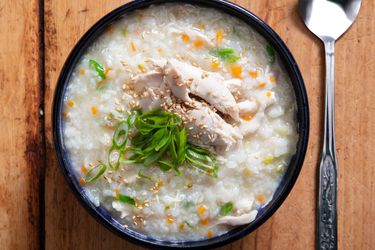 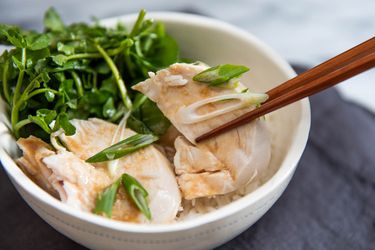