Our guide on how to reuse fry oil, and prolong its life.

How Many Times Can I Reuse Fry Oil?

I wanted to ask you today about reusing deep-fry oil. How many times can you keep reusing it until it goes bad? I remember you writing in your Wok Skills post that you can reuse oil until it becomes dark and somewhat bubbly. However, a popular Japanese TV show reported that a katsu made with old oil tasted superior to katsu made with new oil. I also read that many tempura places use a mix of old oil and new oil, which people claim adds a bit more flavor and color in comparison to using solely new oil.

Whenever I post a recipe that involves deep frying, I receive a string of emails or comments asking me what to do with all the leftover oil after you've fried something. It's a good question—nobody wants to throw out $10 worth of expensive peanut oil just to make a single batch of french fries.

Good News A: You don't have to throw out used oil. Often you can reuse it many, many times!

Bad News: There's no hard and fast rule for how many time you can reuse that oil. Distrust any source that gives a firm answer on the number times you can reuse oil.

Good News B: It's easy to tell when you'll need to replace your oil, and more importantly, there are some great steps you can take to increase the useful lifespan of your oil!

Let's take a quick look at how deep-frying works before we go on.

Deep frying accomplishes two goals. First and foremost, it dehydrates foods. As soon as the food hits the hot oil, it begins to bubble. These bubbles are pockets of water that are suddenly vaporizing and jumping out of the food, heading up through the oil, and escaping into the atmosphere. The hotter you fry, the more vigorously these bubbles jump out, and the faster your food becomes crisp.

At the same time, the Maillard reaction is occuring: proteins and carbohydrates are breaking down and recombining to produce the browned colors and flavors that we associate with well-fried foods.

In order to prevent foods from becoming tough and stringy as they fry, most often fried foods are first coated with a protective insulating layer of batter or breading. This gives us the best of both worlds: tender, steamed food in the middle with a crisp, browned, bubbly layer of crispness on the exterior.

Incidentally, the folk wisdom that oil that's too cool will cause foods to absorb more oil is bunk. In fact, because oil tends to move into spaces that were formerly occupied by water, the amount of oil a piece of fried food absorbs is directly related to the amount of moisture that is driven off, which in turn is directly related to the temperature you cook at, and the temperature to which you cook your food to. The hotter you fry, the more oil food will absorb.

The perception of greasiness is what increases with lower frying temperatures. Why? Because soggy fried foods that contain a mixture of oil and leftover water in their crust taste soft and greasy on the palate, even though the actual amount of oil they contain is lower than that of properly fried food.

What About Oil Freshness?

Does oil freshness really affect its ability to fry, and if so, how and why?

Oil's freshness largely affects its hydrophobic nature. We all know that oil and water don't want to mix, and this is one of the reasons deep frying works so effectively. You can submerge a piece of food in a pot of hot oil and not much oil will get absorbed—at least, not until enough moisture has been driven out of the food.

The more oil breaks down, the less hydrophobic it becomes. At first, this can actually be an advantage. Less hydrophobic molecules in your oil means that it can come into closer contact with foods, allowing them to fry just a bit more efficiently. This is where the wisdom of those tempura chefs comes in—adding a bit of degraded, old fry oil to the new batch will improve it.

Eventually, as this breakdown continues, your oil becomes less and less hydrophobic, and eventually it'll start entering your food too rapidly, causing it to turn greasy and ruining its crispness.

At this stage, your oil needs to be replaced. Some telltale signs of old oil is foam on the top surface, an inability to reach frying temperatures without smoking, and a dark, dirty look and musty, fishy aroma.

The rate at which your oil will reach this stage depends on a number of factors. Let's talk about those.

Things That Will Ruin Your Oil

So what factors will affect the number of times you can reuse your oil?

The Type of Frying Vessel

With a home setup, on the other hand, you end up frying in a pot or a wok placed over a burner. Particles of food fall to the bottom of the pan, coming in direct contact with a heat source and burning, imparting their flavor to the oil and hastening its breakdown.

Unfortunately, there's no real way to avoid this unless you decide to purchase a dedicated electric deep fryer for your home kitchen. If you fry a lot, this is not a bad idea.

The Type of Coating

Basic rule of thumb: the more particulate matter you introduce to oil and the finer those particles, the faster your oil will break down. Battered foods like onion rings or bare foods like french fries will leave behind very little detritus after they're done frying. Breaded foods like chicken cutlets will leave crumbs that fall off when the food is added to the oil. And foods dredged in flour like these Fried Fish Sandwiches will introduce a ton of particles.

So while oil in which you are cooking battered foods may last through a dozen or more batches, oil used for flour-dredged foods may break down after only three to four uses.

The Type of Food Being Fried

With battered and breaded foods, what's inside doesn't matter all that much as it doesn't come into direct contact with the oil. But for foods that are fried bare, the type of food can affect the overall quality of the oil. Vegetables tend to dry the cleanest, imparting very little to the oil. On the other hand, fatty meats like chicken wings or bacon will render fat as they cook. This fat can then mix with your fryer oil, causing it to break down a little faster.

The Type of Oil and the Temperature

Different oils have different makeups in terms of their relative levels of saturated and unsaturated fats and other solids. This can affect the way they fry and the temperatures to which they can be heated. Generally, refined oils like most peanut, canola, vegetable, and corn can be heated to higher temperatures than raw oils like extra-virgin olive oil or most sesame oil. It's not that you can't fry in extra-virgin olive oil, it's just that it will break down far faster than a refined oil—if it can even get hot enough to fry without smoking in the first place.

The best oils for frying tend to be those high in saturated fats, such as peanut oil, vegetable shortening, or lard. They'll not only have the longest lifespan, but they'll also produce the crispest results.

Oil can break down even without the energy of a burner underneath it. Its largest enemies? Humidity, light, and heat. You all have at least one friend who stores their oil right above the stove, or perhaps even sitting in a bottle against the backsplash. They are no-good, dirty rotten oil-killers and I urge you to de-friend them immediately.

Oils—even those that have been used a few times—should all be kept in tightly sealed containers in a cool, dark place.

How to Clean Oil

So you've cooked off that batch of fries, now you want to store the oil for future use. How do you do that?

Start by using a skimmer to skim off any floaters and large pieces of debris that might be lurking in the pot and discard them. Next, pour the oil through a fine mesh strainer into a clean, dry pot. If you were cooking flour-dredged foods, you may find a large layer of dirty, flour-filled oil at the bottom of the pot. Stop pouring before you pour this stuff through and discard it separately. Cover the pot with the strained oil to prevent dust from falling int, and let it cool completely. Finally, use a funnel to pour the oil back into its original container (you did save it, right?). Seal it tightly, and store the oil in a cool, dry place.

UPDATE: If you have some gelatin on hand, you can also give this gelatin-clarification technique a shot. It works like a charm and gives you crystal clear oil overnight.

Three Ways to Increase the Lifespan of Your Oil

Of course, even with all these tips, there are a crazy number of variables out there that can affect your oil. Your best bet for knowing when to toss the oil and when to reuse it is your own senses. Is it foamy? Does it smell rancid? Ditch it. Otherwise, just strain, store, and you're good to go for the next fry-up. 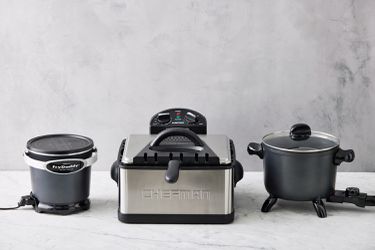 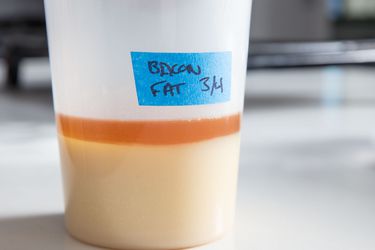