Do I Need To Preheat My Oil? | Ask The Food Lab

Do I Need To Preheat My Oil?

"A lot of recipes instruct you to heat oil to a certain point (till shimmering, smoking, or just an unspecified 'Heat oil over medium heat') before adding the first ingredient, say onions. Does it matter if you wait for the oil to heat, or could you just as well throw the other ingredients in with the cold oil?"

The answer is: it depends.

There are two reasons you'd want to heat your oil. The first is that it can prevent foods from sticking.

See, raw proteins can interact with metal on an actual molecular level. It doesn't just stick by "getting stuck in the pores and microscopic cracks" as some people hypothesize. Even on a perfectly smooth, polished surface with no cracks/imperfections whatsoever, meat will still stick as proteins form molecular bonds with the metal.

How does preheating prevent this? The thing is, only raw proteins will form this bond. Heat causes proteins to fold in on themselves, or even to break down and form all new compounds. Once in their folded or rearranged form, they no longer stick. So the goal is to get the meat to cook before it even comes into contact with the metal by heating oil hot enough that it can cook the meat in the time it takes for it to pass from the air, through the film of oil, and into the pan.

With a hot enough pan and the right material, just the heat of the air and the radiant heat of the pan itself will be enough to do this, but the oil helps. Another alternative would be to pre-sear meats by, say, hitting them with a blowtorch before adding them to a skillet.

That's why most recipes that call for searing meat will advise you to heat the oil in the pan to the point where it starts shimmering or even lightly smoking.

The second effect that preheating has on oil is that it alters the way in which heat travels through the ingredient being cooked. Basically, the hotter the pan, the larger the temperature differential will be between the outer layers of the ingredient and the center. So controlling the starting temperature of your oil can help you control the final product.

For example, with a steak, you want the exterior to be blasted by heat in order to precipitate the Maillard reactions—the series of chemical reactions that cause meat to brown and develop flavors—so you want to get your pan and oil as hot as possible before adding it.

On the other hand, if you want to, say, soften up some onions or garlic without browning them, you don't want to preheat the oil too much or you'll end up caramelizing or burning the exterior of the onion pieces before they get a chance to soften and cook through.

You may be asking why you can't preheat the pan, then add the oil, and the answer is that you can, technically. The problem is that without oil in it, it's very difficult to determine how hot a pan actually is. Starting with oil in the pan is a good indicator of how hot the pan is. We know that shimmering oil is hotter than pooled oil (it starts shimmering at around 300 to 400°F), while smoking oil is hotter still (depending on the type of oil, this begins at around 450 to 500°F). The oil is a built-in temperature indicator.

There are times when it's perfectly fine to start with both your oil and your other ingredients in a pan before you ever even apply heat, specifically when the food being cooked is unlikely to stick, and a slow, even cook is what you are looking for. Sautéed onions are a prime example of this. Even when a recipe suggests heating the oil first, you can rest assured that you probably won't taste any difference in the end. 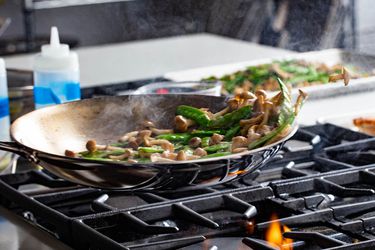 All-Clad Skillet vs. Tramontina Fry Pan: Which is Better? 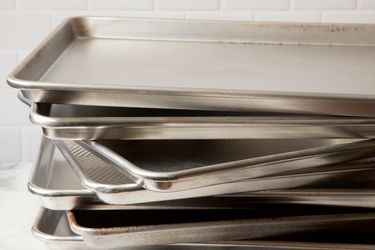 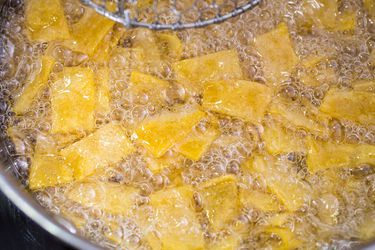