Do Bones Add Flavor to Meat? | Ask The Food Lab

"Do bones add flavor to meat?"

I was wondering about cooking meats without removing bones. Does the added flavor that everyone raves about come from marrow? Is the flavor bonus more from keeping the cut whole? Are the areas closest to the bone the only that benefit? Or is this one of those cooking rules that isn't completely correct?

You hear it all the time. Grill that steak with the bone in. Buy a bone-in roast. Chefs and cookbook authors alike all say it, claiming that the bones will add flavor to your meat. I was skeptical (as I often am), so a few years ago I ran a series of tests to determine whether there was anything to the flavor claims, as well as whether or not there might be other non-flavor-related advantages to cooking with bone-in meat. We'll get to the results in a moment, but first, let's talk about what bones are made of and where that potential flavor may be coming from.

Bones come with three things: the actual hard calcified bone matter itself, the marrow within (which can be of red or grey varieties, the latter being the tasty fatty stuff you get at fancy restaurants and steakhouses these days), and the bits of connective tissue and fat that cling to its surface.

The bone matter itself (think: Halloween skeleton) is largely flavorless stuff that takes a long time to dissolve in water or fat, and thus doesnt contribute much to your meat, flavor-wise. The marrow is locked deep within the bones and can't be extracted efficiently unless the bones are cracked or sawed in half. Since you aren't serving cracked bones in a roast or a big steak, this shouldn't be much of a contributor either.*

Have you ever tried making a stock with whole, uncracked beef bones with no connective tissue? It doesn't work. You get a few dissolved minerals but not much aroma. To get flavor and body, you have to break the bones down and make sure that they host some connective tissue on their surfaces.

Finally, there's the connective tissue and surface fat. Here's where we might be able to make a case. Everybody knows that the tastiest bites of a prime rib are the sinewy, fatty bits you gnaw off with your teeth from the bone, right? So some of this great flavor surely must be making its way into the meat, right?

How Does Your Water Flow?

"squeeze that steak as hard as you can. Go ahead, squeeze."

Well not so fast. Despite the fun mental image, a piece of meat is not a sponge. Liquid does not flow freely in and out or within it. Don't believe me? Try this test. Dry the surface of a steak thoroughly with paper towels, then squeeze that steak as hard as you can. Go ahead, squeeze. Have your buddy the gorilla lend you a hand if he's free. Try and squeeze some liquid out of there. That steak you're holding is around 70 percent water. Surely you can get a few drops out of it? No?

Unless you've got superhuman strength, you won't see much liquid coming out, and that's because the liquid inside a steak is securely compartmentalized. It's for this reason that most marinades are largely ineffective at delivering much more than a surface treatment to meats. Even marinating overnight will only get you a couple millimeters of penetration. What chance do any flavorful compounds from the bone have in entering your meat during the mere hours it spends in the oven?

Ah, you might say. But doesn't that change when you start cooking? Surely water and flavor flows around more easily then?

It does! Moisture does start moving once you begin cooking meat and its muscle fibers start contracting. But it doesn't float freely; it doesn't ebb and flow. In fact, it only moves in one direction: out. There's nothing that would cause juices from an exterior portion of the meat (the bones) to move towards the center.

Now all of this theoretical talk is fine for us to theorize, but we're people of action, are we not? We demand empirical evidence!

I've got some of that!

To test this, I cooked four identical roasts. The first was cooked with the bone on. For the second, I removed the bone, but tied it back against the meat while cooking. For the third, I removed the bone, and tied it back to the meat with an intervening piece of impermeable heavy-duty aluminum foil. The fourth was cooked completely without the bone.

Tasted side-by-side, the first three were completely indistinguishable from each other. The fourth, on the other hand, was a little tougher in the region where the bone used to be.

What does this indicate? Well, first off, it means the flavor exchange theory is completely bunk—the completely intact piece of meat tasted exactly the same as the one with the intervening aluminum foil. But it also means that the bone does serve at least one important function: it insulates the meat, slowing its cooking, and providing less surface area to lose moisture.

Bone on its own is actually a superior conductor of heat than meat. However, bone is not solid—it has a honeycomb structure that includes many air spaces. Just like air spaces in home insulation guard against temperature fluctuations, so too does the bone protect the meat closest to it. This is where the expression "tender at the bone" comes from (meat near the bone is less cooked, thus more tender), and why it's important to insert your thermometer away from the bone when testing temperature; Testing close to bone will give you an artificially low reading.

And of course, the other advantage to cooking with the bone on is that it gives you all that wonderful gristle and fat to chew on.

Bottom line: The best way to cook your beef is to detach the bone and tie it back on. You get the same cooking quality of a completely intact roast with the added advantage that once it's cooked, carving is as simple as cutting the string, removing the bones, and slicing. 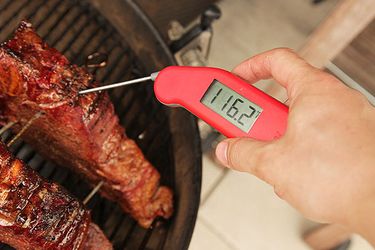