Since receiving word that he had been chosen for the highly selective Smorgasburg market in mid-March, Noah Arenstein had been working around the clock to get his business Scharf & Zoyer ready for opening day. There were electric griddles to be bought, cheeses to be tasted, and coolers to be rented. But before he even started, Noah hit two roadblocks out of his control.

First, the commercial kitchen space he arranged to rent fell through. He began reaching out to fellow food entrepreneurs, and secured a space at Hana Pastries in Sunset Park through longtime acquaintance Allison Robicelli. But as a result of this last minute shuffle, he only became acquainted with the space the night before Smorgasburg opened. And then he found himself without any help.

"I had lost my cook on Wednesday, and I was scrambling to find someone else," he told me. After interviewing and hiring the cook, Noah sent him an email confirming the details: only to be told by the cook that he messed up his calendar and wouldn't be able to make the first week.

After losing his cook just days before the market's opening, Noah knew he wasn't going to find a permanent solution by Saturday. Instead, he tapped an old roommate, Brad Young, to man the griddle, and planned on finding a more permanent solution later. (His luck changed when he met Kathy Blake, a culinary student at the International Culinary Center, who was looking for work.)

"It got to the point where I just needed someone I could trust, who was competent and could bring energy," Noah told me.

In the days leading up to Smorgasburg's opening day, he was still in the process of figuring out where to purchase his ingredients. Without any formal restaurant industry connections or stable help of any kind, it was up to him to find products that met his needs. That included farmers cheese for his noodle kugel sandwich (Tonjes Dairy Farm), bread from Midwood's Chiffon Cake Center, and a special-order croissant from Breads Bakery. Each ingredient requires its own set of tasks: scouring a restaurant supply store for tools, setting up a business account with Costco, and Zipcarring all over the city.

For the vendors, Smorgasburg begins well before the 11 a.m. opening. Noah's Friday started at 7 a.m. in Greenpoint, where he picked up coolers and a tent that he is renting from a friend. Afterwards, he drove down to Midwood to pick up bread, and then shuffled over to Sunset Park to drop his goods off at Hana Kitchen before swinging over to Costco. Later in the afternoon he made it to a restaurant supply store on the Bowery, before heading back down to Hanna to begin his shift.

"But there was stuff I didn't think of. It took like 30 minutes to break 200 eggs. Just to cook the noodles, there was a big vat of water to boil, a bunch of stuff and that takes a while to get up to temperature. And I was by myself. It was crazy."

"I wasn't ready to go until 5 a.m. the night before, and at that point I still needed to learn how to use a bunch of equipment I hadn't used before, figure out where everything is, he explained. "But there was stuff I didn't think of. It took like 30 minutes to break 200 eggs. Just to cook the noodles, there was a big vat of water to boil, a bunch of stuff and that takes a while to get up to temperature. And I was by myself. It was crazy."

After days of running around, largely in the dark, Saturday had finally arrived. Volume and the learning curve of a new kitchen kept Noah behind the stovetop until 5 in the morning on Saturday.

"I woke up at 6:15, got the car, and met Brad," who first had to pick up cheese at the Union Square Farmer's Market and specialty croissants from Breads Bakery. "We got on the highway, went to Sunset Park to pick the food and equipment up, and got to Smorgasburg around 9. It takes a while because everyone is bugging the guy who is coordinating it, asking where their stall is, and you have to wait a while," he explained. "I had one of those big iced coffees with a turbo shot from Dunkin' Donuts and I got into laser focus mode."

For a new, unknown business like Scharf & Zoyer, the first day at Smorgasburg is more of a feeler than anything else. It's a chance to make a first impression, to gauge interest and see how your food works, and evaluate your approach. Though he was happy with his first day at the market, he saw just how much he still had to learn.

"The goal was to just make it, and we succeeded at that," Arenstein said. "The first four hours were pretty much non-stop cooking, I thought I handled it well and found ways to make my space cleaner and do it faster and serve my sandwiches better. Not that I mastered it, but I'll be able to take a step forward."

Anatomy of a Smorgasburg Pop Up: Introducing Scharf & Zoyer » 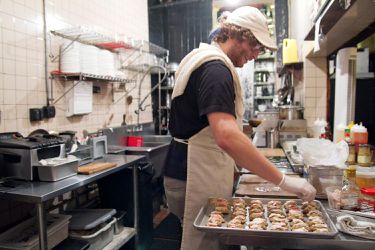