Hoagies, heroes, subs, wedges, po'boys, grinders, and the list goes on. No matter what you call your hometown hero, we're here to talk about America's best hot and cold versions—for now, we'll define it as a sandwich on a long individual bread or baguette. Whether the name refers to the people who eat them (Cubans, Italians) or the shape (submarine, torpedo, zeppelin), the long list of monikers should at the very least give you a hint of the importance and history of this most beloved and humble sandwich.

Perhaps the most widespread term, a sub is a sandwich served on a long Italian roll, topped with a variety of meats and cheeses, lettuce, tomato, onion, oil and vinegar, salt and pepper, and maybe oregano. Some Philadelphians see subs as only a poor substitute for hoagies, which must be served on a roll that's crusty on the outside and soft on the inside. No matter if you're hailing from Philly or Boston, some argue that a sub can only be cold with no lettuce, while others see hot subs as part of the pack.

In the New York area, heroes usually can come hot or cold. Some have even theorized that New Yorkers purposely pronounce gyro incorrectly as to not confuse it with the hero. In Ed Levine's epic 2003 New York Times piece on cold heroes, he defines them as thus:

The hero is a sandwich of cured Italian meats. These are layered into a forearm's length of fresh crusty bread, often with a few slices of Italian cheese and a condiment or two atop them — pepperoncini, yes; roasted peppers, yes; mayonnaise, an emphatic no. Also, perhaps, a splash of vinegar, certainly a drizzle of olive oil. Some ground pepper, a sprinkle of salt. But no more. No sun-dried tomatoes sully the interior of a true hero, no pesto, no Brie, no fancy pants ingredients at all.

If you find yourself in the New York City area, head over to Leo's Latticini (or Mama's, as it's fondly called) for some amazing hot heroes that feature turkey or roast pork with fresh mozzarella and gravy. I got to try my first Mama's creation at Shea Stadium, but I'm still waiting for the real thing in Corona Park, Queens (46-02 104th Street, Queens NY 11368; at 46th Avenue). And of course, over at Serious Eats HQ, the ultimate favorite in Italian cold-cut heroes can be found at Salumeria Biellese, where Ed's BYOB translates to Bring Your Own Bread (376-378 Eighth Avenue, New York NY 10001; at 29th Street).

Hoagies are said to have originated in Philly, where you may get laughed at if you ask for mayo on yours instead of oil. To make things more complicated, a cheesesteak hoagie is a cheesesteak with lettuce and tomato. The term is most popularly used in not only Philly, but parts of New Jersey.

These sandwiches don't seem to be particularly distinct from the aforementioned lot, except perhaps for region:

A term used in New England and the Midwest, grinder refers to toasted or warmed subs. In Philly, heroes, grinders, and subs are heated hoagies (depending on what part of Philly you're from). Some might distinguish grinders from toasted subs for having hot fillings to begin with. Jennie Grinders can be found in the Midwest, especially in the Des Moines, Iowa, area, and consist of Italian sausage, ground beef, green peppers, tomato sauce, and mozzarella melted in hoagie rolls.

Found on Louisiana French bread around the Gulf Coast, po'boys can be filled with fried seafood (shrimp, catfish, oysters, etc.), sausage, roast beef, or many other types meats. A "dressed" po'boy can come with mustard, mayo, tomatoes, onions, and pickles, while the "undressed" comes plain.

A long sandwich deserving a category of its own: thinly sliced steak, browned on a griddle and topped with cheese (for Philly authenticity: Cheez Whiz). Other cheese options are American and Provolone, and there's always onions, green and hot peppers, and mushrooms, if you like. With pizza sauce and mozzarella, you've got a pizza steak. In the New England area, a cheesesteak with onions, peppers, mushrooms, and Genoa salami or sausages becomes a steak bomb.

A remnant of French colonialism rears its head in this Vietnamese sandwich: pork roll, pork paté, pickled slivers of carrots and daikon, sliced cucumber, cilantro, mayonnaise, Sriracha and hot peppers—all stuffed into a toasted baguette. Other versions can include roast pork, meatballs, chicken, and sardines.

Though Nicky's has a lot of fans, my favorite banh mi is at Saigon Bakery in Little Italy, where it shares its real estate with jewelry vendors and serves up football-size sandwiches stuffed with some mighty tasty char siu.

A popular sandwich found in and around Chicago: thin slices of juicy roast beef in a long Italian roll, topped with sweet peppers or hot giardiniera (a spicy Italian relish that includes peppers, celery, cauliflower, carrots, oregano, and garlic). If you ask for it dry, the juices will be allowed to drip off of the beef before it gets put into the sandwich. The next step up is "wet" (juices left on beef), then "dipped," where the whole sandwich gets a quick dunk into the roasting juices. Ask for it "juicy" and it'll take a longer dip, while "soaked" will be as sloppy as it can get. Eaten with the "Chicago lean," the Italian Beef can also be topped with mozzarella or provolone. Some proud Italian Beef fans may claim that the only means for authenticity is to have it at least dipped—but over at ItalianBeef.com, they say "Real Chicagoans eat their sandwiches any damned way they want to." Not going to argue with that.

A neater version of the Italian Beef, French Dips are served au jus—its hot juices on the side and without the giardiniara. Although two different restaurants in Los Angeles claim to have invented the French Dip, both originally dipped the sandwich in the juices rather than serving it on the side.

A sandwich that makes me want to hop on a flight to Miami: roast pork, ham, Swiss cheese, sliced pickles and mustard on Cuban bread, toasted in a plancha. Traditionalists may frown upon it, but other versions may include salami, mayonnaise, lettuce, and tomato.

I took this photo of Margon's cuban in Midtown Manhattan. With its addition of salami slices, some may call it heretical. I just call it delicious.

Native to certain Boston neighborhoods like the North End, the terms comes from the roll used: the spucadella, which tends to have pointier ends than subs and are top-split. Other spelling variations include "spukies" and "spukkies."

Our own Adam Kuban ventured out on a very cold night in Ithaca, New York, to try the original French bread pizza sub at the Hot Truck—French bread split and slathered with tomato sauce, cheese, and all sorts of toppings, then baked open-faced.

Author's note: British Sandwich Shops— When I studied at Oxford last year, I loved that the city was filled with sandwich shops like the beloved Alternative Tuck Shop and the Oxford Sandwich Company that made sandwiches on long narrow baguettes for only a few quid. My favorite combinations included steak with brie, mushrooms and horseradish; rocket, goat cheese, and fig paste; and the mayonnaise mess that was the duck and scallions baguette from the Campus Buttery. I've yet to find anything in like it back in the States. 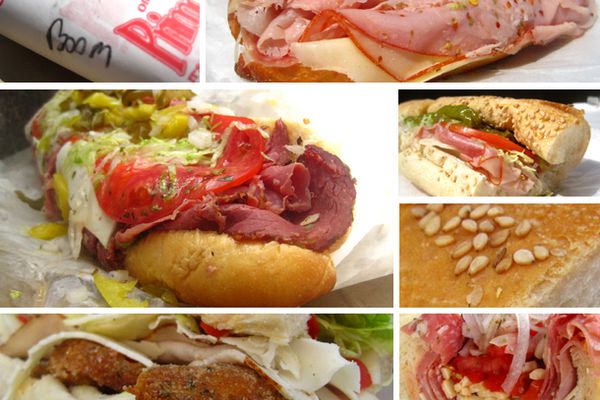 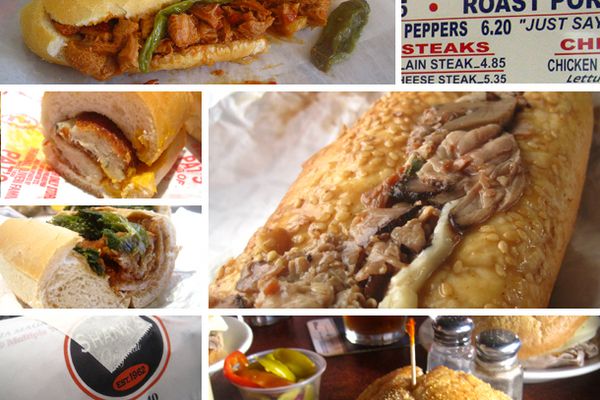 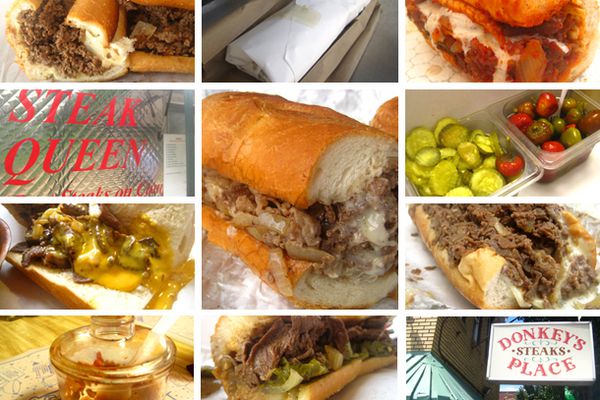 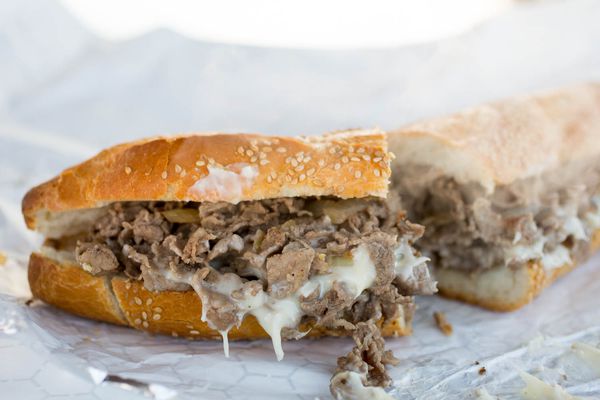 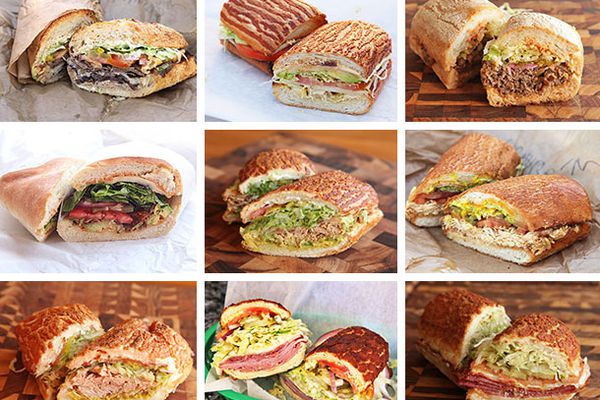 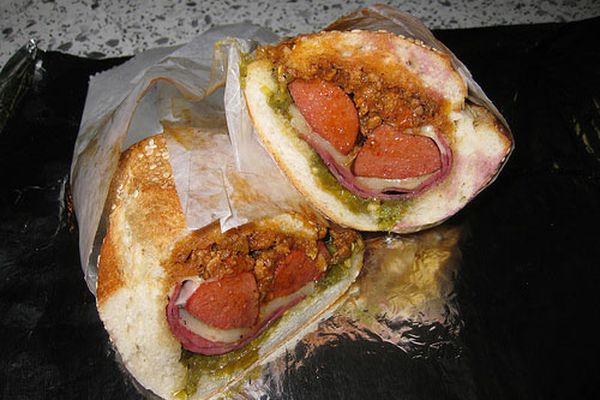