Easter comes early this year, which means that Mardi Gras is just around the corner. The tradition of enjoying heavy and fried dishes on Fat Tuesday dates back centuries, as it was the last hurrah for many Christians before the somber 40 day period of Lent when the consumption of meat, eggs, and dairy was forbidden.

Last year I explored pączki, the Polish, deep fried jam or jelly-filled doughnuts which are popular in regions around the country with sizable Polish-American populations like Detroit and Chicago. But in truth, there are few places in the States as closely associated with Mardi Gras as New Orleans, And while NOLA has gifted us with many wonderful additions to American cookery, beignets are on my mind with Mardi Gras so near at hand.

For folks outside of New Orleans, the square, fried fritters which are covered (perhaps buried) in powdered sugar are probably most closely associated with the French Quarter's famed Café Du Monde, a coffee shop established back in 1862. Alas, while my travels have yet to take me to Café Du Monde or New Orleans for that matter, both are high on my to-visit list. Instead of relying on memory for my beignet inspiration, I hit the books for some research.

My hunt for a terrific beignet recipe lead me to the sixth edition of the The Picayune Creole Cook Book published in 1922 by the Times-Picayune Publishing Company, which has since been revamped several times over for the modern cook. I tried out the "plain fritter" recipe in the 1922 edition and was surprised to discover that the recipe was heavy on eggs—you need 4 of them—and used only baking powder for leavening. The recipe said "a fritter that is well made should be light and fluffy." Well, I can tell you mine came out sort of fluffy, but started to deflate in fairly short order. And the flavor was more akin to an eggy, deep-fried French toast than the puffy yeasty square that I was expecting based on beignets I've had elsewhere.

Luckily, Serious Eater bobcatsteph3 pointed me in the direction of a terrific post about beignet hunting by Rebecca Marsters from Cooks Country Magazine. It inspired me to play with some of the doughnut making skills I've acquired over the life of writing this column, and I ended up with my own yeasty, puffy, pillowy beignets fit for serving on Mardi Gras or any morning when you have time for some breakfast time frying. Beignets are best served warm, so gather a crowd around the table and be sure to stock up on plenty of powdered sugar and chicory coffee. 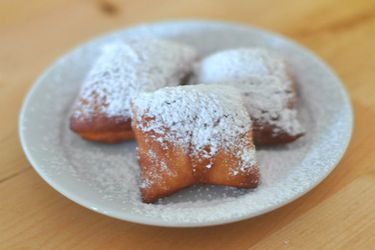