You probably know Amanda Hesser as the mastermind behind Food52 and the author of Cooking for Mr. Latte, but you may have missed her epic Essential New York Times Cookbook, thinking perhaps that it was simply an update of the Craig Claiborne classic.

It's not. Hesser took on the entire newspaper's food archives—reaching back as far as the 1850s—to dig up the best and most beloved recipes ever published by the Times, and to get a sense of what Americans were cooking and eating over the past few generations. The tally of recipes tested? 1,400. I recommend checking it out.

I recently caught up with Hesser to ask her about beloved recipes and cookbook authors, her favorite cookbooks for baking, for hosting, and for giving as gifts. Here's what she had to say.

How many cookbooks do you own? What do you look for in a cookbook?

Rough estimate: about 600. I'd like to have fewer because I feel they add psychic weight to our apartment, but I'm also deeply attached to them. Whenever I begin to think about paring down, I get into a funk and end up feeling paralyzed. (This is why Task Rabbit was invented—for people like me who get too emotional about their belongings.)

I'm partial to household manuals, which have a mix of recipes and household tips—I like the idea of a single source that you can rely on. These manuals were popular in the 19th century and earlier. When I got married, a friend and mentor gave me a set of Martha Bradley's The British Housewife, which covers everything from making jam to taking care of your farm animals. It was a perfect gift, although my husband probably doesn't feel the same way about it.

I look for character in a book—I want a book with great voice or photography, a point of view to consider. Even just a well-designed book can make me happy. Marcella Hazan's first books had both an uncompromising point of view as well as excellent design, and that's why I turn to them regularly.

A cookbook that I'll never use but that I love for its extreme passion and madness is Vincent and Mary Price's A Treasury of Great Recipes, which catalogs recipes and photos from the world's top restaurants in 1960s. The cover is padded (decades before Plenty!) and embossed with gilt swirls. It's a gem.

What lesser-known cookbook authors do you think deserve more love?

I'm putting in a vote for Meta Given, whose books were less expensive and more utilitarian—a Joy or Mastering the Art of French Cooking for the mainstream. My mother lived by her Modern Encyclopedia of Cooking, and I still make Given's pie crust and white bread. Her baking recipes are a strong point.

"I worry that people in their 20s don't know enough about Maida Heatter."

Also, I worry that people in their 20s don't know enough about Maida Heatter, who was discovered (like Marcella) by Craig Claiborne. Maida is one of the best baking writers ever and she influenced generations of pastry chefs and food writers. There's nothing special-seeming about her recipes, but she has a way of teaching you how to bake as you make them, so that you're not so much following a recipe but becoming a better skilled and more thoughtful baker.

What cookbooks do you turn to when you're cooking for a crowd?

I turn to my Italian cookbooks—Marcella, Mario, Nancy Jenkins, and Sara Jenkins—because Italian food scales up well and is crowd-pleasing.

What are your favorite cookbooks for baking?

I've already gushed over Maida, but my absolute favorite baking book is The Italian Baker by Carol Field. No one had ever heard of ciabatta or pane pugliese before she published this book. She spent time with bakers all over Italy and introduced dozens of delicious regional breads to readers.

The Roberta's Cookbook has a recipe for roasted garlic dressing that's basically another way to combine my favorite ingredients: garlic, anchovies, mustard, olive oil, and lemon juice. Some of the garlic is roasted, some is left fresh, and the recipe comes together as part dressing, part mayonnaise. I can't get enough of it. We make it in double batches and keep it handy in the fridge. There are other recipes in the book that I've made and liked and many more that I'd like to try, but if I can find one recipe from a cookbook that feels new and delicious and that I want to make for the rest of my life, then the book is a treasure.

What cookbooks would you recommend as gifts?

For anyone who likes French food, I'd buy them French Regional Cooking by Anne Willan. It's comprehensive—she covers all the classic dishes better than any book I know—and little known so you wouldn't have to worry about the recipient already having it.

What's the most beautiful cookbook you own?

Daniel Patterson's book, Coi, is filled with stunning photography. No other book from the Bay Area evokes such a clear feeling of the land and its bounty. 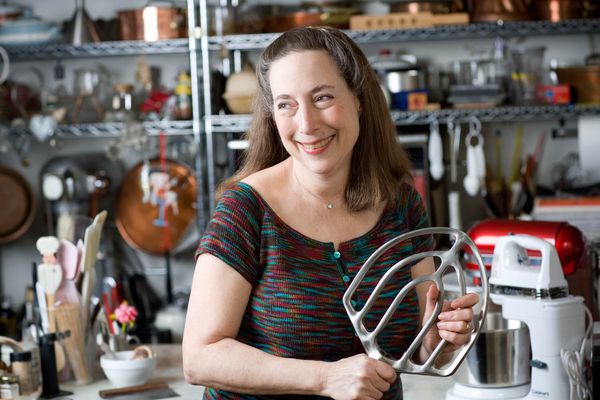