Samosas, the triangular parcels of fried, flaky dough wrapped around fillings of all kinds, are a very popular treat in South Asia. Everyone loves them, just like everyone loves to eat dumplings, empanadas, and pierogi—there’s something universally appealing about stuffing delicious things into dough.

While they're commonly associated with the countries in the subcontinent, samosas have a far wider reach. There are many versions of samosas in other countries, like the sambusas made in Ethiopia and the chamuças of Portugal. The earliest mention of a samosa-like thing can be traced back to ancient Persia, to the sanbosag, a crisp, deep-fried pastry that was filled with ground meat and fruit.

But even if we limit our discussion to the samosas found in South Asia, there are countless kinds. The ones filled with spiced potato and peas may be the most common, but there are also samosas filled with root vegetables, lentils, spiced ground meat, poultry, and even shrimp. Sweet samosas can be filled with chocolate and fresh or dried fruit; I once even had a samosa stuffed with ice cream.

I want to walk you through how to make the classic savory samosa, one stuffed with spiced potatoes and peas.

How to Make Samosa Pastry

The pastry for a samosa is very similar to pie dough. To ensure that the cooked dough has a flaky texture, your main concern is controlling gluten formation, which can be accomplished in two ways. The first is to add a relatively large amount of fat into the dry flour mixture, rubbing it in so that it coats some of the flour particles thoroughly; the coating of fat will prevent some of the flour from mixing with the water, thus inhibiting gluten formation. The second is to use cold water to bring the dough together; the warmer the water (up to a point), the more easily gluten forms.

No matter what filling you use to fill your samosas, you have to follow two general rules to ensure that your samosas come out crisp and delectable.

The first and most important is that you want to make sure your filling isn't overly wet. Wet fillings will seep into the pastry and make it soggy, and a soggy samosa is one of the worst things in the world. For a filling like spiced potatoes and peas, one of the best things you can do to prevent the mixture from becoming too wet is to drain the potatoes as soon as they cook; do not under any circumstances let them sit in their pot of water as they cool.

The second rule is that whatever filling you're using should be completely cool. This helps with the first rule, as anything that is steaming hot is still shedding heat and moisture, and the less moisture the better. But a hot filling will also make the samosa wrapper dough very soft and difficult to work with.

How to Stuff and Form Samosas

Stuffing samosas requires a bit of patience, but all it takes is a little practice to get the hang of it. I recommend sitting down and grabbing a child, partner, or friend (or all of the above!) to help. You'll want to set out your dough, your filling, a spoon for every person wrapping, a sharp knife, and a small container of water. You'll also want to have on hand a baking sheet and a clean kitchen towl, both dusted with flour, for holding on to the completed samosas.

While you don’t need to work with chilled dough, dough that's at cool room temperature works best. If it's too warm, it will be too soft and difficult to handle. (For tips on working with a dough despite warm weather conditions, see Stella’s hot-weather baking tips.) To keep the dough cool, as I said above, the samosa filling must be completely cool, too, before use, or else the heat and steam emanating from the filling will soften the pastry and make it difficult to work with.

When you're ready to start folding samosas, divide the dough into individual pieces. Working with one piece at a time, shape each piece into a small ball and then roll it out on a lightly floured surface to form a circle. Cut each of those circles in half with a sharp knife, and each semicircle will then be used to form a samosa.

Working with one semicircle at a time, dab a finger or a brush in a little water and wet the edge of one half of the diameter of the semicircle. Fold the wet edge over the opposing dry side and press gently to seal to form a cone. Make sure the tip of the cone is pointy and completely sealed or else oil can seep into the filling as it's fried.

Once the cone is formed, add the filling; this will take some practice. If this is your first time, I recommend starting with a smaller amount of filling that you’d expect.

Hold the cone between your thumb and finger in one hand, with the open pocket facing you. Using a spoon, stuff the hollow cone with about three tablespoons of filling, pressing gently to nestle it in. You should have a little bit of room at the top, just enough to flip the open end over itself and seal the cone. Don’t push too much or the pastry will stretch or, worse, tear.

When the samosa is filled, dab the inner side of the top flap at the open end of the cone, fold it over to meet the opposing side, and press gently to seal and form a triangle. Pay close attention to the three corners of the samosa; all the edges need to be sealed or else the samosa may come apart while frying.

Keep the assembled samosas on flour-dusted baking sheet covered by the flour-dusted kitchen towel; the flour will prevent them from sticking and the towel will keep them from drying out.

Samosas are often fried in ghee. I prefer to fry samosas in a neutral oil, which both keeps the flavor light and is far more cost effective. Look for a neutral oil with a high smoke point like grapeseed. While canola oil is also an option, I've noticed it leaves a fishy smell after a few rounds of cooking, so I tend to avoid it.

The ideal temperature range is between 325° to 340F° (165°C to 171°C). I start the frying process at 340°F, as the samosa will initially drop the temperature of the oil, then maintain the oil temperature around 325°F while frying.

Before the samosas go into the hot oil, be sure to dust or brush off any excess flour, as the excess flour will fall into the oil and burn as you cook batches of samosas.

One good thing about these recipes—most samosa recipes, really—is everything can be made in advance. Make the filling or the pastry (or both) a day in advance, depending on your schedule, then assemble the samosa whenever you’re ready.

You can also fry the samosas in advance and enjoy them later. Let them cool, put them in zip-top bags with the air pressed out, and freeze them. When you want to eat them you can rewarm them in your oven—frozen or thawed! Unfortunately, raw samosas don’t freeze well, as the filling tends to weep as it thaws, which ends up making a pale and soggy mess.

Samosas should ideally be eaten hot out of the fryer, but they can also be eaten warm. I like eating savory samosas with Maggi’s Hot and Sweet ketchup, a classic samosa accompaniment from India (you can find it online and in Indian grocery stores). But samosas are also commonly served with an herb chutney made with mint or cilantro, or with a sweet tamarind chutney.

Whether freshly made, or made in advance and refrigerated, let the samosa filling come to room temperature prior to use (between 68°F and 77°F (20°C to 25°C). When too warm, it may melt the dough, and when too cold it may not cook through while frying.

Take care not to let excess flour get into the oil, or else it will continue to cook and burn, leaving an unpleasant flavor in the oil and samosas alike.

If Kashmiri chile powder is unavailable, blend 3/4 teaspoon smoked paprika powder and 1/4 teaspoon cayenne powder together. Measure out 1/2 teaspoon of this mixture to use as a substitute.

The potato and pea filling and the samosa wrapper dough can be made up to one day in advance of assembly and frying. Fried samosas can be stored, when completely cool, in a sealed ziptop bag with the air pushed out and placed in the freezer for up to 3 months. To reheat, place in a pre-heated 350°F (175°C) oven, either frozen or thawed, for 20-30 minutes. 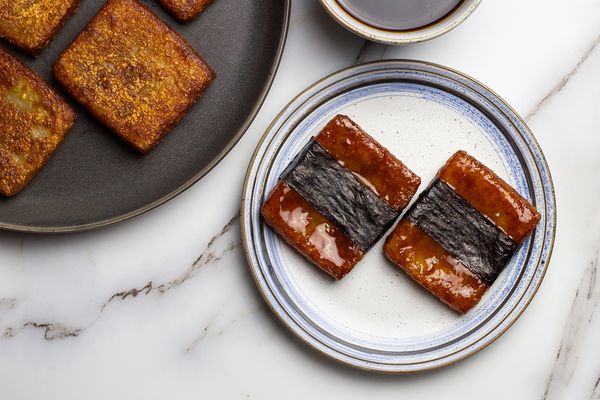 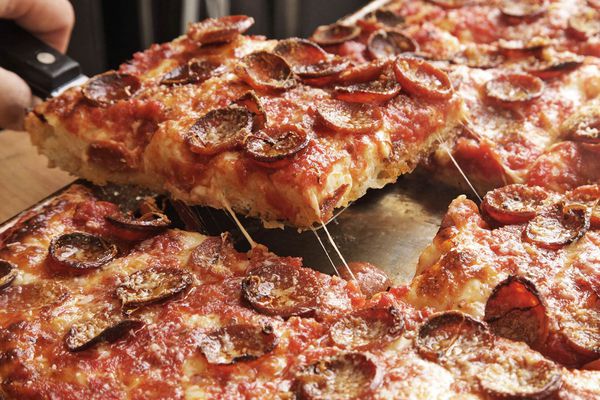 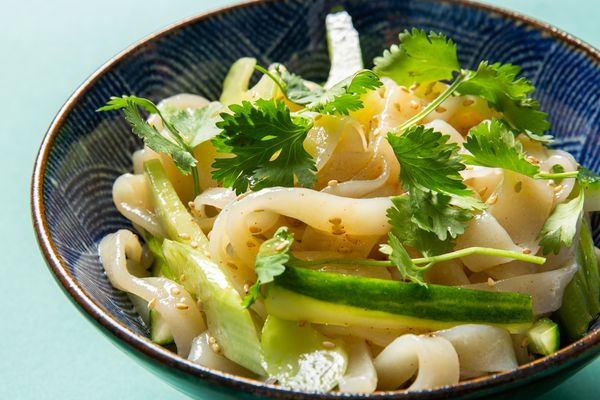 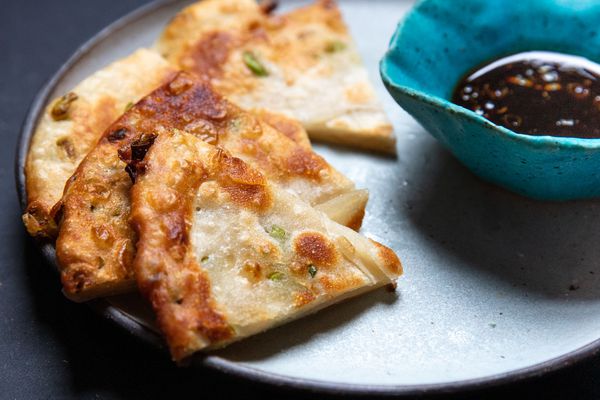 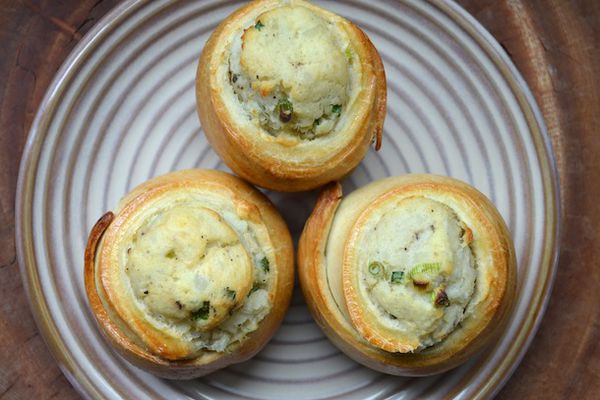 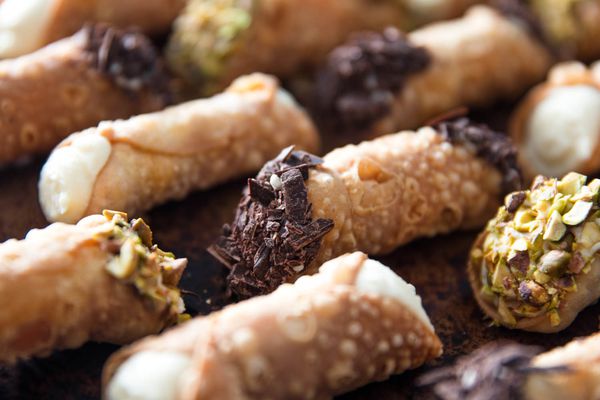 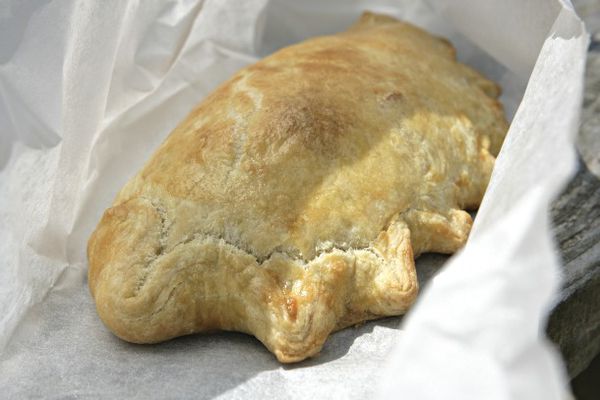 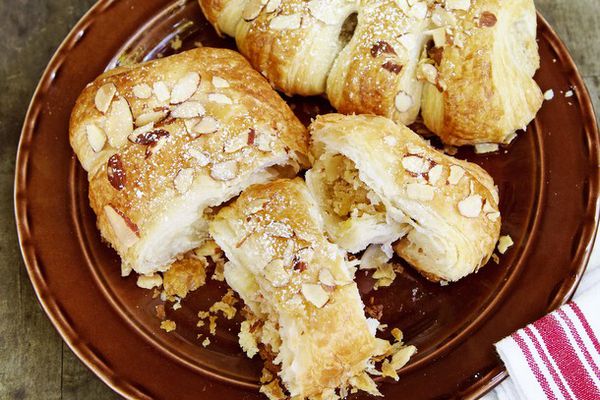 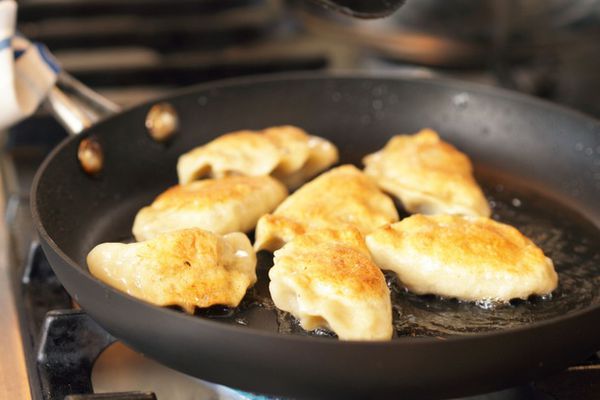