I had no trepidations about what I would find when Slice founder and former SE editor Adam Kuban invited me to the first friends and family tasting for an eventual bar-pizza pop-up he's hoping to hold at noted pizza newcomer Emily, during the Clinton Hill restaurant's off-hours.

I know well the results produced when Adam puts his mind to something. He is the type of obsessive craftsperson that the best pie men and women all seem to be. For the past year, he has been developing his pizza-making at Paulie Gee's superb namesake pizzeria in Greenpoint, while simultaneously honing his bar pizza recipe at home. Margot's Pizza, named for his toddler daughter, is the result.

And, just as I'd anticipated, the evening became a party and a celebration of Adam and his assistant bar-pizzaiolo, Tim Nguyen (a Paulie Gee alum and former finance guy who now works at Emily); of Paulie Gee, whose generosity of spirit and general good cheer turns every night at Paulie Gee's into a pizza party that he just happens to be hosting; and of Slice itself, which now has at least two distinguished alums who have turned their passion for pizza into a career path filled with pride and hard work and distinction. I guess that one thing folks working at and reading Serious Eats have learned is that you can ignore conventional wisdom and put your heart and soul into creating something that's meaningful for you, and have it result in something that has meaning for other people, as well.

Emily itself is a long, narrow space with a gorgeous wood-burning pizza oven brought over from Italy and assembled here courtesy of a Kickstarter campaign. It's run by Emily Hyland and her husband Matt, a classically trained chef turned pie man. Emily and Matt didn't serve their pizza at Adam's pop-up, but Matt has worked on his own pizza craft at Sottocasa, as a partner at Brooklyn Central, and most recently at the Pizza Moto trailer. When I heard the way they talk about pizza and the mozzarella and ricotta they make fresh every day, I knew that their place, usually closed on Tuesdays, was an appropriate spot for Adam's foray into perfecting his bar pies.

What is bar pizza? It's thin-crusted pizza cooked in a pan, the base moistened with oil and the pie modestly topped, usually cooked in a conventional gas oven at a tavern of some kind. I've had it in southern New England, Long Island, New Jersey, and Chicago, though Adam thinks it's most prevalent and may have been invented in South Shore towns in Massachusetts. I wrote impressionistically about bar pizza in my pizza book and thought I may have coined the phrase "bar pie" until Adam told me at the gathering that Eddie's in New Hyde Park, LI, has called itself "the home of the bar pie" for a long time now.

That said, the bar pies served at Eddie's, which has been operated by multiple owners in the 73 years it's been in business, are fine, but they're not up to the level of Adam's bar pies. And the fact that most people in the New York area taste Eddie's Pizza from one of their many trucks means they're eating pre-made crusts that they bear little resemblance the kinds of pies serious Slice'rs would commend.

But I'm not here to talk about Eddie's. I'm here to tell you that Adam's bar pies, based on a single sampling, are more than ready for prime time. I tried four: the plain Margot-rita pizza (sauce, Romano, a blend of mozzarella and other cheeses, and basil); a three-mushroom pie elevated with an Italian black truffle cheese (sottocenere) that Emily uses on its namesake pizza, which actually tastes like black truffles rather than truffle oil (most versions of which should be banned in this country and elsewhere); a version of the "Famous Original A," a secret menu item at Paulie Gee's featuring just sauce, Romano, Parmesan, sausage, and onions; and a pepperoni slice enlivened by just the right amount of Romano cheese. He made two more that night—one featuring semi-dried cherry tomatoes inspired by Di Fara, and one called The Love Supreme (sauce, Romano, his mozzarella blend, green peppers, and onions)—but I left before they came out of the oven. Regardless, by that time my verdict was long in.

Across the board, the dough was crisp, thin (but a little thicker than cracker-thin), and not too oily. And, unsurprisingly, the toppings were judiciously applied and made perfect sense in combination. In my book, they're already as good as or surpass the bar pies at Star Tavern in NJ, Colony Grill in Stamford, CT, and Vito & Nick's in Chicago.

So congrats, Adam. Big props to you and Tim and Matt and Emily. Maybe unjustifiably so, I feel like a proud papa whose son has gone off to the pizza wars, knowing not just that he will survive, but that he will thrive and prosper and be doing exactly what he was put on this earth to do. How much prouder can a father get? 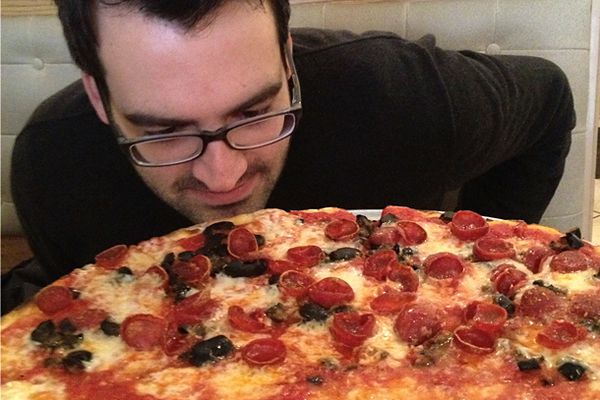 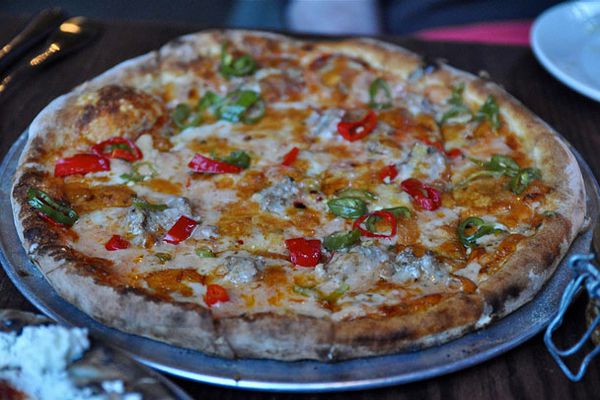