While we've long been fans of Twitter, one of the biggest digs critics take at it is that it's full of pointless chatter.

But one of the more interesting and truly useful trends sparked by the microblogging service is the way street-food vendors have flocked to it to relay info to customers. This is particularly helpful with vendors who switch up locations from day to day—or hour to hour. In retrospect, it almost seems like Twitter was made for this purpose. What better way for a roving kitchen to publish crucial intel, from the field, without a dedicated internet connection?

For your convenience, we've compiled a list of street vendors on Twitter, divided by region. You'll find it after the jump.

Kogi BBQ Twitter: @kogibbq URL: kogibbq.com Korean-inspired tacos, burritos, drinks, and more for hungry late-nighters. Based in Los Angeles, but starting to travel more. Read our Q&A with the truck itself.

Joes on the Nose Twitter: @joesonthenose URL: joesonthenose.com/Aloha.html An organic espresso bar from an orange truck in San Diego.

Green Truck Twitter: @Green_Truck URL: greentruckonthego.com From the packaging to the organic produce to the solar-powered commissary, this truck is all green.

Amuse Bouche Cart Twitter: @AmuseBoucheSF Muffins and chai for a dollar. The self-proclaimed "home of the original recession buster breakfast."

Mobile Pho Truck Twitter: @whatthepho Fresh noodles and broth all over the Bay Area, including Millbrae, outside AT&T Park, and the piers.

The Tamale Lady Twitter: @tamalelady Her Twitter feed is blank right now, but surely the Tamale Lady will get around to updating (after making her pork with red sauce).

Rickshaw Dumplings Twitter: @RickshawTruck Dumplings and dipping sauces from a truck covered in funny slogans like "Who's Your Edamame?"

Food Shark Twitter: @foodshark URL: foodsharkmarfa.com Based in Marfa, Texas, this truck sells Mediterranean-by-way-of-West-Texas food. Like "marfalafel," or falafel served extra spicy (with lettuce and onion) in a flour tortilla rather than pita bread.

Sweet Republic Twitter: @sweetrepublic URL: sweetrepublic.com/events.html The artisan ice cream shop also has a 1959 Chevy that drives around to farmers' markets and other events in Phoenix.

Two Ways to Get Your Truck/Cart Out There

Use '#streetvendor' Hash Tag to Make Yourself Searchable on Twitter

We might also suggest tweeting out a #hashtag tweet that simply says #streetvendor. That way, anyone doing a Twitter search for "#streetvendor" will see you in the results and can start following you. (#streetvendor seems the most logical hashtag to use; as of initial publication of this blog post, no one has yet used it.) 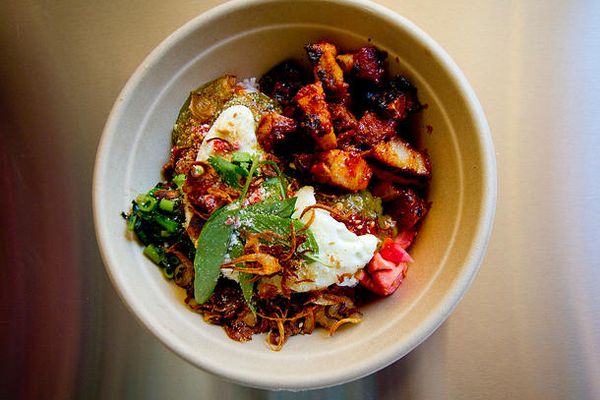